I haven't actually spent all of the last month moaning about Warhammer Age of Sigmar; I have made some progress on my Warhammer siege project.

Firstly, the fortress is finished. I finished off the gate and towers in much the same way as the walls. Which is to say, spraying them wolf grey, adding blank ink and then two levels of drybrushing followed by some umber ink scattered about to make it look lived.

For the towers and gates, I also had to worry about doors. These were also dealt with pretty quickly. I painted them Vallejo leather brown, gave them a wash of Games Workshop Agrax earth shade (dark brown basically) and a light dry brush of Vallejo tanned leather. I then painted the metal bits in Vallejo steel with a bit of black ink to take the shine off (literally). 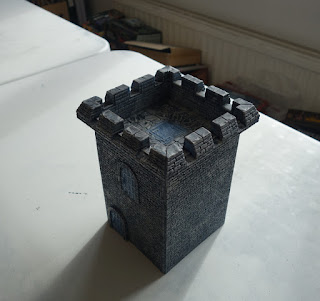 Tower, before the doors were done

But, despite this being a siege campaign, I don't actually need the the fortress for the first scenario and possibly won't need it until the end. Following the rules laid out in Warhammer Siege, I randomly generated the first scenario which would either be "Send for Help" in which the besieged see the besiegers coming and send out a messenger or "Forlorn Hope" in which a besieged patrol encounters the besieger vanguard and tries to delay them for as long as possible.

For this scenario I needed an appropriate scenery piece for the patrol to defend. For this I dug out an old ruined fort I had in my scenery cupboard. The fort was made in the late 1990s by Target Games, then the publishers of Warzone and Chronopia, but it was a nice, versatile piece of scenery and has served me in unpainted form in a number of games.


I painted in pretty much the same way as the fortress. The only difference was that I painted the patches of moss in Vallejo olive green, with a wash of Games Workshop Thraka green to give them a bit of depth. Like the fortress they don't stand up very well to close inspection, but should look fine on the table where focus should be on the models. 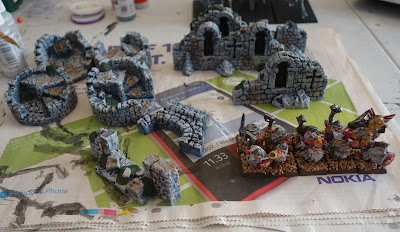 Speaking of which, part of the appeal of the siege campaign was that I had two armies, Dwarfs and Chaos Warriors, I could use that were already painted, mostly. I still have a few unpainted models on both sides that I wanted to use. The first of which was my Dwarf Longbeards.

The Longbeards were originally released at the tail end of Warhammer 3rd edition. They were released by Marauder miniatures, which was a semi-independent division seperate from Citadel, in much the way that Forge World is now. When I started collecting, they were pretty much the only part of Games Workshop producing new fantasy models and they had a page or two to themselves in each White Dwarf. These models were the only "official" Longbeards all the way through fourth and fifth edition, so they veterans in more ways than one. 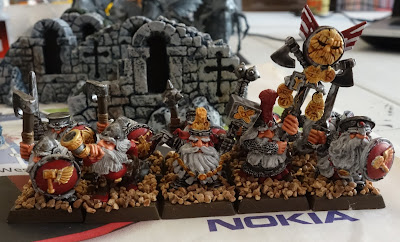 My Longbeards were some of the first models I got for my Dwarf army back in 1996 (God I feel old). At the time, GW sold most fantasy models in packs of four, but command groups in packs of three (Champion, Standard Bearer, Musician) which made it obnoxiously difficult to build a regiment of a sensible size without having left over models. For years, my Longbeards served faithfully as a unit of 19 usually bulked up with the edition of a character, such as Runesmith.

I retired the Longbeards at the start of 6th edition because I was immediately drawn to the new Longbeard models just released. I planned to buy a whole new regiment of them but, when the time came, whatever had drawn me to them seemed to fade away and I bought Hammerers instead. Despite this, the old Longbeards remained retired and so I didn't bother to paint them when I painted the rest of the army.

For the first scenario of my siege campaign I wanted a Dwarf unit with a bit of punch, so I dug out the Longbeards and a quick flutter on Ebay got me the elusive twentieth member of the unit. I only need ten for the first scenario, so I focused my efforts on getting ten done over a long weekend. 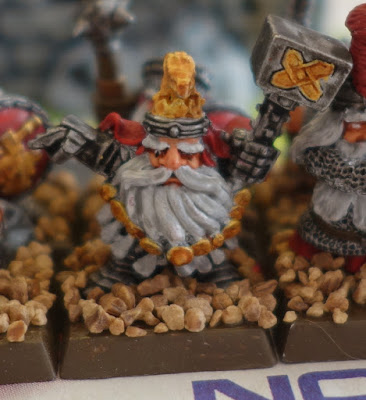 I kept the painting simple. I sprayed them all with Army Painter Plate mail and gave the areas that would stay metal a was of black ink. Cloth was painted red, in keeping with the rest of the army, with gloves and pouches in leather brown. I painted the beards in Vallejo silver grey, which is almost white, but gave them a light grey wash to add some depth. The bases were painted leather brown and flocked with small stones to maintain consistency with the rest of the army. Their original shields had long since gone walkabout, so I replaced them with some leftovers from the plastic dwarf warrior box.

With the models and scenery finished, I just have to play the game.