With Mantic's open day last weekend and my recent foray into Realms of Chaos I have had both Warhammer and Kings of War on the mind. One of the more distinctive features of KOW is the way in which it treats units. In Warhammer the basic element is the model and units are made of groups of them, while in Kings of War the basic element is the unit, it has its own stat line and is moved and removed as one element.

When playing a KOW style game, you tend to assume that the unit does not necessarily represent the number of individuals on the table. There might be twenty models, but your would tend to assume that that represents several hundred or even thousand individuals. The exact number is less important than the unit's abaility to project power on the field. For that reason the unit is removed all at once. The fate of individuals doesn't matter, when the unit is removed it is assumed that the unit is no longer able to fight effectively either because everyone is dead or has run off.

You wouldn't necessarily think this in Warhammer. When each model has its own stat line, it feels like an individual. But this doesn't actually make sense in practice. For a start, the units in Warhammer behave like much larger bodies. There may twenty men (or Orcs or Elves) on the table, but they move and fight like formations of several hundred. They stay in formation, can't manuevere easily and don't break formation except in route.

Looking at things on a larger scale, Warhammer-style games use maybe 100 to 200 models. Real historical armies run to thousands or even tens of thousands. Even the largest Warhammer battle represents only a skirmish in historical terms. And yet the conceit of the Warhammer game is that battles involve Emperor's, Kings and Warlords.

Both styles of game involve an abstraction. In KOW style games you assume that each unit represents more individuals than seen on the table. In Warhammer style games the abstraction happens almost in reverse. You assume that units and individuals behave like much larger formations than they actually represent. Either way, the effect is to simulate a massive battle with a much smaller number of models.

This division of model versus unit is common in historical wargaming. Warlord's Black Powder, Hail Caesar and Pike and Shotte all use the unit as the base element. Field of Glory and its successors as well as DBA and DBM use a similar system, of multiple models on a single base, even if they are not necessarily called units. In the other side, Clash of Empires follows a similar system to Warhammer, with units of individual models.

While the unit versus individual concept cuts across fantasy and historical gaming, in one area historical games usually fall on one side and fantasy on the other and that's in the handling of characters. In the Black Powder family, Clash of Empires, Field of Glory characters are essentially order givers. They enhance the fighting ability or units and/or are required to allow them to activate, but they don't fight units directly.

In contrast Warhammer treats characters as particularly capable individuals able to join and leave units and fight on the same level as other individuals. Kings of War goes even further. Characters are units in their own right and a single hero can fight on even terms with a unit of 20 or more models. This makes sense, while in the real world no individual, no matter how capable can fight more than two or three at a time successfully, in a fantasy world mighty heroes really can take on entire armies and win.

So many games use abstraction to deal with numbers, but the exact way it's managed varies from game to game and genre to genre.
No comments:

A Jolly holiday with Mantic

Bit of a digression from my previous post here, because I spent most of the last weekend in Nottingham and most of Saturday at the headquarters of Mantic games. It being the occasion of Mantic's open day. I had managed to acquire a ticket as a free bonus for having pledged some money to their Kings of War Kickstarter and so I and MLB decided to make a weekend of it. 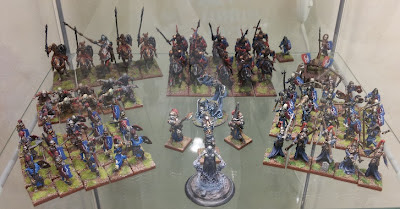 Suffice it to say, Mantic's HQ is not quite on the same scale as that of another significant Nottingham-based miniature company and doesn't have any massive bronze statues outside either. It consists of a handful of semi-ventilated offices and a warehouse out back. But Mantic attempted to do as much with the space as possible. The front end of the warehouse had been cleared to provide space for Warpath and Kings of War gaming tables and a decently sized retail stand. Much of this space was dedicated to testing out Warpath 2.0 and showing off the new Enforcer models (which look more like they've escaped from Iron Man 2.5 than Space Marines). There was also space for a large scale Undead vs Dwarfs Kings of War game in which Mantic's models were supplemented with Reaper Werewolves and an Undead Elephant/Mammoth of uncertain origin. The Warehouse surroundings, if anything, added to the atmosphere as gamers shared space with still to be assembled miniature boxes and paper inlays.

Off to the side of the warehouse, Golem painting studios offered painting tutorials for Undead and Enforcers. Getting on on these required an additional £20 fee, but came bundled with a box of models. MLB spent some time learning how to paint flat surfaces and certainly got his, by which I mean my, money's worth as he was in there for two and a half hours.

Upstairs, in a short corridor of offices, sculptor Bob Naismith spent half the day holding court and showing off the early versions of the impressively huge Abyssal Golems. The major attraction of the day was opposite in the "Jake room" in which Jake Thornton's board games Dwarf King's Hold and Project Pandora played a supporting role to the four demo games of Dread Ball. 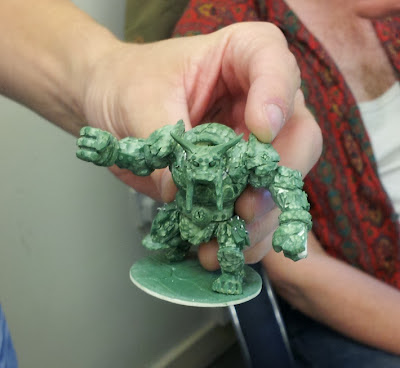 Following a highly successful Kickstarter campaign, Dread Ball is looking like Mantic's breakout hit and the demo games stayed busy throughout the day. The demo version reduced the number of players on each team and started the action two-thirds of the way through the game in order to keep things simple and maximise turnover. The game itself plays very swiftly; it is perfectly possible to score in a turn with a reasonable degree of luck. But, the fact that models are not reset after scoring, with the ball returning to the centre, means that you have to keep an eye on the position of your whole team. While there is an element of risk management, if you lose or fail to pick up the ball your turn, or rush, is over, the game is much more about resource management than Blood Bowl. You have fewer action tokens than players, which means not every player will act each rush, but you can play more than one action token on a player if you wish. This allows for faster scoring, but can leave other players out of position. With better quality game pieces than I have seen from Mantic and some very well sculpted players I could see this game becoming a major hit.

At the end of the corridor Mantic head honcho Ronnie Renton and Jake Thornton spent most of the day in seminars with whoever showed up. These took the form of surprisingly candid Q&A sessions with a fair bit of discussion of future plans.

Dread Ball was, unsurprisingly, a prominent feature. Mantic clearly have big plans, with four supplements outlined and, thanks to Kickstarter, largely funded. The intent is for the first three to introduce new teams, before the fourth "Dread Ball" extreme introduces the illegal "street" version of the game. This sounds genuinely fascinating as the teams will not have fixed rosters, but instead be recruited game to game by shadowy "backers". These backers can potentially hire any kind of player, but will get significant bonuses to certain types depending on their background, so an alien ambassador will get cheap aliens, a mad scientist cheap mutants and genetic modification. Overal, it sounds like the intent is to create a much broader game than Blood Bowl and Mantic may have the resources and enthusiasm to really run with the content.

Kings of War and Warpath also got their share of attention. Warpath has gone a bit quiet of late, but Ronnie let slip his intent to produce cheap plastic vehicle and plane kits (he thought £12 was about right for a hard plastic tank) and that he wants it to be quick and easy to play with large numbers of models. On the Kings of War front, he made it clear that there are three principal poles in the Mantica world, Good, Evil and Nature. The latter would be represented by druids and elementals. We have already seen the archetypal good army in the planned human Paladins, Battle Sisters and Angels. The plan is also to produce an army of demons which will be more Satanic and Diabolic rather than Chaotic. Though what this will entail remains to be seen. Having covered the main fantasy archetypes (plus Abyssal Dwarves which appear to be a case of trolling Games Workshop for a laugh), Mantic now appear to be moving on to some distinctive and interesting creations of their own.

So not a big day, but an enjoyable one and one plentiful access to the movers and shakers and a refreshing willingness to actually provide us with information.
No comments: