Something of a departure from my usual stuff, here is a scenario I devised for Anima Tactics. I came up with it principally so I could use this model: 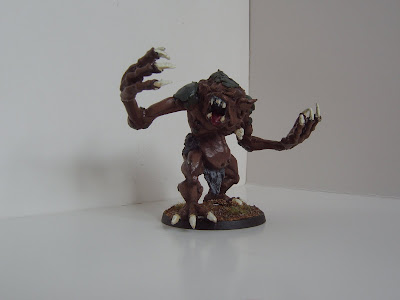 He's a Cave Troll produced by Heresy miniatures and I honestly think he's one of the best fantasy models ever. Though my painting hardly does him justice.

Heresy are a great little company that produce a range of different sci-fi and fantasy models with no particular game in mind (though a number of them will stand in well for models produced by Games Workshop. I bought the Troll simply because I think he's stunning and with no particular plan in mind for what I was going to do with him.

Then this rather mad idea popped into my head. I should warn you that it is intended to be fun and is not particualarly fair or balanced, so try at your peril and don't expect a tournament level game.

The idea is that the Troll throws up an independent problem/ challenge for both players and they will have to figure out how to deal with it if they are going to win.

I came up with this scenario because I really wanted to use the fantastic Heresy cave troll in a game. It is intended to be a bit of fun and is not particular balanced or fair. The troll adds a (hopefully) enjoyable random element to the game and should be tough enough to put players off casually attacking him. If you don't have the Heresy model you can use any model you like to represent the troll, it doesn't even strictly have to be a troll, any decently large monster model will do.

Two parties of characters have discovered a valuable cache of artefacts, treasure and other useful items and both intend to help themselves before the other party. Unfortunately, the cache is the hoard of a large, vicious and bad-tempered Troll. Before they can make off with the treasure the two teams are going to have to find a way to deal with the troll.

Each player selects their force as normal. The two sides are equal but can be of any size agreed by the players.

It is recommended that this scenario is played on an area 48" by 48", though it can be played in larger of smaller tables. An object must be placed in the centre of the table to represent the Troll's hoard. This can be any object that the players choose, but should be no bigger than about 3" across, and no smaller than about 1" across. The hoard is impassable, but does not block line of sight.

Scenery may be set up in any agreed manner. The scenery does not have to follow any particular pattern, but it will look particularly good if the table is made to look like an underground cave, with rock formations, stalagmites and so on. Troll's do not much like sunlight and generally prefer to stay in doors during the day time.

The Troll must be placed within 8" of its hoard. Roll dice to determine which player places the Troll, with the high roller choosing whether to place it or not. The player who does not place the Troll chooses which side of the four table edges to deploy on, with the other player taking the opposite side.

Deploy as normal, alternate placing characters with the player who choose deployment edges going first. Characters may be deployed in an area up to 4" from their edge, and at least 12" from the sides.

The Troll is not affected by the following state effects: Haste, Poison, Doom, Slow, Seal. It can be paralysed, in which case it simply does not activate. It can be given berserker in which case it gains the bonuses to attack and damage, but it's behaviour does not change (it generally charges and attacks the closest enemy model anyway).

If the Troll is eliminated place it on its side. At the start of the recovery phase roll a dice. If you roll an 8, 9 or 0 the Troll recovers to 2 LP and stands back up.

Claw Swipe: The Trolls attacks affect all characters within 2" of it's base.

The Troll is not controlled by a player and does not use action points. It activates once a turn. When it activates and what it does when activated will depend on circumstances.


The Troll has an excellent sense of smell and will react to and attack hidden characters. They still count as hidden if attacked by the troll and cannot be seen and targeted by other players.

Rock Throw. If the troll is targeted by a ranged attack it will pick up a rock and throw it at the character who attacked him. This is a ranged attack with an unlimited range (effectively it has the same range as the attack that triggered it). The troll does not need line of sight and can even target hidden characters with this attack. Rock throw does not count as an activation and the Troll can do it any number of times a turn.

Note. This rule was added to stop players from using ranged attacks to pick off the Troll from a distance. A Wissenschaft party in particular could seriously unbalance the scenario using this tactic.

At the start of the game take a pack of playing cards and take out one king, one queen and one jack for each player, add one joker (so if there are two players there should be two kings, two queens, two jacks and one joker). Shuffle the cards together and place them at the side of the playing area. These cards represent the various items in the troll's hoard.

The player controlling the character draws a playing card from the pile. They may look at it but do not have to show it to any other player. This card is kept with the character and they may only carry one at a time. If they wish to search again they must discard the card they are carrying and remove it from play (not returning to the pile of cards that are being drawn from) before drawing another.

If a character carrying a card is eliminated in close combat the character that eliminated them may to choose to take their card. If they have a card of their own they must discard it. They must decide whether or not to do this before they look at the opposing player's card. If they choose not to take it the card is removed from play (not returned to the pile of cards that are being drawn from).

If a character is eliminated by a ranged attack or another game effect (such as doom) any cards they are carrying must be removed from play.

At the end of the game players received bonus victory points for cards still in the possession of their characters. The amount of victory points is dependent on the type of card:

If you are playing the game with particularly large parties you may consider using two Trolls. This will add an additional challenge and prevent players from simply eliminating the Troll quickly and helping themselves to its treasure 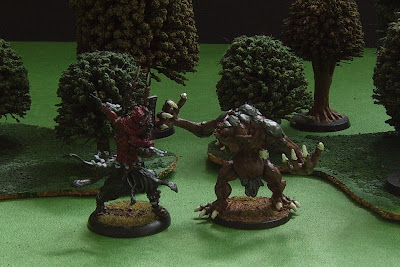 Even the mighty Konosuke has trouble with the Troll

Have a go at the scenario if you like. I have had a crack at myself and will hopefull have a battle report for you soon. Unfortunately when I tried out the scenario a number of my models weren't painted (including the Troll himself!) so I am planning to reshoot the photos I took with painted models. Watch this space.

Quick post to show my newly acquired and painted model of Odin Goldsmith from Anima Tactics. 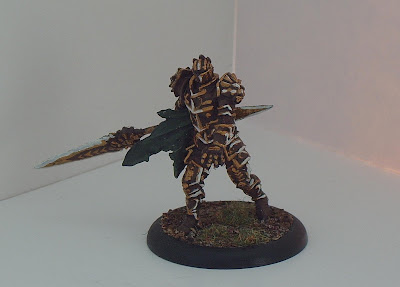 He's another Empire model and the largest Empire model so far, using a large sized base. Pricey too, at £16.99 for a single model. Nevertheless he does look particularly cool and will make a stunning centerpiece for my Empire force, even if his rules don't quite back up the impression (he's only Level 50).