It has been far too long since I did one of these and they have been far too infrequent. Time to rectify that I think. 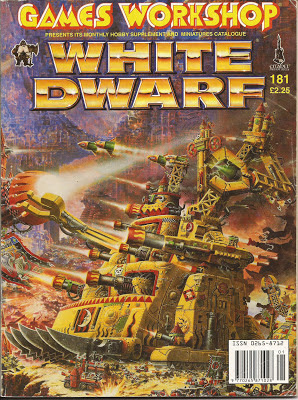 White Dwarf 181 is here and for the first time we have skipped a decade, the 170s brought with them Warhammer Armies Chaos, Warhammer 40,000 Eldar and Orks, Blood Bowl 3rd edition and, just about, Titan Legions.

If White Dwarf 169 was keen to demonstrate that it was now in full colour, White Dwarf 181 takes it to even greater extremes. Even the black and white line art lifted from army books has been a splash of colour while every heading is coloured, bold or bordered and big pictures, mostly of models, but also of studio and WD staff abound. That we are now slap bang in the middle of the infamous "red period" is all too apparent. Taste and subtlety have been tossed out of the window. 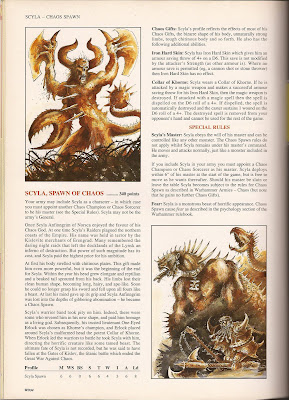 I have written before about how White Dwarf shifted from providing experimental rules and previews to simple re-prints. This is very apparent in 181's Terminator and Sylla articles, lifted directly from the Warhammer 40,000 rules and the Warhammer Armies Chaos book respectively. Unusable without their source rules and valueless with them they have obviously been inserted as cheap promo-material for the new models shown off in big 'Eavy Metal splash pages. 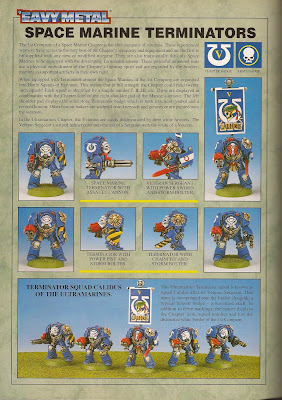 While the shift is clearly evident, it was never quite complete, as revealed in the issues two other rules articles. The first is a traditional preview, this time from the forthcoming Codex Imperial Guard which would not be on sale for six months. In Warhammer 40,000 1st edition Imperial Guard troops had been standardised and quite generic sci-fi troops, despite hailing from a multitude of different planets. In second edition GW started pushing a variety of different looking troops from different planets, even if they did fall into the sci-fi trap of making each planet essentially "planet of the one type of weather". So we got Ice Planet, Jungle Planet, Desert Planet etc. This article is a touch more interesting in that it looks at the Atillan Rough Riders, the slightly incongruous Imperial Guard cavalry regiment. The article present a good mix of rules and background material and is clearly usable with the Imperial Guard army list included in the Warhammer 40,000 box set.

The second article is shorter, but arguably more interesting. Over two pages it presents the rules for Imperial Guard chimeras in Epic. On the face of it fairly trivial, but the significance of these rules is that they were never published anywhere else.

Titan Legions, an update but not a new edition of the 6mm game Epic had just been released (for more about this read here). This months cover is taken from the right side of the box art, the left half having been used on White Dwarf 179 two months earlier.

GW put out a number of new models which had not featured in the new game. The problem was that the Epic army supplements, a series of boxes each of which covered two armies, had already been released and, remarkably anyone with any knowledge of modern GW, they were reluctant to release any new editions. Consequently, the rules for these models appeared in White Dwarf. It may have been the intent to update the supplements at a later date, but this never happened and so White Dwarf remains the only source of 2nd edition Epic rules for a surprising collection of models, including the Chimera, the Imperial Thunderbolt fighter and the Nurgle and Slaanesh Daemon engines.

Titan Legions makes its presence felt in another big way this issue, in the form of a huge tactics article about the enormous plastic Imperator Titan included in the boxed set. The article is quite detailed, but it's hard to shake the feeling that it's essentially a promo-piece. The big picture of two Imperators fighting together certainly feels like encouragement to fork out for a second Titan. 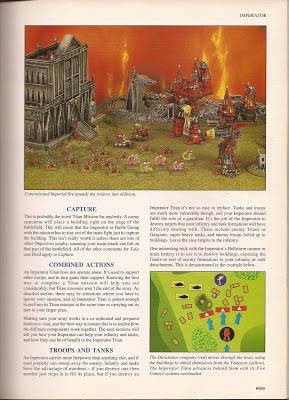 A tactics article also provides this issues Blood Bowl coverage, focusing on Undead teams. Third edition Blood Bowl had been released just under a year earlier, but was suffering the fate of many a GW skirmish game. With the supplement and all the models released, there was precious little to write about. Tactics articles were one of the few ways to maintain interest in a game from which GW had already moved on, even if its players hadn't.

This months battle report is something of a departure. Eight players, divided into two teams take part in an epic scale Warhammer battle in which pretty much all the studios Orcs, Goblins and Chaos Dwarfs take on an alliance of the studios Empire army and Mike McVeys Wood Elves. The battle is an unusually loose affair with no real army lists or points values and some quirky rules such as each player having a model representing them and only being allowed to go and have a quiet word with a member of your own team if you models were in base to base contact. All other communication had to be in the form of notes, representing the sorts of messages that generals really could send to one another. The whole affair seems like a lot of fun and has a refreshing emphasis on having a good time without getting overly caught up in rules and game balance. 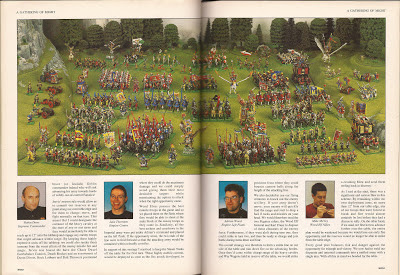 The huge allied armies offer an insight into the state of studio armies at the time. With most studios miniatures being painted for advertising purposes, the armies are a very mixed bag, with odd unit sizes and an emphasis on characters and unusual units. The haphazard release schedule also leads to some odd elements. For example a small unit of third edition Orc Boarboys sit forlornly in the corner because Games Workshop hadn't bothered to update them. And of course Mike McVey's lushly-painted Wood Elves were entirely third edition models, mixed in with a few Marauder miniatures display pieces. The Wood Elf army book was still a year and a half away. It would be sometime before Games Workshop started to produce studio armies that worked as armies and were painted with a uniform look and feel. 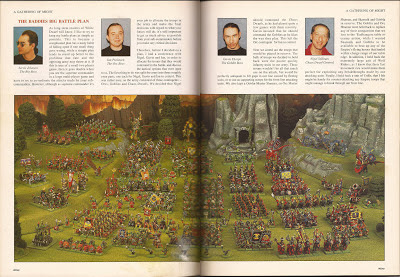 One element that is noticeably absent is any real hobby content. There's no modelling workshops, no conversions on display and no painting articles. 'Eavy Metal has gone from being a show case of well-painted models and tips on how to achieve the same effects, to a display of newly released models, upping the amount of advertorial.

The increased focus on articles that tie-in and, essentially, promote the newest releases makes the issue read more like a promotional tool than a hobby magazine as in the past. Perhaps this is naive and that White Dwarf under GW was never anything more than a promotional tool but it was certainly better hidden two or three years earlier.
1 comment:

A few days ago I was poking around through my old rule books and came across this: 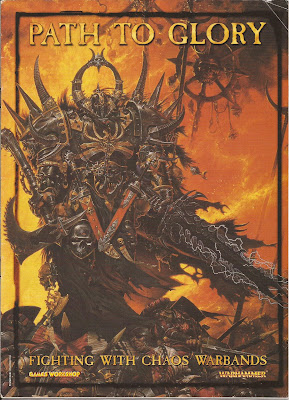 For anyone who doesn't recognise it, Path to Glory is a small booklet sized supplement, given out free with White Dwarf, providing rules for a skirmish level chaos warband based campaign system. Essentially an update of Realms of Chaos for the then current Warhammer 6th edition Hordes of Chaos army book. Like Realms of Chaos, players start with a basic champion and randomly generate his followers and chaos rewards with more of each being generated over the course of the campaign.

When MLB and I started our Realms of Chaos campaign, I had known that I had a copy tucked away somewhere. But it had much smaller and more limited tables for generating chaos attributes and rewards and its follower tables, brought into line with 6th edition models, had none of the glorious craziness of Warhammer 3rd edition (no halflings, giant snails or zoats in these warbands). So I had dismissed it out of hand and not even bothered to look it up.

It seems that may have been a mistake. While I was right about the limited tables, the supplement has a couple of other useful features. For a start it has a list of simple basic scenarios; the ones in Realms of Chaos are sometimes insanely specific. It also has a rather good victory points table. Realms of Chaos' is not very balanced across the champions of the different gods and hands out points for events that hardly ever occur (such as infecting an enemy with Nurgle's rot) and giving out none for things that actually do happen (like killing enemy followers). Also, while the reward tables are quite limited, they do allow champions profiles to improve. Realms of Chaos is odd in that rewards and attributes only rarely modify a champion's profile and often for the worse leading to the odd anomaly that a champion with a dozen rewards can have a worse profile than most of his follower or, for that matter, a much less experienced champion who happens to have started out as a level 25 hero.


The victory points chart is pretty easy to sneak in, its swapping one chart for another and 3rd and 6th edition Warhammer are similar enough that there isn't anything in the new chart that doesn't make sense in a 3rd edition game. The chaos reward chart with profile upgrades is more complicated, but I am already thinking of ways to make it work. But it has raised some issues for me about modifying written game rules.

I wouldn't have called myself a purist about rules, but when it comes to the point I do feel a bit funny about ignoring, updating or changing the Realms of Chaos rules as written. I think it may have something to do with the age of the game. Playing a RoC campaign has been a goal for a numebr of years and by changing the rules it feels like I'm not quite doing that any more. The victory points table is peripheral enough that it doesn't bother me too much, but changing the chaos reward table feels a bit like stepping over a line.

The other issue is with changing the rules of a campaign half way through. I suppose my issue here is that if you can change the rules at will then you may as well not have them or make them up as you go along. If this were a single game I would play to the end with the rules agreed at the start and make changes during the next game. But when playing a campaign you have a choice to continue with rules you don't like, abandon the campaign and start over with new rules or bite the bullet and make changes that may make things work better but will make the campaign feel inconsistent.

I suspect I will suck it up and make my changes, especially to the victory points, which really do suck in RoC. But it does show the difficulty of rules writing and shows why some player prefer to stick rigidly to the rules as written. The alternative is having to think a bit too hard about what you are doing and why.
No comments: