When Games Workshop first announced Shadow War: Armageddon I didn't pay much attention. It seemed like a way to flog their new industrial scenery by throwing together a game using the old Necromunda* rules and some Space Marine Scout and Ork models. Basically a smart use of existing assets, but not of great interest to me as a I already owned Necromunda first edition. 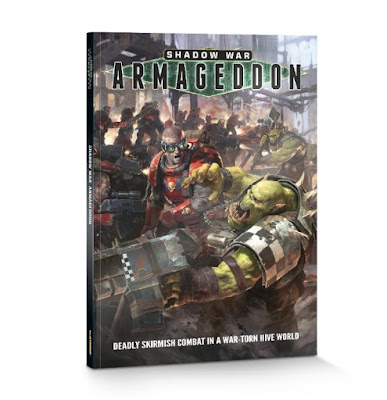 Games Workshop also didn't seem to expect much from it as they made it limited edition and let it sell out in about five minutes. They clearly underestimated the interest in their old games as this lead to a huge fuss online. To their credit, and uncharacteristically, GW responded to the complaints and released a paperback version of the rulebook on its own. In addition to the rules from the game, this also included the rules for additional Kill-Teams based on other armies that they had published online and a couple of new ones.

It was at this point I started to take an interest as I realised that I could put together about six gangs without having to buy a single model and, in one case, without even having to paint a single model. And, even better, I would be able to use some lovely old models that had been sitting around neglected.

Having finished my Beyond the Gates of Antares project and finished my Dwarf buildings, now seems like a good time for a Shadow War project. It's a bit of contrast to my last two projects, in that its based on small teams of models, which means lots of variety and that I can afford to take a bit more time over the individual models.

It's also likely to go slightly differently than my last two projects. For Warhammer Siege and BTGOA I basically painted enough models to play a game, played it, painted some more and so on. I'll probably start that way with Shadow War. I'll paint two Kill-Teams, play a game, paint two more and so on. But once I have six teams painted, I'll be more or less done with painting, barring a few new recruits that I might add to the Kill Teams as the campaign progresses.

On the other hand, the campaign is likely to last longer than three games, quite a bit longer. To actually win a campaign in Shadow War, a Kill-Team is supposed to collect 15 Promethium caches and then win one more game. The rules give the winner of each game D3 caches and the loser 1, play some scenarios give you the opportunity to win one more. This means that to win a campaign, a Kill-Team needs to play a minimum of 5 games (4 to collect the caches, if they are very lucky, plus one more win). And I have six Kill-Teams. Depending on how things go, I may reduce the number required to win, but I'm still likely to be playing games long after my models are all painted.

But, this gives me an opportunity. With the campaign still going on, I can turn my attention to a new painting project, probably an army-sized one that would require me to paint a lot of models before I can do any gaming. I haven't decided what that will be yet, but I have plenty of options.

In the meantime, here are my first two Kill Teams. The first are Sisters of Battle from the Order of the Argent Shroud. I've had Sisters of Battle sitting around for years unpainted and recently picked up some more because I thought (completely wrongly) that Games Workshop might be about to retire them. I painted them in the Argent Shroud colours because I knew I could do a decent and quick job using Army Painter plate metal spray as a base, having used the same trick for my Concord and Chaos Dwarfs 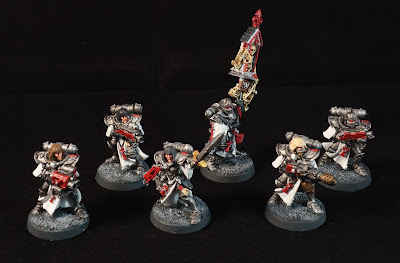 My second Kill-Team is the one I didn't have to paint. I've had my Death Guard Chaos Marines for years and haven't used them since Warhammer 40,000 4th edition, so this was a good chance to get them out and give them another chance. I painted them in double quick time for a campaign, mostly by dry-brushing grey over brown which gave them a slightly dusty look which I think works okay for Nurgle Marines. I think the painting stands up okay, though the champion's face looks a bit basic and I may at least try painting his eyes. My biggest regret is my choice of yellow-brown as a contrasting colour makes them look a bit purple even though they were only painted in grey.

More soon as the campaign gets under way.

*According to one reviewer who owns a copy of the second edition Necromunda rule book, it actually replicates them perfectly, right down to the layout as though they just did a bulk find and replace on the word "gang" and "gangers" and swapped out the design template.
No comments: