Chariots of Fire (and Brimstone)

When I started this blog it was certainly not my intention to see it dominated by one army or game quite as much as it has been, but since I have started painting my Chaos Army I have found it quite hard to stop. I have Anima Tactics models piling up and my Red Devils still have no opponents.

Sadly real life has been getting in the way of my painting lately and so I don't have as much to show off as I would like. Still here's a couple of new models that have been sitting around unpainted for years. 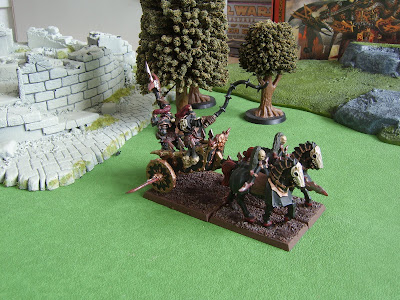 I wanted a chariot for my army since 4th edition Warhammer, but the only model dated back to 3rd edition had to be mail ordered and looked pretty terrible. So when a new model appeared during fifth edition I snapped it up.

This model was assembled and painted pretty much as is, but I added a large monster base for the Chariot, it being released long before the advent of Games Workshop Chariot bases. The base really helps the model to feel like a coherent unit somehow. 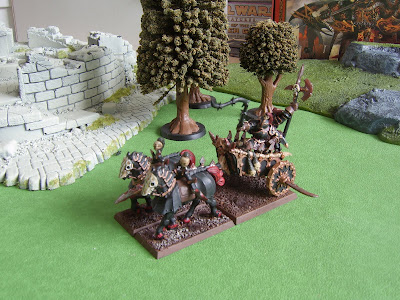 The same Chariot from the other side. 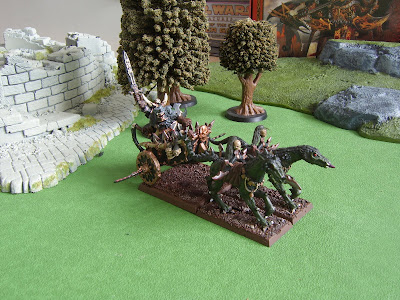 This Chariot has had a few modifications, it's steeds and crew being swapped for different models

The steeds are actually from the long dead Games Workshop game of desert-based mobile Ork combat, Gorkamorka. The Gorkamorka expansion introduced a race of mutants who rode around on lizard like beasts. These steeds are two of the beasts.

Games Workshop's old sales pattern was to release a game, flog it for all it was worth and then get rid of it in a big sale before releasing a new game. If you were wise to this pattern you could get yourself a huge amount of material for a very low price. I did brilliantly out of the Blood Bowl mega sale and acquired about five teams.

These two beasts were bought for a pound each on the basis that they looked interesting and I might use them some day. I finally decided to add them to my second chariot to make it stand out a bit from the other. 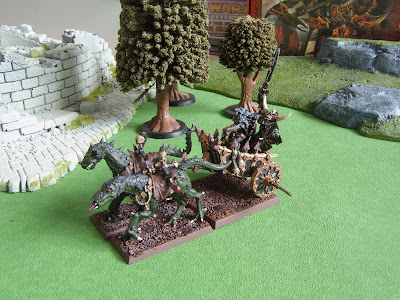 The driver was a product of a much earlier GW sale. He is actually an old Marauder miniatures Chaos Hound handler. Marauder miniatures was an odd semi-autonomous spin off from Citadel back in the early to mid 1990s. At the time it was the only part of the company producing new Warhammer models and they were a great deal better than Citadels offerings of the same period.

The Handler came in a pack with two chaos hounds and I bought three packs for a pound each in the first great Games Workshop sale (around 1994 or 1995, I'm not sure). The hounds served me faithfully as part of my Chaos Army for years, before being superseded by the new plastics. The handler now lives on as a chariot driver as he fulfilled the crucial criteria of having his own whip.

The Champion is an old metal Chaos Warrior I bought during fifth edition to lead my Marauder unit, Marauder Champions were Chaos Warriors back then. He has been kitted out with a new plastic Chaos Warrior shield and now usually plays the role of an Exalted Hero in a Chariot.