There has been a lot of discussion, much of it highly critical, about Games Workshop's new game, Dreadfleet. The bulk of the criticism seems to have been focused on the extent to which the game is dominated by random factors, leaving the outcome of the game too dependent on the roll of a dice. I don't want to get into the Dreadfleet debate at the moment as I haven't played it yet, but the discussion did get me thinking about randomness in gaming.

There currently exists a theoretical dividing line between looser, friendlier, 'beer and pretzels' rules and more competitive games. The latter being considered a genuine contest of skill with rigorous rules and less scope for randomness to play a part. The odd thing is, that if you want to design a contest of skill you probably couldn't find a worse field of human endeavor to base it on than warfare.

Lets take a look at one significant example, the Battle of Sekigahara, the largest Samurai battle in history which saw over 160,000 men take the field. On one side was Tokugawa Ieyasu, future founder of the Tokugawa Shogunate that would rule Japan for 200 years. On the other, Ishida Mitsunari, loyal defender of the Toyetomi family, that of the Toyetomi Hideyoshi previous ruler of Japan, Toyetomi Hideyoshi and his young son Hideyori. At stake, nothing less than the future of the country.

Despite the stakes and the historical impact that echoed down the centuries to this day (For example, Tokyo only became the capital of Japan because of this battle) very little hinged on military tactics on the the day. Mitsunari had the slightly stronger position on the high ground, but what swung the battle in Ieyasu's favour was that a good proportion of Mitsunari's army refused to move when ordered or actively switched sides. A lot of this had to do with Mitsunari's personality, he was disliked and distrusted by his own side and had insulted several high ranking supporters, and much due to Ieyasu's political maneuvering before hand, but in the end the battle was decided by events outside of the field.

The point illustrated by this battle, is that so much of the outcome on the day is beyond the General's control, at least once they take to the field. Sekigahara is a nightmare to recreate as a wargame because the betrayals either have to be predictable, in which case the Mitsunari player is at a disadvantage but is able to plan for the betrayals in a way that the historical Mitsunari could not, or the betrayals are determined randomly, in which case the outcome is largely out of the control of the players. Sekigahara is a particularly good example of the outcome of a battle being determined by chance, but it is scarcely unique.

A while back, I read a post on a message board in which a gamer complained about the the command and control rules in Black Powder. The crux of the complaint was that real General's don't roll dice to determine if their orders will be carried out. The point missed was that these rules simulate, in an abstract way, the extent to which a general's orders can be lost, misunderstood or simply not followed. There are abundant examples. The Charge of the Light Brigade is probably the most famous example of orders being misinterpreted. Another, less well known example is Agincourt. Although remembered as the famous defeat of the flower of French chivalry by English Archers, what is less well known is that the French general could see it coming. Unfortunately for him, as he had born a commoner elevated to his rank by skill rather than birth, his orders were largely ignored by his Knights.

In the end the outcome of many battles is down to luck, by which I mean the chance collision of uncontrollable factors. To be a good simulation of warfare, a good wargame needs to reflect this. This applies to command and control, but also to troop performance. When committing his forces the general should know that unit x will defeat unit y 9 times out of 10, but also that unit y will be triumphant 1 in 10 times and, crucially, have no way of knowing if this is one of those times. Good generalship is often about gambling with the most favourable odds, not certainties.

It is worth remembering that real generals didn't do this for fun or as an attempt simply to prove their tactical skill. Mitsunari and Ieyasu were in contest for control of Japan. Sekigahara was about contesting the forces they could marshall. There was no use afterwards complaining that the rules were unfair.

Of course, making a wargame a realistic simulation of warfare is not the same thing as making it a good game. This is why some famous historical battles are better to wargame than others. It is also why most wargames tend to allow both players roughly equal forces or skew the victory conditions to make it a contest of skill. Historical Generals didn't fight for fun and wargamers don't play to contest the fate of nations. If Dreadfleet is a terrible game (and I mean if) then arguing that its realistic is no defence.

However, it is still worth considering that adding random elements to a wargame may make it more realistic, rather than less.
No comments:

The front cover of White Dwarf 145 comes as something of a shock, the main logo has been displaced to make way for the logos of HeroQuest and Space Crusade. I have written about HeroQuest before and Space Crusade was its Warhammer 40,000 inspired equivalent, in which players took control of squads of Space Marines battling Orks. Chaos Space Marines and Chaos Androids (the fore-runners of the Necrons). This was White Dwarf's second special issue dedicated to these more mainstream board games (the first being 134). It seems like a smart piece of marketing. The prominent logos could entice younger fans of the game while existing Games Workshop players could expand the games with a wider range of miniatures. 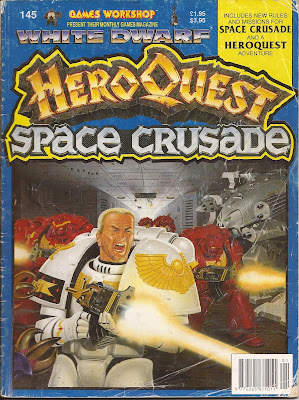 The Space Crusade article is particular elaborate, featuring a five part campaign with rules for Genestealer Hybrids, Terminators and Librarians. Given that Space Crusade had no system for psychic powers, the inclusion of psychic power cards for all the marine players, albeit ones you have to cut out or photocopy, is particularly ambitious. On the down-side, to make full use of the rules you are going to need a lot of models. One mission requires you to replace all the Orks with Genestealer Hybrids. With that in mind, its hard to see who this is aimed. Younger players would have to buy a lot of new models to play the missions, while the only players likely to have the required miniatures already would probably have a copy of Space Hulk and play that instead.

The HeroQuest article is rather better in my view. It consists of a two part quest called the Eyes of Chaos. It is illustrated with some imposing pictures of metal Games Workshop Ogres, but was released hot on the heels of the HeroQuest expansion 'Against the Ogre Horde' which featured seven plastic Ogres, so plenty of existing players would have the necessary models. The only truly new character is a Bretonnian Knight on foot, not a particularly challenging character to proxy. In fact I gave the Eyes of Chaos a go at the time of its release, but never player the Space Crusade rules at all. 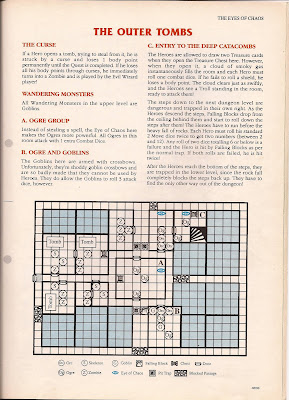 The Eyes of Chaos for HeroQuest
In a clever piece of synergy, the issue also contains a version of Eyes of Chaos for Advanced HeroQuest, Games Workshops more complex HeroQuest spin off. The latter may not have offered the straight forward fun of HeroQuest, but had a number of enjoyable features, including its random dungeon generator tables, and was well supported in White Dwarf. 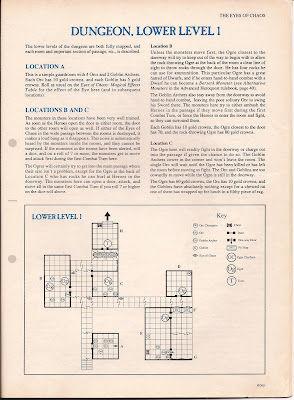 and again for Advanced HeroQuest
Moving on from the HeroQuest and Space Crusade material, the issue also features an article on Dragon Masters. This was a slightly odd game, written by Ian Livingstone one of Games Workshop's co-founders who ultimately went on to found video games company Eidos. He had long since left Games Workshop by the time the game was released and it feels like a product of a much earlier time in the companies history.

A self contained board game in which players took on the roles of rival High Elf lords sending out armies to explore a map board, it had the rather interesting mechanic of counters that were placed in each space face down and flipped over when an army entered the space to show what they encountered. This article provides a series of new counters to expand the game. A nice stand alone expansion that sadly has the drawback that, in a time before downloads and scanners, the new counters would have stood out a mile next to the professional printed counter-parts from the main game. 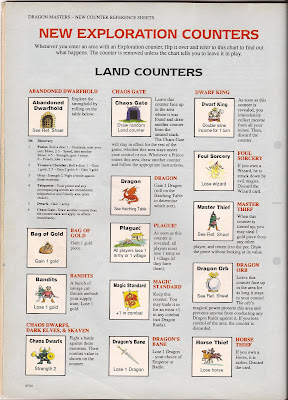 New Counter rules for Dragon Master
The final article is a new army list for Tyranids in Warhammer 40,000. It says something about the way Games Workshop has developed as a marketing machine that this article is weirdly low key, almost an after-thought.

It does feature an intriguing new idea. The whole list is printed on cards, or rather on paper intended to be cut out or photo-copied and used as cards, with background and images on one side and rules on the other. I suspect this idea was inspired by the recently release 2nd edition Epic which also used card-based army selection to good effect. It certainly pre-dates the modern fad for card-supported miniature rules and it is intriguing to imagine a world with army card decks instead of books. They would have been easier to refer to mid game, if trickier to read and store, and also would have allowed the seemless introduction of new units. Sadly this was not to be and the idea was never used again. Army Cards - an idea that never caught on
The army list itself is a bit of a hodge-podge seemingly put together from existing models with as few totally new elements as possible. Some elements will be familiar to modern players, even if the models have changed, Tyranid Warriors, Genestealers, Termagents and Carnifex (the last two called Hunter-slayers and Screamer-Killers). Also present are Genestealer Hybrids, brood brothers, the Patriarch and the Magus. In fact, there is enough Genestealer elements here to comfortably put together a Genestealer cult army without recourse to Tyranid specific elements at all. Then there is the rather odd inclusion of Squig hordes which are apparently Tyranid-modified Orks, Zoats, effectively armadillo centaurs imported from Warhammer 3rd edition, and Mind Slaves, really an excuse to import chaos space marines and others into the list.

So ultimately, a decidedly bitty army list and one that doesn't seem to have much of a coherent plan behind it, except, perhaps, to put together an army with as little recourse to new models as possible.

This was an unusual and slightly special issue, but we still haven't moved very far from the format of White Dwarf we have seen so far. The bulk of the magazine, and all the key articles, are new, experimental rules for a variety of games. Much of the magazine is black and white with a few colour pages only. However, although not readily apparent from this issue, Games Workshop was starting to change in a way that would seriously impact White Dwarf as we will begin to see from the next issue in our tour.
No comments: