It has been a while since the last update on my 28mm Samurai for Ronin project, but I have not been idle. Since my last post I have finished my first 100 points of two new Buntai.

The first is a second Bushi buntai. This time a very small, elite team. 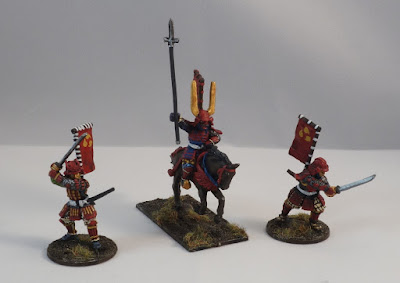 The Bushi faction restricts the models you can choose pretty heavily. Combined with the high points cost of the models, most 100 point Bushi buntai are likely to be more or less the same. You will have no more than five models, of which only one can be a Samurai. The rest will all be Ashigaru and, although you have some choice of weapons, no more than one can have a teppo (musket) and no more than half can have missile weapons.

There is an alternative option, however, and that is to choose only models of rank 3 or higher which means Samurai and above. With that in mind, my second Bushi buntai is made up of only two Samurai and one Hatamoto* on a warhorse. 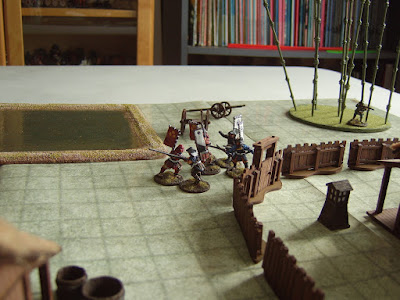 A confrontation between the Ii and Shimazu clans

Technically, this buntai is against the rules as the "what you will need" section at the start of the rulebook says you need 4 - 20 models per side. But I'm not sure this can be considered a hard and fast rule. The same section says you need counters, but if you chose to right down wounds and status changes on a piece of paper it couldn't really be called cheating. In any case, I plan to expand the buntai when I get the chance.

The Samurai are painted red in the style of the Red Devils of Ii Naomasa, who long term readers may remember were the basis for my 6mm Samurai army. The Red Devils are always a popular choice because they were one of the only clans to have anything close to a uniform colour scheme. Ii Naomasa himself was shot by a Shimazu clan sniper at the battle of Sekigahara, so they fit quite nicely with my first bushi buntai.

My third buntai are the Sohei, or Warrior Monks. 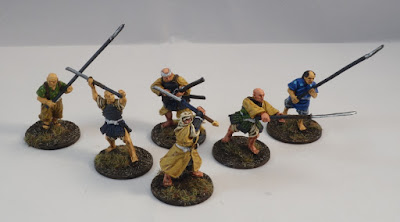 The Sohei are pretty good match for the Bushi. Their combat pool and fight values are about the same as the equivalent rank bushi and they have a similar array of weapons. They're more lightly armoured, but trade that for being fearless, which means they can ignore morale checks. They also include some rank 0 models, in the form of the two temple attendants armed with yari (spears). These guys are little more than speed bumps, but only cost eight points each, less than half the cost of the cheapest bushi model.

The models are all from Perry miniatures. I am using the bare-headed monks as Initiates and the one with a covered head as a full Sohei. I have no idea if this has any basis in history, but it's an easy way to tell the apart.

Most of the Monks are equipped with the fearsome naginata, one of those ambiguous weapons that sits somewhere between a pole-arm and a sword. Basically, if a pole-arm has a longer handle than blade and a sword a longer blade than handle, the naginata, like the Dacian falx, sits in between with a blade almost the exact length of the handle. In game terms, the naginata boosts damage (but not as much as a two-handed sword) and initiative (but not as much as a spear) and so is a good compromise weapon. 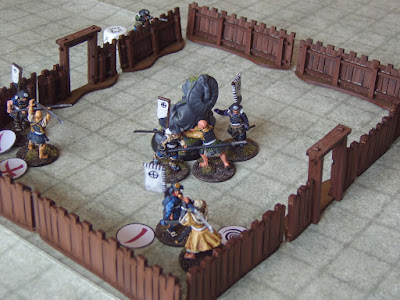 This picture is from a recent test battle between the Shimazu bushi and the Sohei. The battle was an absolute flat draw, which shows how good a match the two sides are.

More picture as soon as possible.

*Hatamoto, meaning "men under the banner" where the retainers of a senior Samurai or Daimyo (Warlord). Ronin appears to be using the term to designate an elite Samurai, as they are the lowest rank that can ride a horse.
No comments:

Two weeks have passed since the UK Games Expo in Birmingham, but life has a way of interfering with blog posts, so my comments have had to wait.

This was my third Expo and and each one has been a markedly different experience. Not because the show itself has changed a great deal, but because it is broad enough to encompass a range of activities and one persons Expo can be different from another's depending on their interests.

I spent Expo 2013 bouncing from demo game to demo game, squeezing in giant-sized games of Castle Panic and Ticket to Ride along the way. At my second Expo I squeezed in visits to the dealer room around seminars and an RPG session, while this year I took part in my first wargaming tournament.

I decided to have a go at the Bushido tournament because I had never done anything like it before, because I already had plenty of painted models and because they were offering a 20% discount to anyone who took part. In the end I did spectacularly badly, though my opponents were unfailingly courteous and sportsmanlike, at least in part because I chose my warband based on the models I like best and had painted most effectively. The experience cemented my belief that I am not a very competitive player, plus eight hours of one game in a day is two to four hours more than I want. But it was a new experience and now I can now say I don't much like tournaments based on experience. 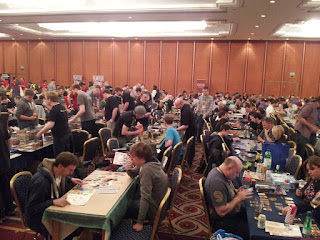 I have seen the Expo described as basically a board-gaming convention, but in reality it seems to be several different conventions sharing a space. As well as the wargames tournaments, there are board game and card game tournaments, RPG sessions, seminars and a few quirky oddities like LARPing and cosplay. The dealer rooms cover everything from board games to goth fashion. The whole thing demonstrates the extent to which geek interests tend to overlap and it is quite possible to have an enjoyable experience while ignoring more than half the convention.

It is unusual for me in that is the only event I regularly attend for which I stay more than a day and which takes place at a hotel.This gives the experience something of a community feel as groups of gamers hang around the bar into the evenings or compare notes over breakfast. 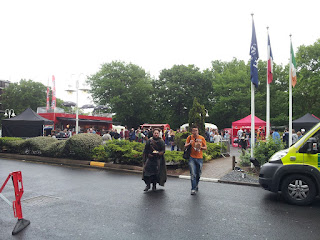 Next year though the character of the event is genuinely set to change as large parts of the event move out of the hotel and colonise parts of the neighbouring National Exhibition Centre. This is largely for reasons of space, the hotel having become increasingly jammed. This lead to rooming problems for several events and I found myself involved in a kind of tournament musical chairs as the Bushido tournament was bounced from one room to another a total of five times. It could have been worse, in 2014 an air conditioning failure resulted in a far warmer atmosphere than was comfortable.

It will be interesting to see what effect dividing the event has. Will there be a division between the tournament players and the casual gamers as one set are left in the hotel and the others troupe across to an exhibition hall? Will the sense of community be lost if there is a division between the event and the accommodation? And will the breakfast queue be even longer as everyone gets up even earlier because they have to walk further?

If nothing else, the UK Games Expo has provided a different experience each time I have attended and that, compared to the predictability of so many gaming shows, is very welcome.
No comments: