It has been far too long since I wrote one of these (actually it's been even longer than that, given that I started this post and then abandoned it in order to start again). To be honest, the principle reason I have been avoiding them is that I have to go and scan a bunch of pages for pictures which drags out the publishing time of the posts.

But with White Dwarf monthly now officially dead as a concept, it feels like the right time to pursue this with an increased sense of vigour. While my collection doesn't extend to the end of the monthly magazine, I have dipped in and out frequently enough that I can pull together a representative sample of most eras of the magazine, even if I have to abandon the strictly once a year rule. And with the magazine at an end, so to do these entries. 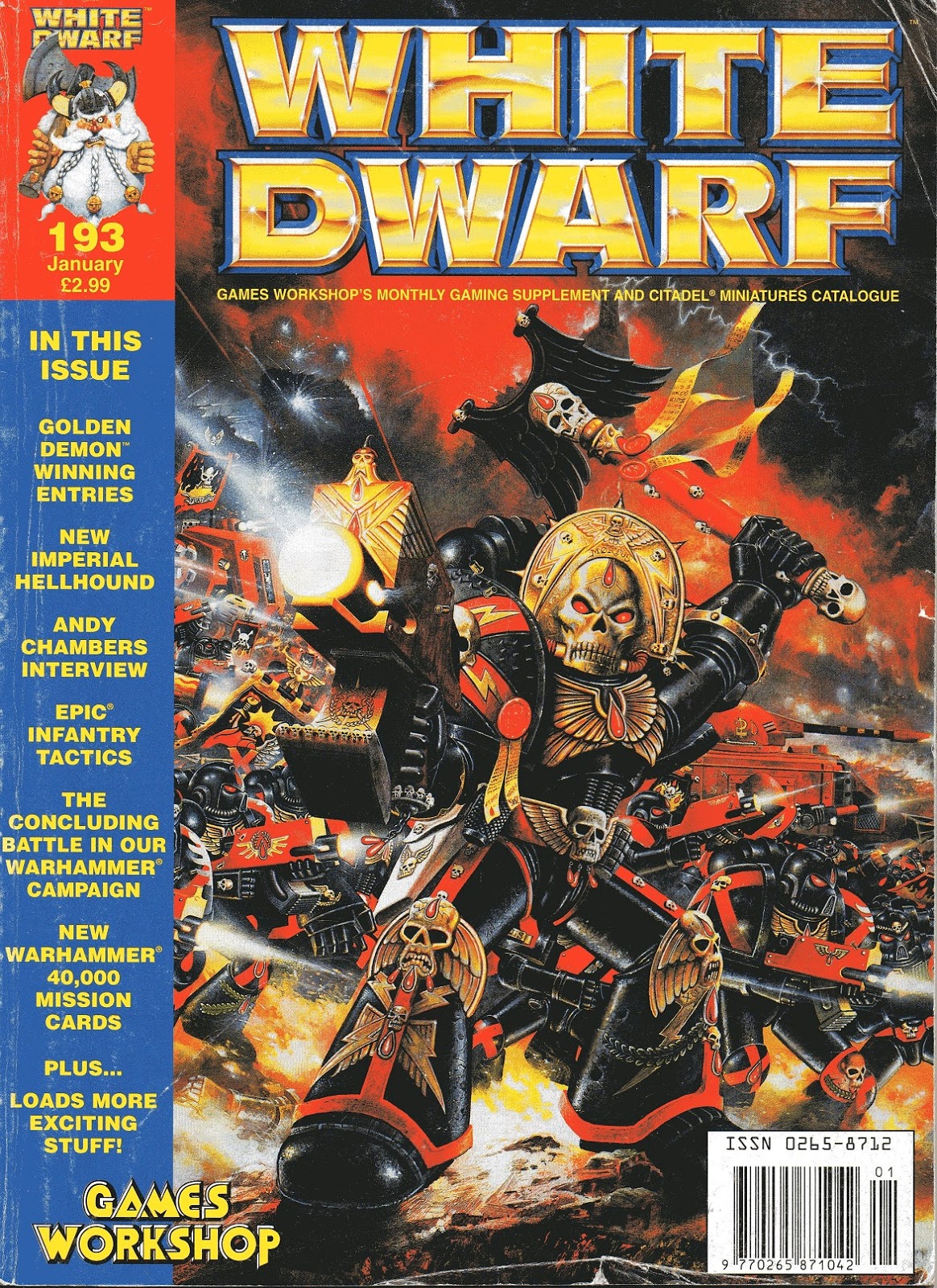 The cover comes from Codex Angels of Death, which covered the Dark Angels and Blood Angels, neither of whom are featured prominently in this issue

To business and White Dwarf 193. We have reached a turning point in that this issue represents the first, and nearly the last, time that the magazine has consciously been re-designed.  White Dwarf has absolutely changed over time, 181 looked nothing like 121, but this is the first time someone has consciously said "That thing we used to do? We're not doing it anymore, we're doing something else." This happened with White Dwarf 191, the second issue to be edited by Jake Thornton.

On the surface the really big changes amount to an increased page count and the introduction of two pages of card pull outs. The latter felt hugely valuable at the time, given how much of Games Workshops games were delivered in the form of cards of one sort or another, from board sections, to magic item cards, to vehicle datafaxes, to army cards, to counters, to wargear cards and on and on. So including a card section was adding a lot of value to the magazine. Of which more later.

Beyond the immediate, not much else appears to have changed. Visually, the magazine is much the same as White Dwarf 181 but turned up to 11. This is exemplified by the replacement of the venerable old White Dwarf logo with a bigger, more angry and cartoony version by Wayne England. Inside, the "red period" is still in full swing with everything painted in bright bold colours. Articles have huge, colour headings, expansive box outs and side bars (one article, on Warhammer 40,000 missions is more side-boxes than article) and huge coloured borders either side of the page into which content occasionally intrudes. 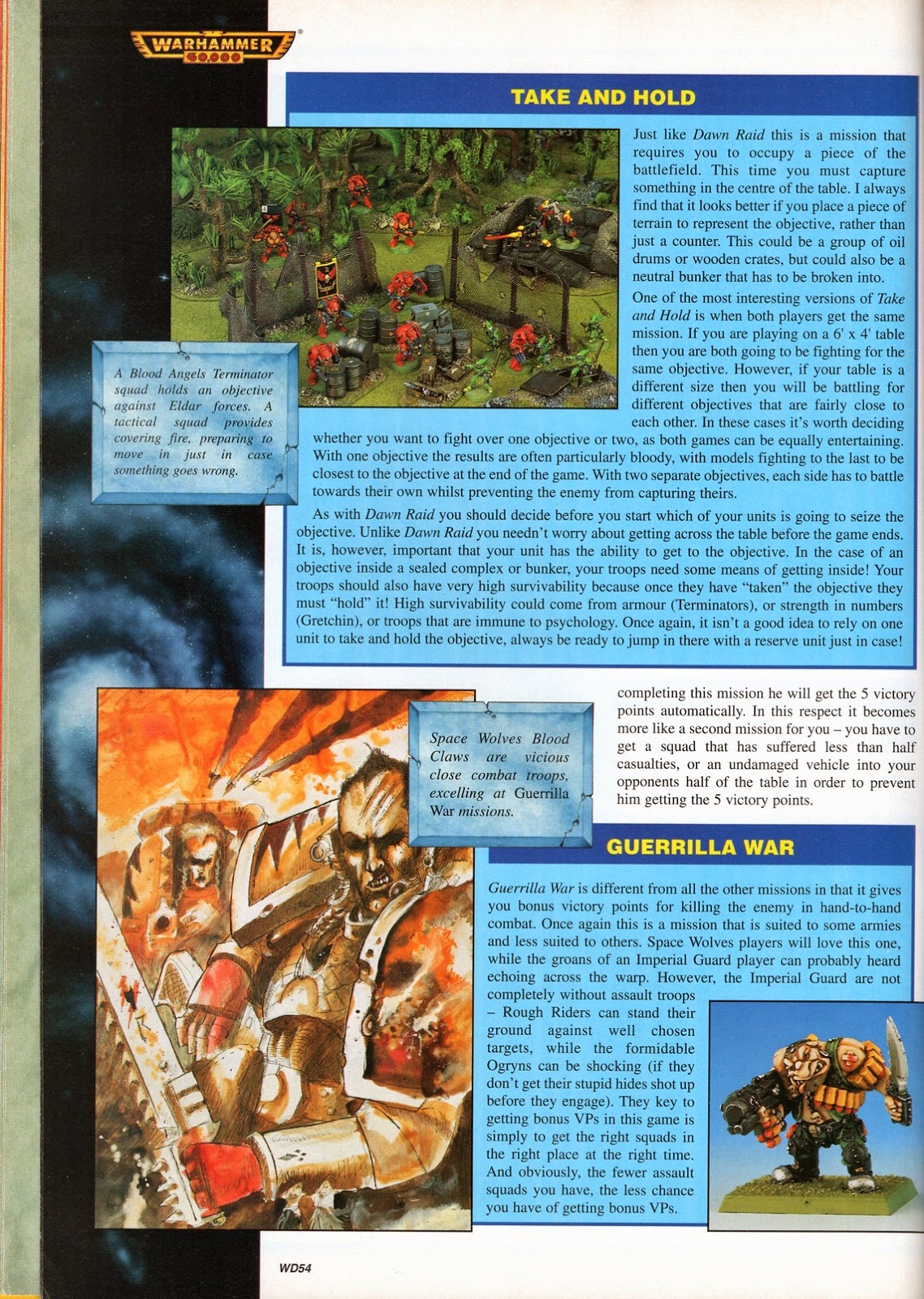 How much of this is article and how much is sidebar?

So not so much a reinvention or redesign as the same thing further emphasised? Not quite, because if you take an even closer look, there is something else going on below the surface here. But to understand what that is, we have to go back to the start of our journey.

I have written about this before, but back when White Dwarf 121 was published, Games Workshop was chronically inept at the business of producing and distributing rules. They weren't necessarily bad at writing them but there was very little sense of what they were for or how to deliver them to customers. This is why Warhammer and Warhammer 40,000 were published as books and everything else as boxed games; why Warhammer had a single slim volume of army lists and Warhammer 40,000 was divided into an odd mix of articles of White Dwarf compendiums; why the Space Marines shared a book with the Imperial Guard and Squats while Chaos and Orks got two thick hard back volumes each. It was a glorious mess and one from which White Dwarf benefited hugely.

White Dwarf 121 contained preview material from Realms of Chaos months before its release, alongside articles for Space Hulk and Advanced Hero Quest that had no planned home in any supplement at all. Add to that a painting guide and showcase that essentially looks at whatever the 'Eavy Metal team felt like working on without any reference to the rest of the magazine content. What's left is an Ork preview, that looks like news, but acts as an introduction to over a years worth of Ork material that would eventually, after much re-editing, find its way into the huge Ork rule books. Its probable that the books only got that big because the designers kept churning out more content.

So what we had was a design studio that seemingly did whatever it felt like, without any sense of how it would be published, and a White Dwarf magazine that simply helped itself to whatever it liked, because there wasn't anywhere better to put it. We end up with magazine articles that look like rule book extracts and rule books full of magazine articles because no-one is clear on what anything is for. Meanwhile, only a small part of White Dwarf actually consists of the sort of content you might find in a conventional magazine.

By White Dwarf 193 this has changed. Games Workshop finally has a definitive model for publishing rules, albeit one with a few rough edges. Release a large boxed game, then a supplement that covers all the bits you couldn't fit in the main game plus some cards. Some lucky games get more than one. For most games, this is enough. For Warhammer and Warhammer 40,000, each army gets its own book which includes all the rules needed to play that army plus an army list. This model makes it far easier to get what you need to actually play the game, albeit at a cost, so that you can focus on actually building an army.

The downside of this for White Dwarf is much of its content dries up. Even then, it takes some time before this is accepted. Consequently the rules articles continue, although now they're re-printing content from recently or soon to be released supplements. The process is gradual, so White Dwarf 157 can still fill up half its pages with a preview army list for the Space Wolves, even while re-printing the Grand Theogonist rules for Warhammer. And the studio occasionally throw them a bone, such as the Chaos Dwarf rules, as no-one is planning to give them a proper book at this point.

Along the way, they also figure out tactics articles and battle reports are a good way of generating content that doesn't belong in a rule book most of the time. But the effects are still patchy.

What we start to see from White Dwarf 191 onwards, is a conscious attempt to restructure White Dwarf as an entity in its own right, and not just a dumping ground for leftover studio material. As a consequence, we start to see material that feels more consciously "magaziney" for want of a better term. The first big thing is the introduction of interviews, some with key members of the GW studio, such as Andy Chambers in this issue, others with "celebrity" gamers or people who have produced nicely painted models or armies. None of these are particularly in depth, but they do provide the kind of behind-the-scenes information that a magazine for GW fans, as opposed to a rules dump, should provide. 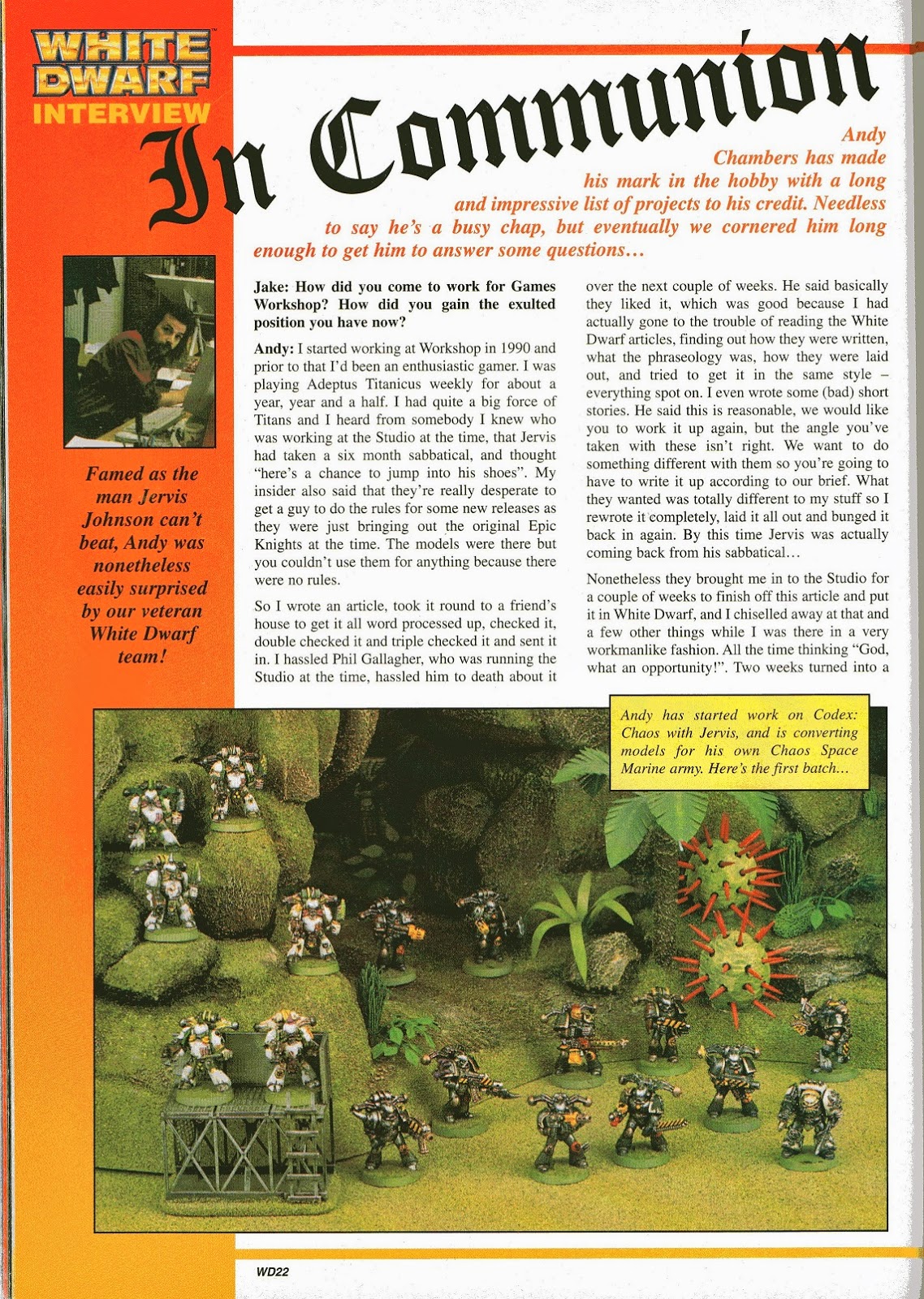 Now we do interviews

Other subtler changes take place. There is a visible shift towards trying to provide genuinely useful content. The 'Eavy Metal article in this issue takes the form of a response to questions, there is a new modelling workshop article on game boards and we get semi-regular rules FAQ article. The article on the newly-released Imperial Guard Hellhound becomes part rules re-print and part tactics article, giving the magazine some added value. This issue battle report is a follow on from an article in the previous issue, which presented a linked campaign of Warhammer scenarios setting Orcs against Dark Elves, with instructions on how to build Orc huts. The battle report puts the final scenario to the test. The end result is a neat thematic link that demonstrates that article ideas can be put to practical use. 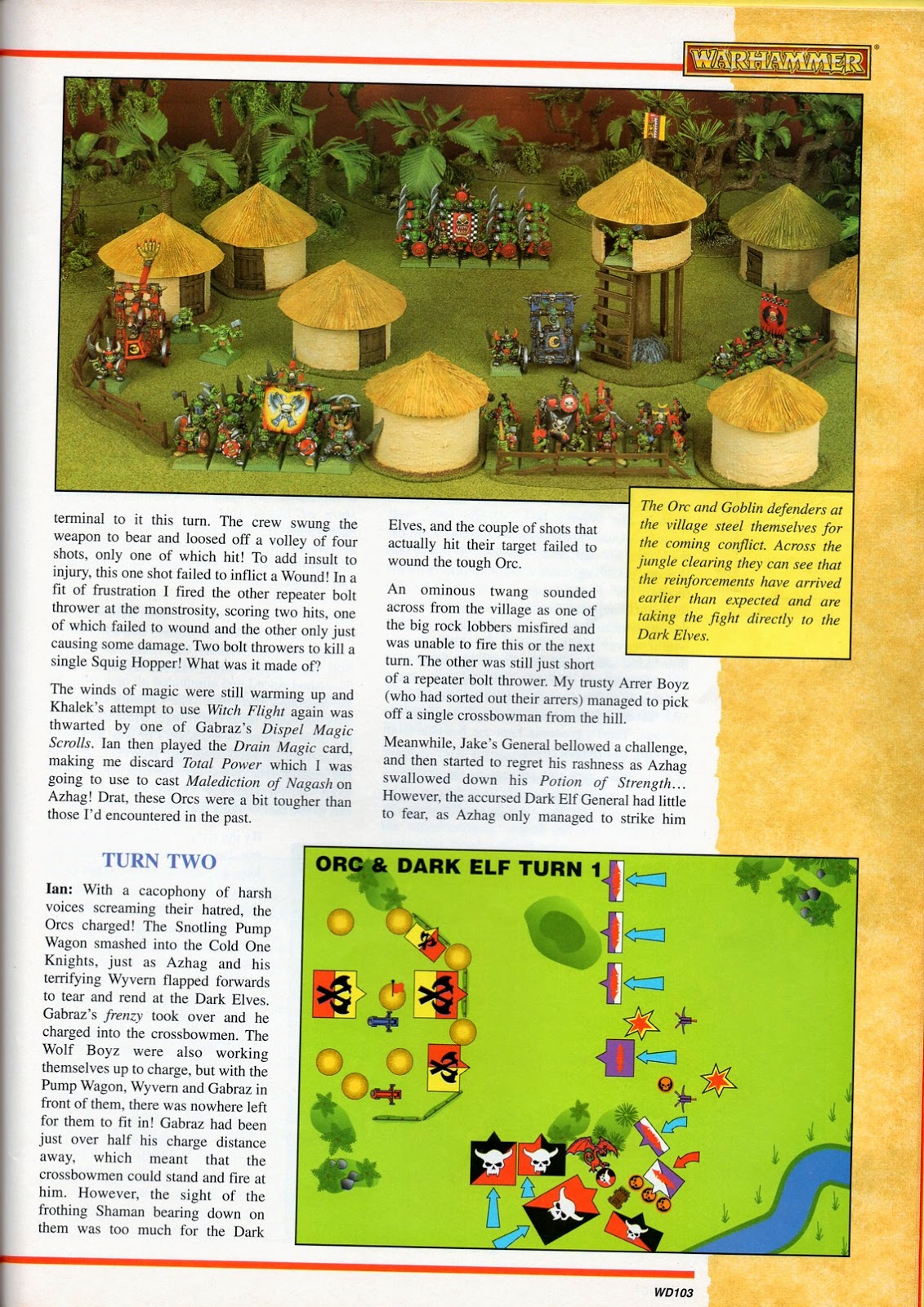 The battle report shows off Orc huts made from Pringles tubes

The other way way in which White Dwarf tries to carve out an identity for itself is by creating a distinction between the White Dwarf team and the studio team. The WD team are introduced in photographs on the opening page for the first time. These photos are repeated by each article to reinforce a sense of authorship. Members of the team interview studio staff, which has the effect of placing the WD team slightly outside the GW structure and bringing them closer to the reader. Prominent GW staff, Andy Chambers, Jervis Johnson and Nigel Stillman are given semi-regular columns with names that highlight their "guest" status. 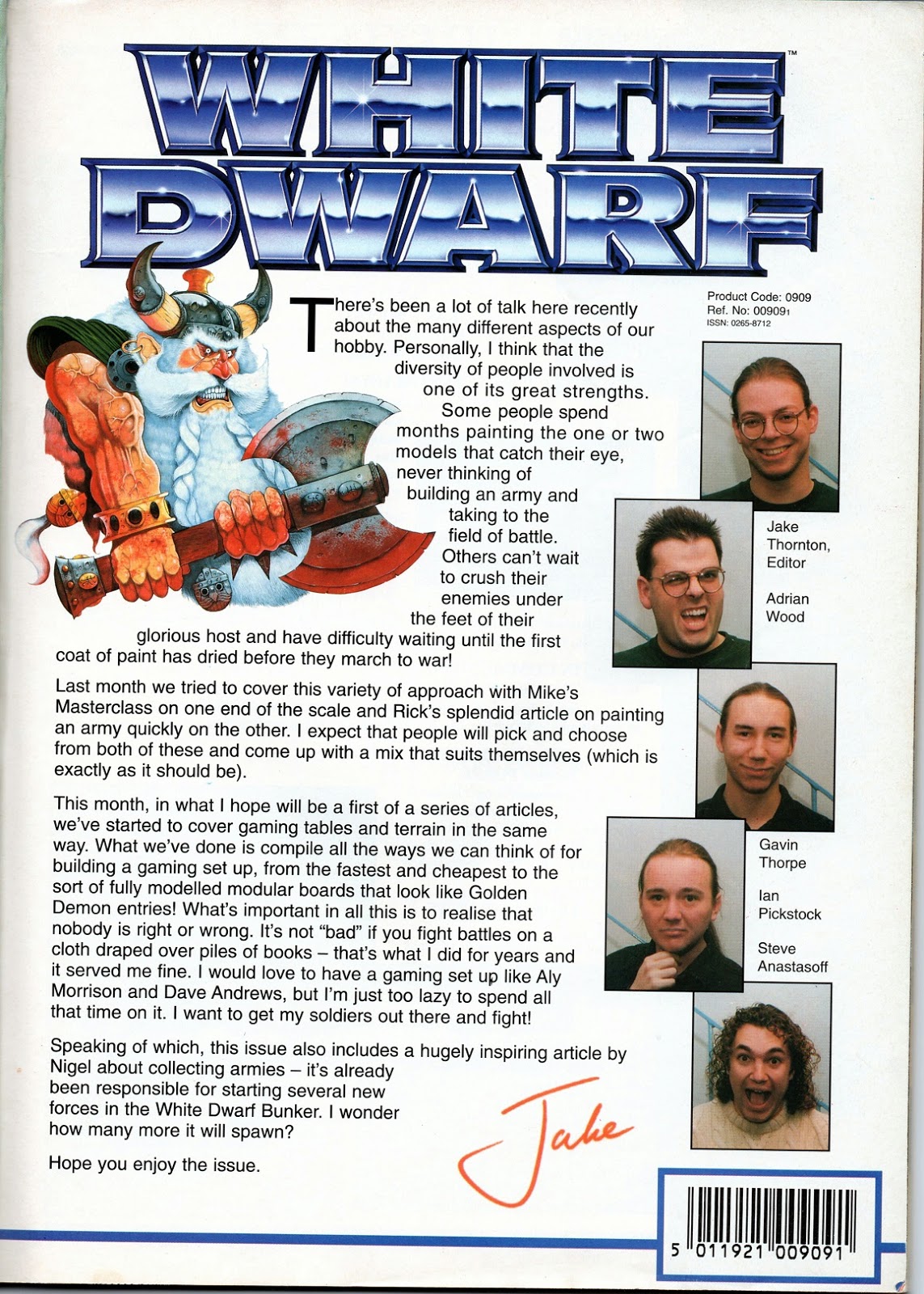 The editorial and meet the team page. Some look happier to be here than others.

The overall effect of this is to give White Dwarf a clear identity of its own, one that is at least in part distinct from Games Workshop and the studio. It is also making a clear attempt to justify itself on its own terms, which means providing useful content to its readers, albeit with varying degrees of success. Say what you like about the aesthetic choices of the era, and they are certainly out of keeping with Games Workshop of today, but there is a sense that the team behind this issue were really trying to produce a good gaming magazine.
1 comment: