So everyone remember my brilliant plan to stick to one project at a time? Also, does everyone remember how I was going to focus on painting my English Civil War models while I continued my Shadow War campaign with, now, fully painted models?

Well that went a bit wrong, when I accidentally slipped and bought some stuff for Warhammer: Age of Sigmar. I am a bad person. 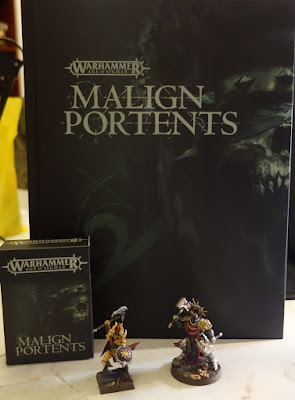 In my defence, it came about because I was meeting up with my little brother for the Beachhead show in Bournemouth, largely because it's closer to him than me an meant I could do the travelling for a change. I was looking for a way to spend a bit of money without derailing any of my existing projects (because why go to a wargames show and not buy anything?).

Malign Portents is Games Workshop's later Winter/early Spring event and has consisted of a, relatively low key, online campaign accompanied by the release of a rule book and four new character models, collectively referred to as Harbingers. Although I have largely avoided Age of Sigmar, my eye was drawn to the characters because all four of them slot into armies I already collect.

The Darkoath War Queen is part of the "Slaves to Darkness" faction which basically means Chaos Warriors, the Fungoid Cave Shaman is a Night Goblin/Moonclan Grot, which I have been collecting for years but haven't got round to painting. The Lord Ordinator is supposed to be a Stormcast Eternal, but he doesn't actually do anything for the faction of which he is a part. Instead, he boosts up War machines, which makes him a perfect fit for my Dwarfs. Finally the Knight of Shrouds is essentially a souped up Wraith and can be just about squeezed into my rather unfocused and scrappy collection of Undead. 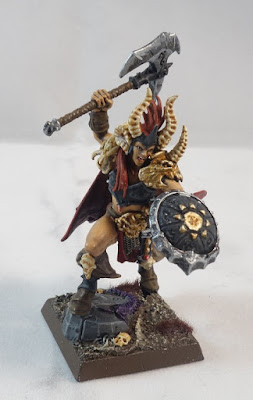 My thinking was that if Warhammer 8th edition were still around and Games Workshop put out four characters all of which fit into existing armies and two of which fit into armies I have painted, I would snap them up. It seemed a silly time to be dismissive of Age of Sigmar.

I picked up the Lord Ordinator and the Darkoath War Queen at Beachhead, along with the rulebook and grabbed the other two Harbingers since. I painted the first two in double quick time and even managed to squeeze in a quick game to test out the Malign Portents rules. 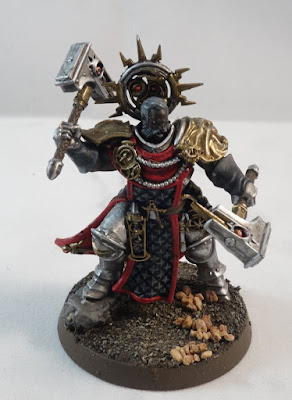 Speaking of which, the Malign Portents book is rather good. £15 for an 88 page hardback, makes it one of Games Workshop's cheaper books and compares pretty favourably with the army books I bought in the late 1990s and early 2000s. It's a bit of a grab back of background material, scenarios, rules for the new Harbingers and for the titular "Malign Portents." It also has a fairly good balance of background material to rules and with only a few pages of photographs of models and minimal filler. A big improvement over the early Age of Sigmar "Realm Gates" books which seemed to be all bulk and no content.

The premise of "Malign Portents" is that the Great Necromancer, Nagash, now promoted to God of the Dead, has been gathering up all the magic in the Death realm of Shyish for some nefarious purpose. This has led to all kinds of omens and portents which have been interpreted by Wizards, Priests and the Harbingers. In game terms, this is represented by Prophecy points which are randomly determined at the start of each turn. The points can then be spent on various special effects by any character, rather like spells. The effects you can use are determined by the portent you are following which you can choose or randomly determine at the start of the game.

In addition to the six general portents, each Harbinger also has a set of special effects unique to them. With all of these special effects in play, Games Workshop have, conveniently, put out a deck of cards with all the abilities on them, for you to keep track. This an obvious money grabber, but I snapped them up anyway because I am a mug and because they reminded me of the spell cards from 4th and 5th edition Warhammer.

Overall, it's a pretty decent rule book with something for most players. Even if you don't want or can't use the Harbingers, the Malign Portents can still be used by other characters and there are a few scenarios to try out, including one for Skirmish games, as well as a few extra random tables and special effects to use if you want to play in the Realm of Shyish.

Overall, given the relatively low price of the book, I can see Malign Portents encouraging a few past players to give Age of Sigmar a second look, so smart marketing on the part of Games Workshop.

And just to prove I haven't completely neglected my official projects, here is my latest unit for the Pikeman's Lament: 12 Musketmen including one with a long hunting musket. There is an example of one of these at the Basing House Museum, so I couldn't resist including in my company.

With my Shadow War campaign is under way and most of the models for it painted, I have had time to try painting something else. Shadow War could keep me busy gaming for some months, which means I have plenty of time to focus on a project that's likely to require a lot of painting before I can do anything useful with it.

A few years ago I picked up one of Warlord Games English Civil War starter battalion boxes. I've added a few extra bits and bobs to it since, but never got round to assembling or painting any of it. Part of the problem was that most English Civil War rules seem to require an awful lot of models to play, at least as many as one of my Warhammer armies, and I would need two to do anything with them. The other problem, was not being able to decide on a theme, or even a colour scheme for my army.

The first problem was solved when Osprey Publishing conveniently released "the Pikeman's Lament" a set of rules by Daniel Mersey and Michael Leck, developed from Lion Rampant and Dragon Rampant and designed to represent skirmishes between small companies of men. Having gotten hold of the rules, I realised pretty quickly that I could easily put together two companies of 24 points with the models I already owned.

The second problem resolved itself when I took a trip to Basing House at the end of September last year. Basing House would be one of the most impressive Tudor Houses in Britain if it wasn't completely in ruins. Once that Home of the Marquis of Winchester, it withstood a long siege during the Civil War before finally being stormed by the New Model Army under the command of Oliver Cromwell. The house wasn't actually destroyed by Cromwell, but it was left abandoned and much of it was scavenged to provide building material for the local village of Old Basing. The sight is worth a visit, featuring a small Museum and a visitor centre and there's an audio tour you can download from their website. The place is in walking distance of Basingstoke Railway Station, though you will have to trample through some muddy fields to get there. 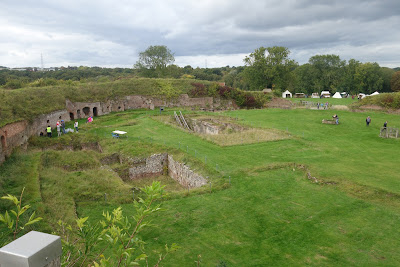 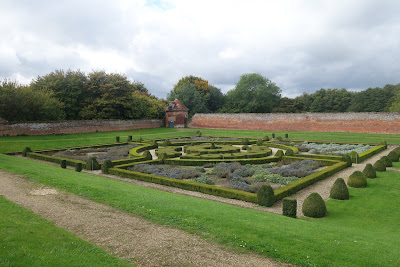 Though the gardens still look nice

The sight also hosts an annual Civil War re-enactment day. Last September, historical re-enactors from the The Marquess of Winchester's regiment set up a living history camp, carried out some Pike and Musket drill and enacted a small skirmish between infantry and artillery. It was all pretty good fun and I got plenty of pictures. 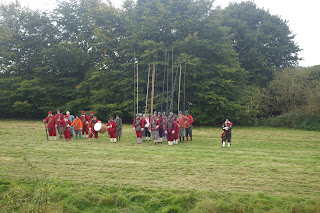 The Regiment on display

It occurred to me at the time, that I had more than enough models to recreate all the people involved in the event and more. Also, a large house under siege could be a pretty interesting backdrop for more than a few skirmish games. I finally had my theme. 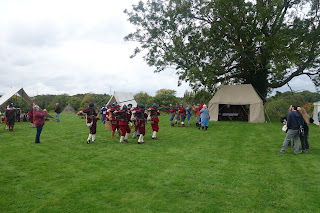 My first Pikeman's Lament unit is this group of shot, all armed with standard Flintloque muskets and wearing the regiment's red coats. Although I kept the red as a linking colour, I tried to vary the look of them as much as possible. This was before the era of true mass production or industrial dyes.

I've seen units that mix together all of Warlord's plastic shot models, but that didn't look right to me as this group are clearly marching, while the others are firing. Instead, I decided to keep all the marching models together and relied on different hats, swords, weapon poses and painting to differentiate them. The models were painted as a block, so I kept things simple with only base colours, one wash and one layer of highlights, with an additional highlight on the faces. 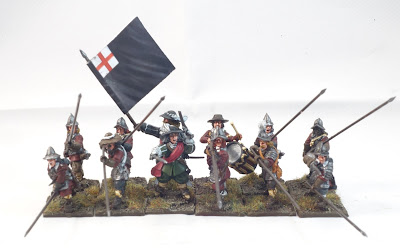 My second unit are Pikeman. Despite having plenty of plastic pike, most of these are actually from a box of Warlord metal armoured Pikeman. The reason for this is that the re-enactors mostly wore armour and Warlord's plastics mostly don't. The Winchesters justify their look on the basis that the Marquess was a rich man who could afford to equip his men well, but I suspect most of them just like being well kitted out. I decided to follow the re-enactors, though the command group are plastics from Warlord. The Batallion box even came with an appropriate flag that matched the regimental colours. 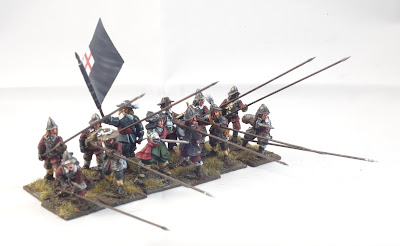 Two units down. With the Pikeman upgraded to Veteran, to represent their armour, that's 10 points so far. I still have another unit of Shot, a unit of Commanded Shot (skirmishers) and a Cannon to complete.

Incidentally, if you're interested in the Marquess of Winchester Regiment, they have a website at www.marquisofwinchesters.co.uk with plenty of good pictures and also feature fairly prominently in the first episode of the series Weekend Warriors, which was screened on the Yesterday Channel in the UK. The episode is available on demand here though you may have to register to watch it.
No comments: