Having made a pretty decent start on my Death Guard, I thought it was a good time to go back to my Blood Angels, starting with a regular Marine Tactical Squad.

I'm in no way a competitive player, if I were my Blood Angels would probably be all Sanguinary Guard and Death Company with the compulsory troop choices made up of Scouts and, maybe, Intercessors. But I was never going to feel comfortable about that. I decided I wanted my army to have a theme and that it would represent the Fifth Company of the Blood Angels Chapter.

I chose the Fifth Company because they are a Battle Company, which means I can have a nice mix of different troop types and their company badge is a black blood drop, which looks cool. At full strength the Company would have Six Tactical Squads and Two each of Devastator and Assault Squads. But, thanks to losses sustained in the Tyrannic War, my Company has been augmented with Primaris Marines who are  still being integrated into the company structure - what this means is that I don't have to paint up all ten squads if I don't fancy it. Though I do have enough Tactical Marines for four.

My Tactical Marines are a mixed bag of models, some of whom I got when Warhammer 40,000 3rd edition was released. Some came from the 7th edition Kill Team box, which I planned to use as an excuse to get back into 40K, and then didn't. And some are Blood Angel Tactical Marines from the Starter Box, which I bought principally for the Baal Predator.

I have mixed and matched the different parts and models together so that no one squad looks too over done and I am quite happy with the result so far. I've got my technique for painting Blood Angels pretty well practised now. These were Painted in Mephiston red, with a wash of Carroburg crimson and edge highlights in Evil Sunz Red.The Black areas are Abaddon Black highlighted with Vallejo Black Grey and the bone and parchment areas use Privateer Press Menoth Base and Highlight with a Griffin Sepia Shade. 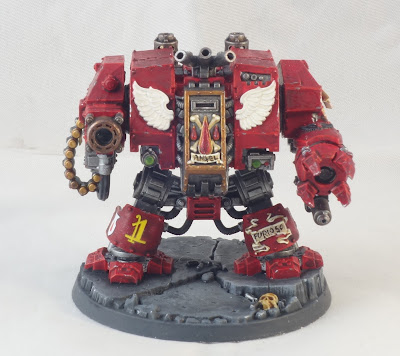 My next edition was something of an indulgence, but I couldn't resist a Furioso Dreadnought, who I have named Brother William for, reasons. I've been wanting a Dreadnought in this style since they first appeared, in metal, in 40K 2nd edition, but I only now got round to buying one. 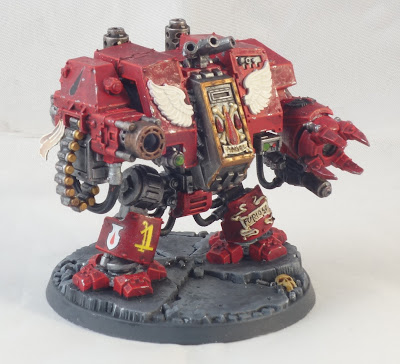 I used the same basic techniques as the regular Marines, albeit with a lot more metal. I also added a fair bit more battle damage in the form of metal chips and scrapes around the edges and quite a few transfers, most noticeably on Brother William's right leg. The only thing I am less than happy with is the Wings, which look rather too white in the photos, but are actually Vallejo Silver Grey with Off White highlights. 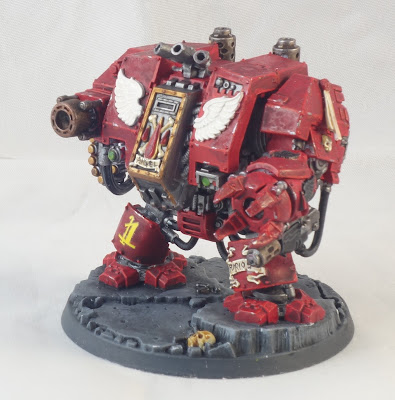 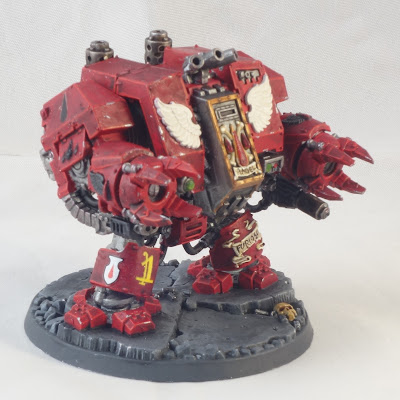 One nice feature of the kit is the way the arms slide on and off fairly easily and stay in place with no glue, so I painted up both right arm variants, allowing Brother William to be kitted out with Two Furioso fists or one fist and a Frag Launcher as the mood takes me. 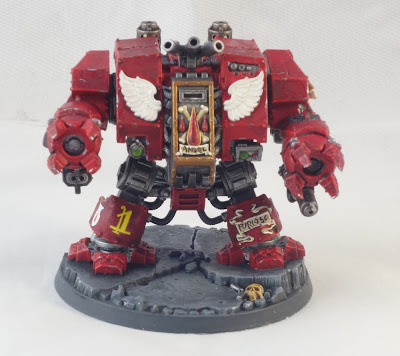 As has probably become apparent, what started as a Project based on the cheap Models that came with Warhammer 40,000 Conquest magazine has rapidly turned into an excuse to buy loads more models. This most notable in the squad below, fire Hellblasters with Assault Plasma Incinerators. In my defence, the Blood Angel specific box, which comes with a couple of upgrade sprues, is limited edition and rapidly vanishing off the shelves of discount hobby stores, so I snapped this one up while it was gettable. Also, the Hellblasters that come with Warhammer 40,000 Conquest only have regular Plasma Incinerators.

So far, I have only painted half the box, the other half have Heavy Plasma Incinerators. This was the first squad I undercoated with Mephiston Red spray, which sped things along a bit. 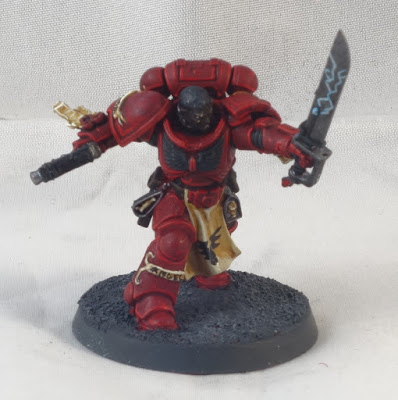 I'm not really a fan of either of the Primaris Captain models that have been released so far. The Gravis Captain looks chunky and awkward and the regular one too flat, as though he was cast in one piece. On the whole, I much prefer the Lieutenants, particularly the Chapter Specific ones. I picked this one up because I didn't like the idea of all my HQ units being specialists, I wanted at least one regular officer. 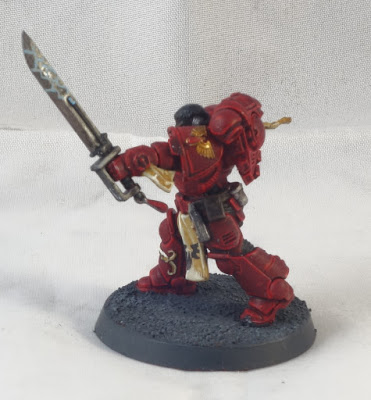 I pretty much stuck to my standard colour scheme, albeit with a gold shoulder logo and some electric blue lightning on the power sword. The Logo on his tabard is a transfer. And, as I write this I realise I forgot to add the Fifth Company Blood Drop to his right shoulder pad. 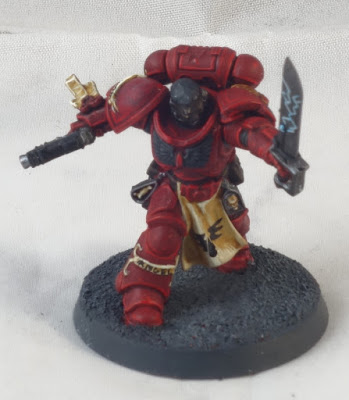 Finally, no Blood Angel Army would be complete without a Death Company Squad. I may not want the whole army made up of them, but I wanted at least one squad. These guys are actually pretty old models, dating back to third edition 40K, when I wanted to add some extras to the Marines I got in the starter box and the Blood Angel codex had just been released and seemed like more fun than conventional vanilla marines.

Although the bodies are pretty old, they do have at least a couple of more up to date weapons, most notably the Power Fist which my brother gave me, I think, from a Sanguinary Guard box he picked up cheap and cannibalised for parts.

I have actually had these picture ready for a couple of weeks now, but have been very slack about posting them. Since then I have completed a Chaplain and Rhino to accompany the Death Company. But with those completed, I am going back to the Death Guard for a bit. Pretty soon I should have what feels like enough painted models for a decent sized game.
No comments: