Recently, I've been doing my best to cut back on the amount of miniatures I've been buying. For the first time in about five years I skipped the "Call to Arms" show in Theale, on the grounds that I would just bring back more stuff that I didn't have time to assemble or paint. Of course, I blew it slightly by taking a trip into London and buying two more models for Bushido instead.

Bushido has acted as something of an exception to my "no new models" rule, largely because I want to keep up to date with the Temple of Ro-kan faction. But the fact that I have allowed this exception, says something about the effectiveness of GCT's marketing.

Games Workshop games are all but armies for me. I pick an army and buy models until it feels big enough. And then GW try to encourage me to start a new army. I don't expect to collect every model or unit available for the army and I may even restrict my choices to make it more thematic. While I wouldn't describe any of my armies as "finished" exactly, they are all of a size were I don't feel any great pressure to add any more models to any of them.

Oddly, Games Workshop's release pattern helps reinforces this behaviour. Every five years or so they release a new army book, I buy it and maybe one or two units or characters and that's it. My army is up to date. I don't feel the need to replace my existing models. Take the new dwarf book, I will probably grab it, King Duregar and a Gyrobomber and leave it at that. I won't replace my carefully painted metal hammerers with the new plastics any more than I replace my beloved metal miners when the plastic miners came along.

Bushido is different. For some reason, Bushido doesn't feel bounded in the same way as my Warhammer armies, so every time a new release comes along for the Temple of Ro-Kan, I buy it. Due to a combination of the small number of models required to play the game and the relatively low cost of each, I have started thinking of my Bushido models as a "collection" and not an army. Which means I need to buy the lot. Because new models are released every two months or so, there is never a natural pause and so I keep buying.

Bushido isn't the only game to do this. Warmachine/Hordes, Infinity, Malifaux, Helldorado, even Anima Tactics if it was more organised, all depend on a model of steady and constant releases, which keeps you army/gang/warband/crew in a permanently incomplete state.

It reminds me of when I was seriously into Magic the Gathering. Every time a new expansion appeared I had to buy a few boosters or feel like the game was leaving me behind. Consequently, the collection was never complete only constantly expanding. This is great for the company, as they get a steady income. The drawback is that players have to be pretty devoted to the game to keep up. Part of the reason I never really got into Warmachine was because I couldn't get the old models assembled painted and on the table before the next expansion came out, not when there was so many other games out there. As a marketing strategy, it encourages the fanatic at the expense of the casual gamer.

Of course much of the pressure is self-imposed. I have more than enough Bushido models to game with and I really don't need any more. And yet the pull is still there and, for the moment at least, I can keep up with the new releases without it totally monopolising my time.

In the last few months I have found myself drawn back to games that have effectively "died." Games Workshop's Epic and Mordheim and Confrontation. It's the lack of new releases that is the draw in these cases. With no more support coming, the games are "finite" and I can concentrate on painting and gaming with the models I have without feeling a compulsion to buy any more. Except, of course, for those last one or two Mordheim models I might get from Ebay...
1 comment:

And so it begins?

News is in that Hasbro have formed a partnership with a 3D printing company.

Of course the news report is all about 3D printed Transformers and "My Little Pony", but Hasbro owns Wizards of the Coast. Could we be seeing 3D printed Dungeons & Dragons miniatures in the not too distant future?

Labels: Hasbro, Wizards of the Coast

It's funny how seeing a small part of something can you the wrong impression of the whole.

The thing that first attracted me to Malifaux was the slightly gothic, slightly cartoony concept art, combined with who well it had been translated to the first metal models. I still love those early designs. They put me in mind of some of Tim Burton's best work, think Edward Scissorhands or Sleep Hollow, or, perhaps more accurately, the Nightmare before Christmas or the Corpse Bride. It was a look that also snuck into the Series of Unfortunate Events. A kind of caricature of gothic turned up to 11. 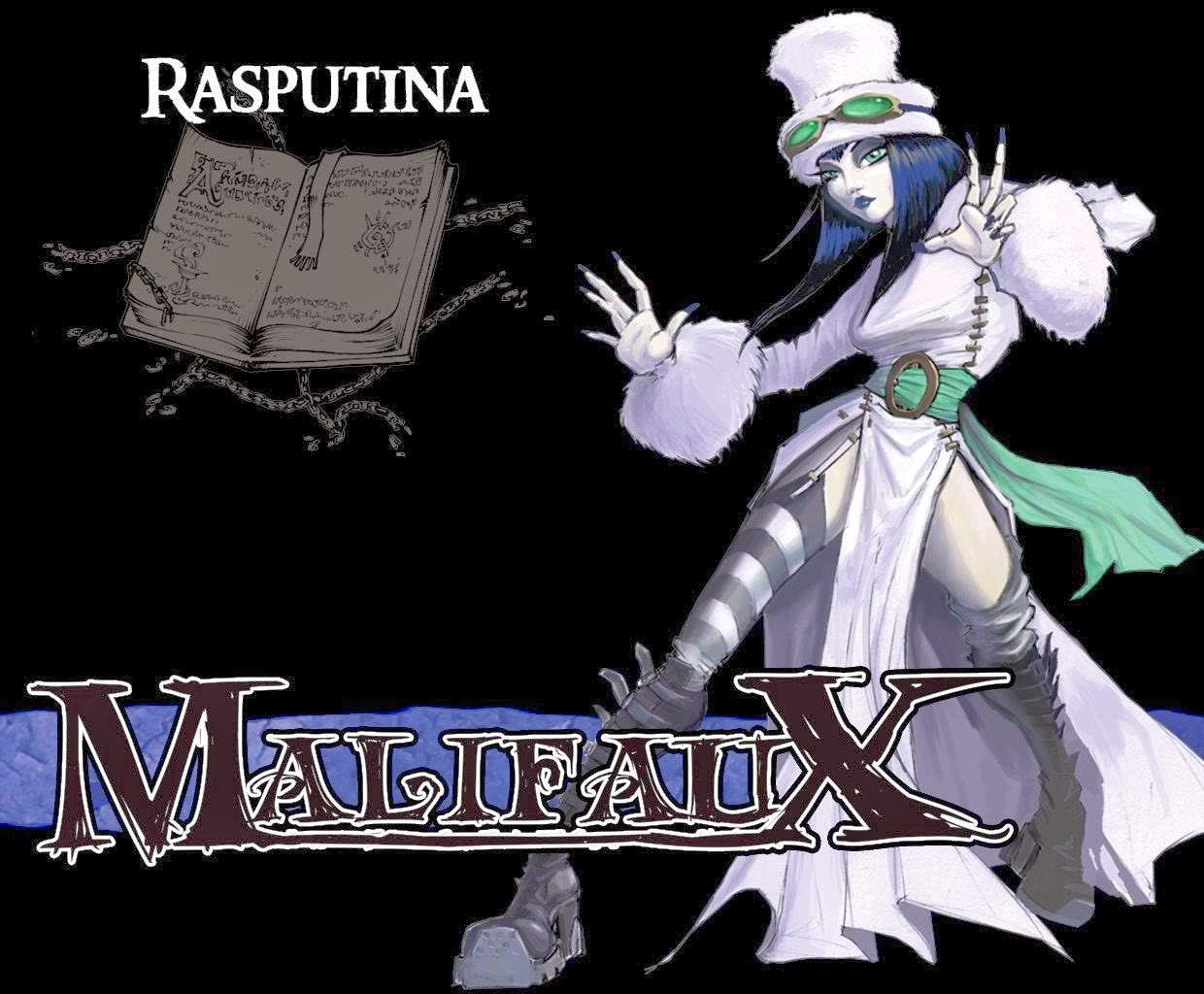 Take a look at the early Rasputina, with top hat, stripy stockings and pure white skin. Or Nicodem, with his ridiculously high collar, super-sized top hat, dark glasses obliterating his eyes and Judge Dredd chin. It was a look I wanted to recreate as perfectly as possible in 3D when I painted the model. 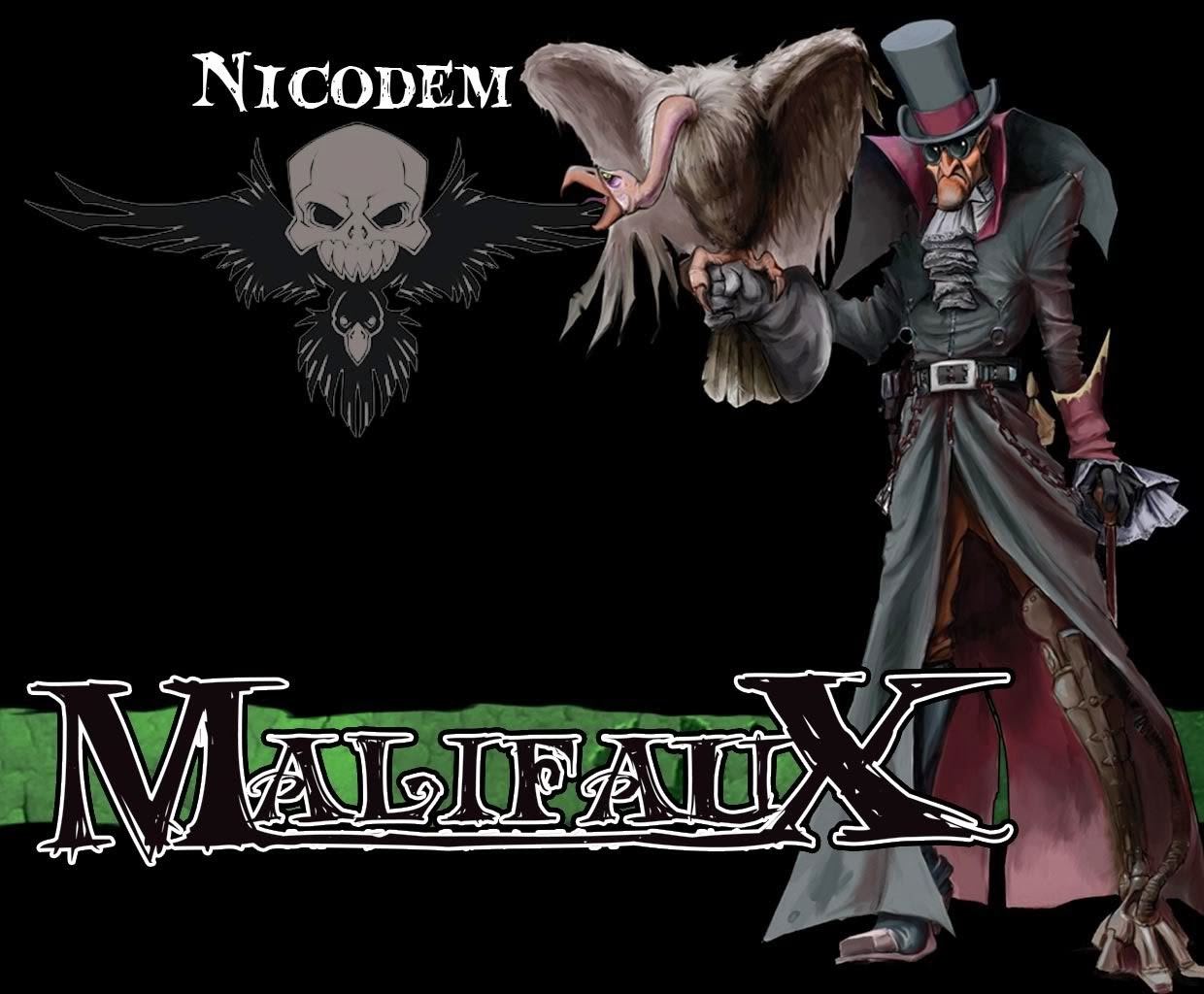 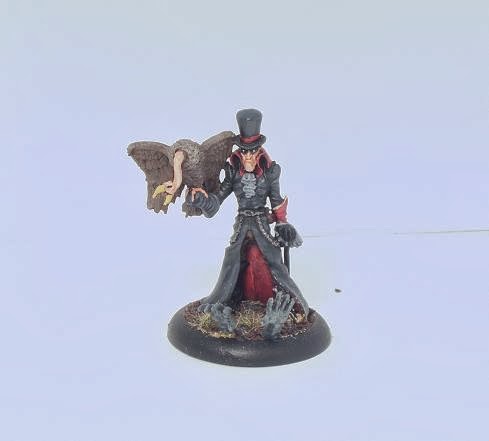 ...and my early Nicodem model

This is pretty typical for me. I have bought games, warbands, gangs, whole armies on the strength of a single illustration or a model that appealed and for whom I had to find a home. It's a tendency I have tried to reign in in recent years as it has left me with more than a few attractive but unplayed games.

In the case of Malifaux, I am reaching the conclusion that the creators idea of the game world was quite different than the one I assembled in my head from the art work. The first clue came in the rule back, which laid out a background story far darker and grimmer than the slightly playful, dark humour I had expected. But it has become increasingly apparent with the release of Malifaux second edition and the redesigned plastic models. 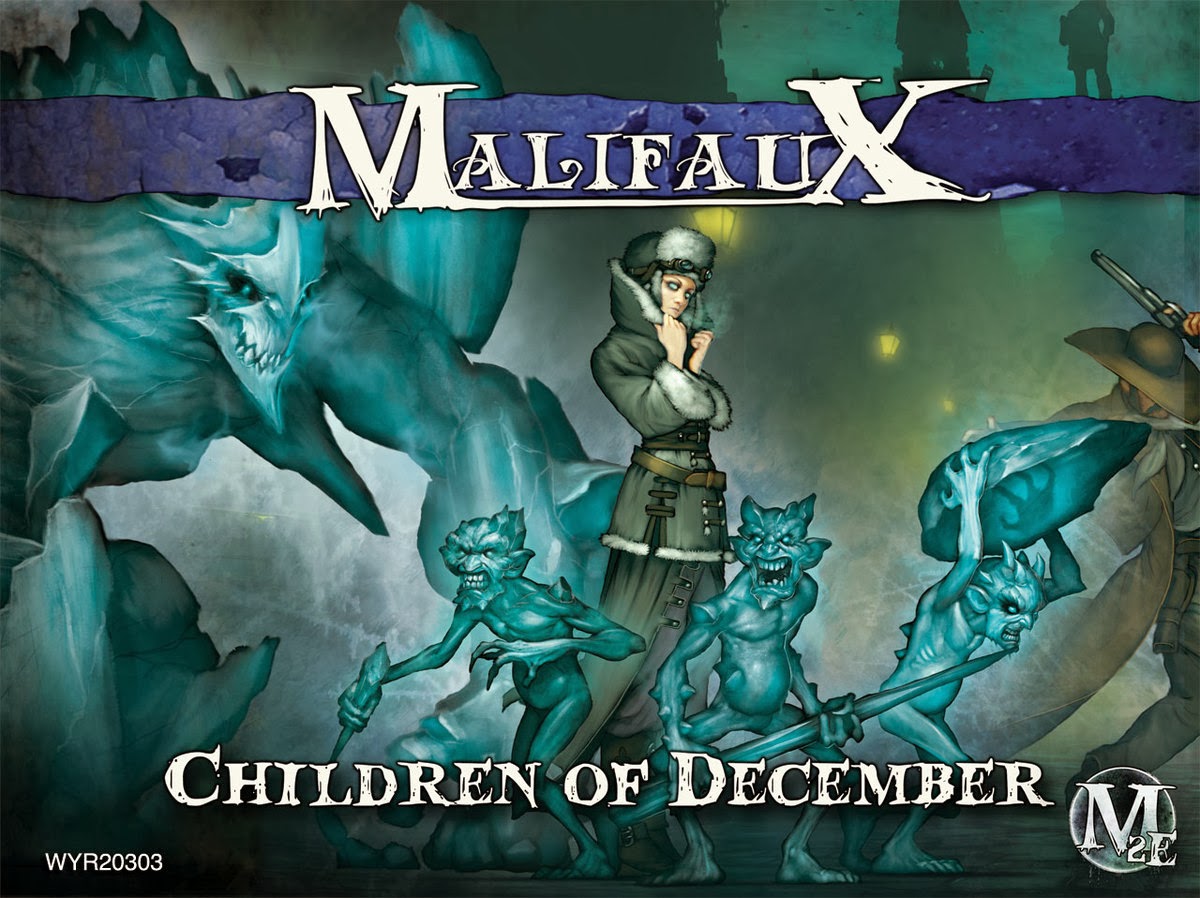 Gone is Rasputina's hat and stockings in favour of what could only be called practical cold weather gear. While her spindly Ice Golem, has been replaced with a hulking brute, and the previously playful Ice Gamlins have become far more sinister This is a world that, for all its fantasy elements, is far more grounded in reality than the one I thought I was entering.

Not that there's anything inherently wrong with this approach, it just doesn't appeal to me in the same way. My Malifaux models are now lying somewhat neglected as a consequence. It all goes to show the danger of over committing to a game based on a partial understanding of what it's supposed to be.
4 comments: