If you go back and read my blog posts from 2018, you'd be forgiven for thinking that I didn't do anything hobby related last year except play a few games of Shadow War. In fact, last year was pretty productive for me, I just got pretty bad at updating the blog. Rather than posting new pictures to the blog, I got into the habit of Tweeting things, which meant a few people saw them, but also that they disappeared pretty quickly into the ether.

So for no better reason than that I wanted a record, this is an update of one of my major projects of 2018, the two English Civil War companies I painted to use with the Pikeman's Lament rules, written by Daniel Mersey and Michael Leck and published by Osprey. This game is supposed to represent small actions with roughly 30 to 50 models aside.

I first posted about this project in March 2018. My plan was to paint up my two companies while continuing with my Shadow War campaign, occasionally breaking from ECW models to update my Kill Teams. In the end this is pretty much how it worked out and I managed to finish two complete companies of 24 points each, each made up of five units. 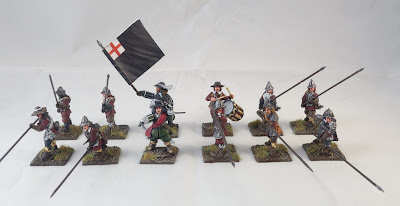 I started with my Royalist Company, who were based on the Marquis of Winchester's regiment Civil War re-enactors. The regiment they recreate were part of the garrison of Basing House, a now ruined Tudor Manor that's a short walk from Basingstoke and which I have visited a few times when the re-enactors have been in. They're supposed to be a well equipped company, hence the armoured Pikeman, but as they were mostly fighting a siege, they don't have any cavalry. My first unit was made up of Warlord Games metal armoured Pikeman, but with a plastic command group, including my company office in his nice green outfit. In game terms, I treat them as Veterans, which puts their point costs up to 6.

The Pikeman are supported by two units of shot, each worth 4 points each. I organised the plastic musketeers into one marching unit and one standing and firing. However, I didn't like the fact that the firing unit were all firing at once, so I added some metal reloading models. I have since discovered that at least some shot units did carry engage in mass volley fire, but I've painted them now, so tough.

This is a unit of Commanded Shot, skirmishers designed to hold up or disrupt the enemy advance. They are a mix of plastic and metal models I pinched from the Warlord Dragoon box. I also added the sniper with the long gun on the end. I was very keen to use him, because there is a long hunting musket on display at Basing House that may have been used in the siege. In rules terms I treat this unit as veterans, which means they don't suffer a -1 to hit if they skirmish (moving and shooting). This doesn't really represent a sniper very well, but there aren't really any rules in Pikeman's Lament that do, so it will have to do. Maybe, because he can shoot at a longer range, it gives him plenty of time to get up and move. The Veteran upgrade takes the unit to 4 points. 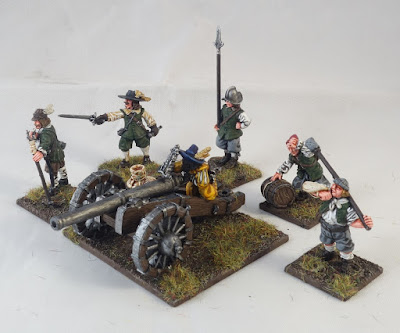 Finally I have included a heavy gun, worth 6 points, which has an engineer model added (he came in the same pack as the sniper). I like to imagine he is a foreign mercenary, hired for his expertise with gunpowder weaponry, hence his expensive yellow outfit and darker skin tone.

I have scattered a few black-British models in with the company. I don't know if this is historically accurate or how many black-British soldiers fought in the Civil War, but there were black-Britons as early as Tudor times, so I imagine the answer isn't "none." Also, every time a costume drama casts a black actor you get a few racists on Twitter or message boards complaining about "political correctness" which seems as good reason as any to include them.

The cannon is worth a mighty 6 points.

My second company are Parliamentarians, who represent men from Sir William Waller's regiment, who besieged Basing House in 1643. According to this website they wore yellow coats and carried a blue flag. 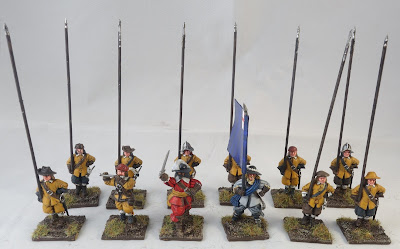 The infantry consists of one unit of Pike and one of Shot, though these are just standard units worth 4 points each.

I painted the models in both companies in much the same way. I gave them a spray undercoat of Army Painter Chaotic Red for the Royalists and Dessert Yellow for the Parliamentarians. I kept the detail simple, with one shade and one highlight with a second highlight for faces and skin, though I took a little more time over command groups. I gave most models matching coats, but tried to vary other colours because soldiers would have mostly worn their own clothes. I mostly kept to dull, earthy shades as tis was the era before chemical dyes. 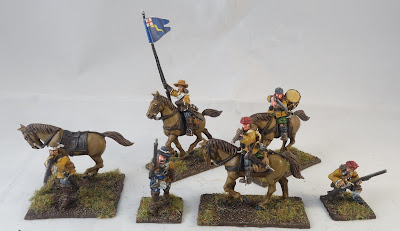 I included a unit of Dragoons, mounted infantry that would move about on horseback and dismount to fight. Unlike many Pike and Shot rules, the Pikeman's Lament doesn't require you to include two sets of models, one on foot and one mounted. Instead it recommends a mix of mounted and unmounted models. Warlord's Dragoon box includes 12 mounted models and 12 on foot, which gave me plenty of spares. I plan to pain up some more to represent a Royalist Dragoon Unit at some point, but I still had a few left over to use for my Royalist Commanded Shot unit. I particularly like the model who's kneeling down to reload.

The Dragoons are a bit of a cheat. Apparently Waller's own regiment started out as infantry and were later mounted as Dragoons, so I have taken a bit of a liberty with history by including both in the same company.

My final infantry unit is a group of Forlorn Hope, which in Pikeman's Lament are small, elite units worth 6 points. These are represented by Warlord's plastic Firelock Musketmen, though I used a few spare hats from the infantry to give them some variety. 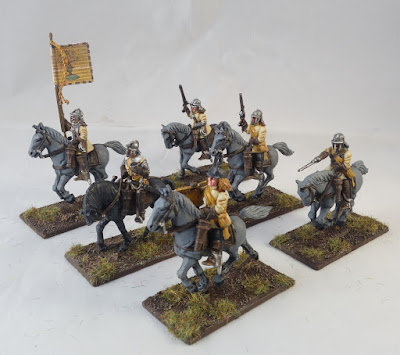 Finally, I have a unit of Parliamentary Cavalry, lead by the company Officer. Cavalry can be either Trotters, who advance slowly and fire pistols at medium range, or Gallopers who move at maximum speed and engage with swords and pistols at close range. I made this unit Trotters as that style is more associated with Parliament, though, in reality, I don't know how Waller's regiment would have fought. The Officer doesn't represent Waller himself, but one of his subordinates. The flag is based on the actual regimental flag, which I found online, scaled down and printed out. 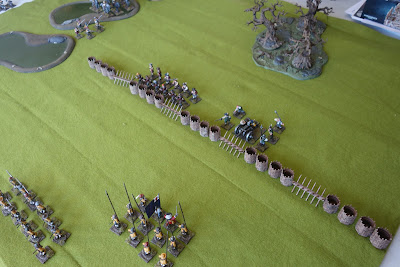 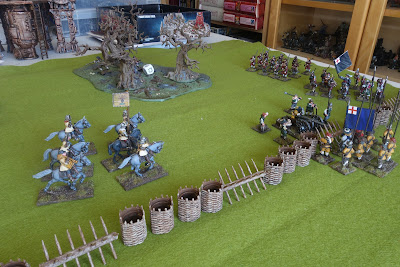 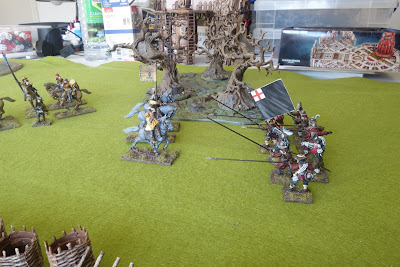 Here are some pictures form a quick game I played to test out the rules. The Parliamentarians attempted to break the Siege by advancing through Marsh Land to attack a vulnerable spot in the Royalist defences.

The game was a lot of fun. The rules are very similar to Lion Rampant and Dragon Rampant and units have to pass tests in order to activate, with them being more likely to activate if they're ordered to do something they are comfortable with (it's easy to get musketeers to shot than charge, for example). Both sides suffered there fair share of failed orders, but in the end Parliament triumphed, though their office was killed by a lucky shot.

It's definitely a set of rules I would like to play again and there are plenty of different scenarios in the book to try out now that everything is painted.

I plan to be better at posting project updates this year, so, hopefully, the next post will not be such a massive info dump.
No comments: