Beyond the Gates of Antares - An Unexpected Encounter

For my next Beyond the Gates of Antares game, I went to 500 points a size, the minimum supported by the army lists and tried some more varied units. I didn't fancy playing the most straightforward, "kill everything" scenarios, so I tried scenario 3, "An Unexpected Encounter." Both sides were trying to get into their opponent's deployment zone and stop their opponent doing the same. Each unit into the enemy zone was worth 3 victory points and each opposing unit destroyed was worth 2.

The Ghar were a bit more varied. A squad each of Battle and Assault Troopers, a squad of Outcasts with a disruptor cannon and a shard of 6 Flitters. I purchased the "pull yourself together" army option to make up points and then forgot to use it all game.

I didn't take very detailed notes on this game, because I wanted to concentrate on the game, but I jotted done a few bits and bobs and took a few pictures. 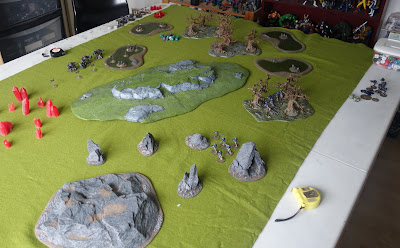 Each side was only allowed to deploy half their force, with the other half moving onto the table on the first turn once they passed a command check. The Ghar Flitters, as a probe unit, had to be deployed and they were joined by the Assault Squad. One Concord squad deployed in a wood, ready to defend the deployment zone from any approaching Ghar, while a second deployed ready to advance through some rocks on their left flank.

The Concord moved on smoothly on the first turn and advanced quickly. But there lead squad came under heavy fire from the Assault Ghar, whose Gouger guns were inaccurate, but good at pinning. They were backed up by the Battle Ghar who wiped out the squad before turning their attention to the Medium Support Drone, the firefight between the two would last all game. 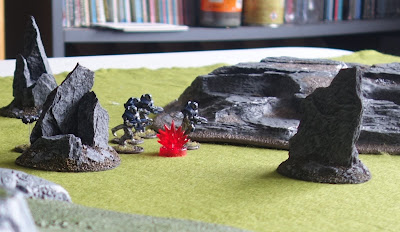 The Concord advance comes under fire

The more cautious second Concord squad advanced over the central hill and opened fire on the Ghar Outcasts, killing four of them. Surprisingly, the Outcasts passed their break test, but backed off.

However, the shooting attracted the attention of the Assault Ghar who launched a close assault. At this point, things went a bit strange. The Ghar's Disruptor Dischargers, essentially grenade launchers, killed 3 Concord, but the Concord responded with a lucky hit at close range, killing 1 of the Ghar. In close combat, the Assault Ghar should have had the overwhelming advantage, but they only rolled a 1 for their strike value (Plasma Claws have a 1d4 strike value, effectively a saving throw modifier) and couldn't get through the troopers armour. The trooper struck back, hitting the Assault leader who, failed his resistance roll on a 10, the only way he could fail, and then, amazingly, failed the re-roll, leaving only one solitary trooper remaining. Having both suffered heavy losses, both sides broke, but the trade was well worth it for the Concord. 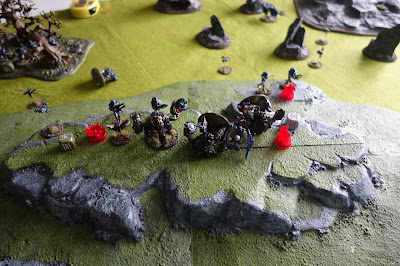 The Ghar assault does not go as expected.

By now, it had become apparent that neither side had advanced quickly enough to reach the opposing deployment zones, so it was all going to come down to casualties and, at this point, the Ghar had the advantage. The waiting Concord squad 1 broke cover and went after the Outcasts. 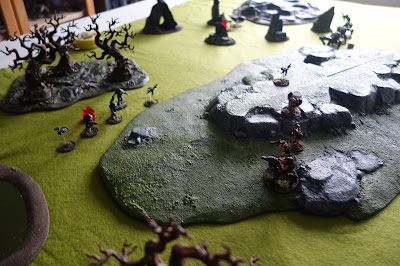 The Outcasts come under fire

The Outcasts had the choice of standing and fighting or running and reducing the Concord's shooting effectiveness. It seemed more Ghar to shoot back, and they did have a Disruptor Cannon. The Outcasts gave a good account of themselves, killing 2 troopers, but in the end they were wiped out.

On the other side of the hill, the Battle Squad and Drone's fire fight concluded with the Drone immobilised and one of the Battle Suits destroyed, but this wasn't enough to score any points. 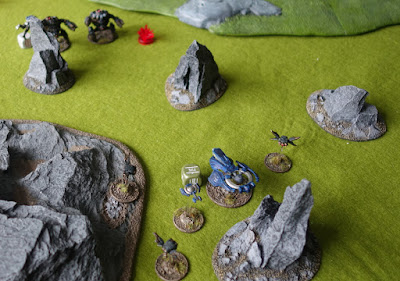 The game ended with a 2 all draw.

A few notes on the game.

1. It plays very well at this level; quick and simple but with enough crunch to keep things interesting. I was done in just over 2 hours. I hope it continues to scale this well.

2. Pinning continues to be important, but not decisive. No squad had more than 1 or 2 pins at any time except during the assault. In a larger game, it concentrating fire might be more possible, and that might prove more decisive. One thing I keep forgetting is that pins effect shooting and not just command roles. I'm still getting used to this mechanic.

3. Assaults don't play quite the way I expected. Ghar, with a strength of 10, are almost certain to hit, but they don't have a lot of attacks and even Assault Ghar don't have a huge strike value, so troopers have a good chance of surviving. Close range fire proved more effective.

4. Speaking of assaults, the one in this game was obviously atypical, but I'm glad BTGOA is the kind of game where these odd situations can occur. Personally, it's these bizarre situations that I remember best.

5. The Flitters survived the game largely intact, mostly because there were always greater threats than them to shoot at. They helped the Ghar, but didn't tip the balance.

5. I'm still not sure of the best tactics for the Concord to use against the Ghar. I think concentrating fire is key.

For my next game, I want to jump up a level to 750 points, which will let me use my Ghar Command Crawler.
No comments: