I've been building up a bit of a backlog of these Shadow War campaign reports. Not intentionally, I've just been playing games, taking pictures and forgetting about the next step. Plus, getting distracted by chronic racism and sexism in the wargaming community hasn't helped. 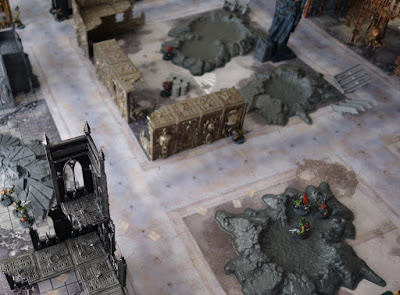 Anyway, after the last, slightly frustrating, encounter between the Sisters of Battle and the Tau, round 3 ended on a high note with a classic confrontation between Space Marines and Orks. The Mission was a Hit and Run with the Orks attacking and aiming to steal the Space Marines loot. The Orks have a major advantage in this scenario as they're allowed to bring an extra 3 team members when attacking. The Space Marines, for there part, were spectacularly unlucky rolling only two defenders to start the game. They went with Brothers Raphael and Michael because they were armed with Bolters and had a longer range. 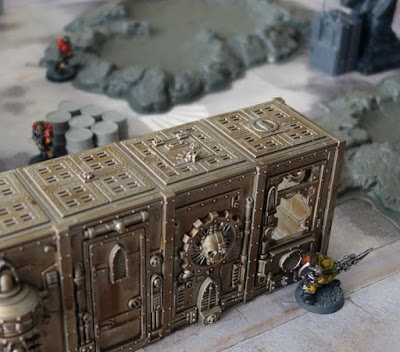 The Orks drew first blood, when Fuzzle took out Brother Michael with the first shot of the game. He then immediately failed his ammo roll. Presumably he just emptied his entire clip until he hit something. 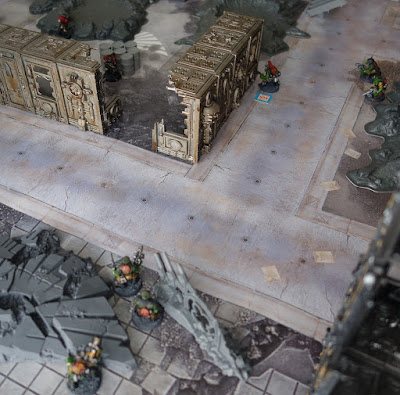 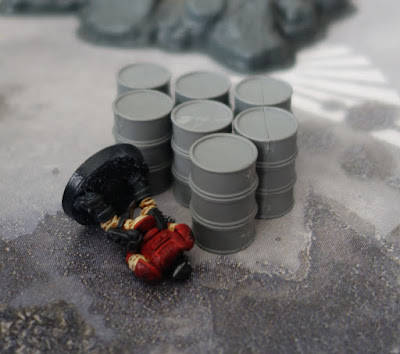 Brother Raphael proved to be made of sterner stuff. Fragrap flamed him (also running out of ammo) and Sergeant Bogrot hurled a stikkbomb at him before Fragrap finally finished him off in hand to hand. 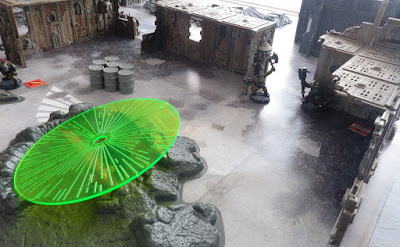 Fire in the Hole

By this point reinforcements were arriving. Unfortunately for the Space Marines, they were arriving on entirely the wrong side of the battlefield. 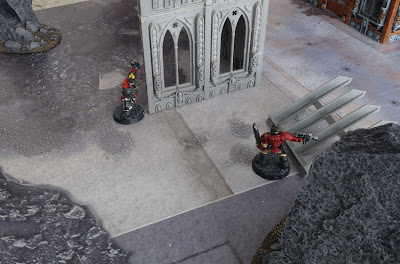 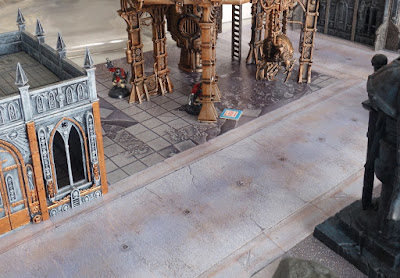 Giving Molk ample opportunity to make off with the loot. 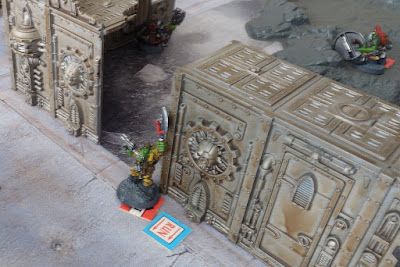 The Orks took the opportunity to make a "Taktikul Wivdrawal" and it looked like they might make it off the table and win the day without another shot being fired. 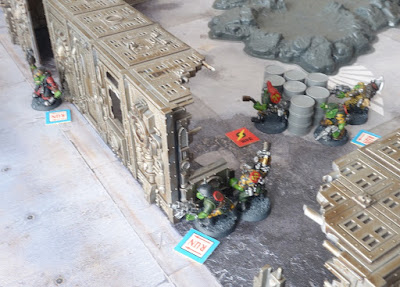 But at the last moment, Novices Sebastiano and Niccolo ambushed the Orks from their own table edge. 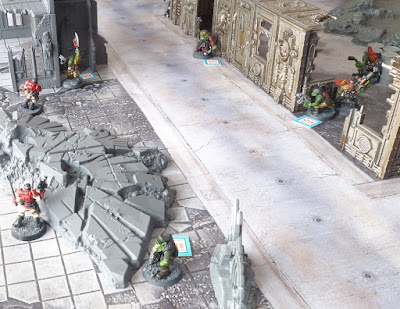 Molk was taken down, forcing Sergeant Bogrot to grab the loot. Meanwhile, the rest of the Space Marines were catching up. Forcing Razan to act a rearguard. 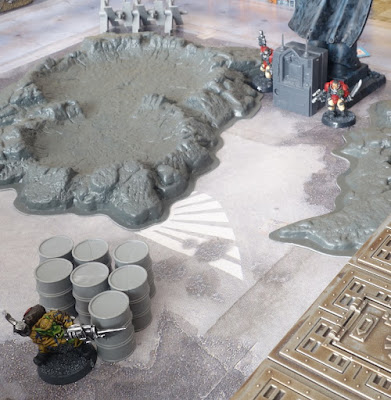 But in the end, Novice Sebastiano was taken down, and a wounded Sergeant Bogrot made it off the table with the loot. 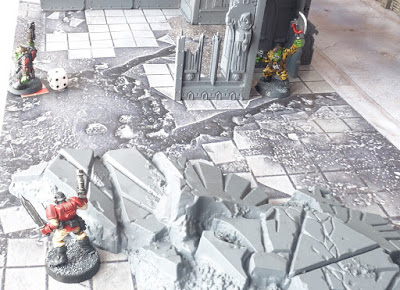 This was an enormously fun game that ended on a knife-edge, after initially looking like the Orks would walk it. The Space Marines were pretty unlucky at the start, first with only two defenders and then with all their reinforcements turning up in the wrong place, but Novices Sebastiano and Niccolo timely arrival almost swung things. If it weren't for Sergeant Bogrot's two wounds, it's unlikely the Orks would have won.

In the event, the Orks victory didn't make much difference. Both sides came away with only 1 data cache, though this put the Orks on 7, leading the campaign. They recruited Grob and Skym, an Ork boy and a Yoof respectively. While the Space Marines recruited Novice Angelo, taking them to 9.

With round 3 complete, it felt like a good time to check out the campaign scores.

Sergeant Bogrot's lads remain the only undefeated Kill-Team, though their first victory was largely down to good luck. They were also winning on Data Caches, though the Tau, Sisters and Space Marines were just behind them. While the poor Dark Eldar were stuck at the bottom, seemingly unable to catch a break.

A Shadow War campaign is supposed to run until one side has 15 Promethium Caches. My original plan was to adjust that to 10, but add in a final, big battle to round everything off. Given that, if the Orks got lucky they could trigger the end game after round 4.

As I wrote at the start, I have a backlog of these to write up so, hopefully, I will let you know soon who things went.
No comments: