Blood in the Badlands

A week or so back I picked up Blood in the Badlands, Games Workshop's new Warhammer supplement, more on a whim than anything else, but I have been pretty distracted and it has taken me a while to gather my thoughts. 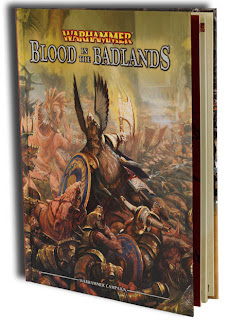 It's an unusual book, billed as a set of campaign rules, but it also covers fighting underground and provides siege rules for the first time since 6th edition. I was half expecting something like the old Generals Compendium, a mix of rules and articles none of which quite fitted into a coherent supplement. It is a bit like that but not quite.

Basically, the White Dwarf staff ran a campaign set in the eponymous Badlands region of the Warhammer World and this is an account of it, along with the rules they used. At heart its not very different than the kind of "campaign chronicle" that any gaming group might put together except for being nicely bound and illustrated with colour photographs. It's an unusual way for Games Workshop to present a set of rules, essentially introducing them with examples in the form of battle reports and accounts from the players. It's also quite a good way to stagger the rules, with certain elements only coming into play as the campaign evolves.

In a strange way this reminds me of the old Realms of Chaos books, or of Warlord's Black Powder and Hail Caesar rules, not in terms of tone and content, but more in the sense that this provides a tool box of ideas that players can dip into as it suits them, taking what they like and discarding the rest. It is certainly possible to play the campaign as written using everything and background to the Badlands is included, but equally players can simply take inspiration from it and develop their own rules using the book as a pointer as to the kind of problems they will need to solve.

The rules are also enjoyably personal, with elements that clearly only apply to the team's own campaign. For example, the siege rules include a specific over the top Skaven artillery piece clearly converted by one of the players. I don't think the intent is to give the Skaven a specific advantage so much as to inspire players to develop their own custom rules.

The only real draw back to the book is the price, which at £20 seems rather high for the amount of content. I suspect I have mostly paid for full colour pictures and hard back binding. Though, in its defence I think it benefits more from being well illustrated than from the recent Warhammer Army books as illustration is a large part of the point of the book.

Overall, I am rather fond of this. It won't be to everyone's tastes, especially if you prefer rules to be highly rigorous and complete. And I don't know how much of it I will actually use as yet, but I still think there is a fair bit here of interest. More than that though, I enjoy the concept and style of presentation. It feels like a book about gaming rather than simply one to sell games and these days, from Games Workshop, that is quite refreshing.
No comments: