Despite the appearance of some new Chaos pictures last week, I haven't actually been working on Chaos for a while. In fact, apart from a few Anima Tactics models (of which more later) I haven't done a lot of painting this year. The reason for this is below. 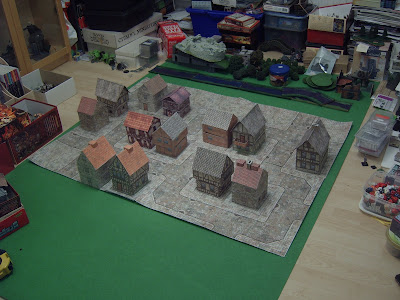 Not my name, I hasten to add or even my designs. The designs come from Fat Dragon games a company that specialise in card terrain in PDF form that you print and assemble yourself. You buy a product and are given a link to a zip file containing a number of PDF documents. You can then print these out to card, cut them out and stick them together to make your scenery.

A number of companies doing this that have sprung up in the last few years taking advantage of the Internet as a distribution system and broadband making large downloads a reasonable possibility.

I have been using cared scenery in my games for a while. You may have noticed card buildings and fences in my previous posts, these were made by World Works games (and two of their buildings have been added to Dragonshire with a few modifications), another company doing the same sort of work. I don't have any strong preferences between the two companies, they both do fine work, but Fat Dragon had a sale on and so I scooped up Dragonshire for less than ten quid.

Card terrain is becoming increasingly popular, though it seems to be aimed principally at role players, possibly because of the need for a range of layouts assembled quickly. In the wargaming world there is an element of snobbery about this kind of terrain, with some gamers preferring more three dimensional models, either built from scratch, from resin or, increasingly plastic.

The drawback is that this kind of scenery can be expensive and usually has to be painted, if not made from scratch. It can look stunning, but not everyone is an expert modeller and painter. The advantage of card modelling is that with a relatively small amount of work you can have a range of scenery that looks good on the table. If not quite as good as the sort of thing the experts produce.

Dragonshire comes with a range of base tiles you can print out to form your town/ city streets. Fat Dragon recommends mounting them on foam card. But I preferred to mount 12 onto large sheets of thick card, as its cheaper and less likely to come apart in the middle of a game. A bit of careful planning and I was able to produce four base boards that can be arranged in a number of formations.

Below are the four different boards: 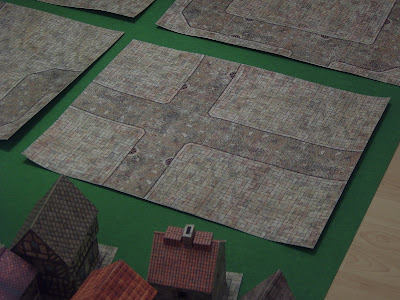 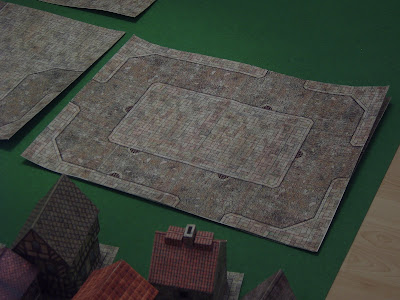 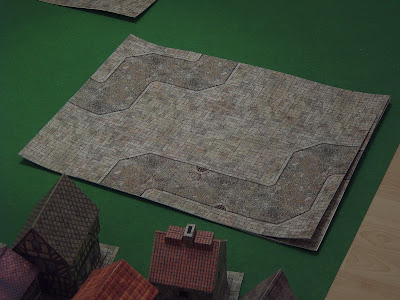 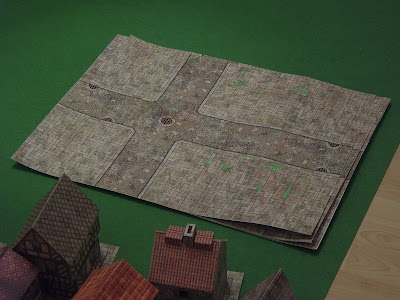 If you look carefully, you can see that they all have a road leading off at the top, bottom, left and right, so they can be put together in any formation. That should make for a fair variety of layouts.

I still have plans for a couple more boards as well as a few more extra bits and pieces, such as carts, market stalls, barrels and so on to make games a bit more cluttered and interesting. The town will probably be principally used for Anima Tactics and other skirmish games, but a city fight version of Warhammer might be interesting.

One big advantage of the Dragonshire buildings is that they are designed to be taken apart so that you can see, and place models inside. 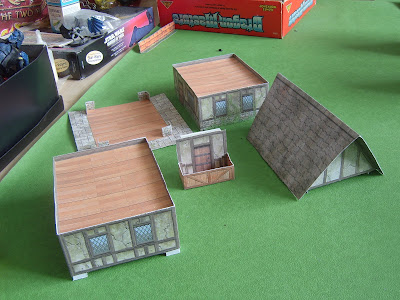 The building divides into a base, roof and two floors. In this example there is also a balcony that hangs from one wall. The tabs on the base and just visible under the second floor hold each level in place making the easy to disassemble but still strong enough to hold together. Models can smash their way in and out of houses and even fight on roof tops thanks to some useful stands that balance on the roofs and provided models with much needed stability.

Unfortunately none of this is as cheap as you might expect. The set itself was a bargain, but you have to add the cost of glue, card, paper and, most importantly, printer ink. I have gone through three colour cartridges already and each building uses about five sheets of card. Of course if these were plastic Games Workshop buildings each one would have set me back £15 at least and the whole layout would have had to be be painted as well, so in the long run this is probably much cheaper. Just not quite as cheap as it first appears.

Hopefully more pictures when the whole thing is finished.
1 comment: