Kings of War Kickstarter - the end and a review

My final Mantic Games Kings of War Kickstarter box has arrived, leaving me in a position to evaluate the campaign as a whole. I haven't opened everything or assembled anything yet so I am in a better position to judge some things rather than better than others, but my current position is summarised below.

Very Good
Gargoyles
Trolls (I know some people don't like the stumpy legs, but I like my Trolls to look odd an misshapen)
Ogres
Obsidian Golems
Goblin Mincer
The heroes, with one notable exception
Goblin Fleabag Riders 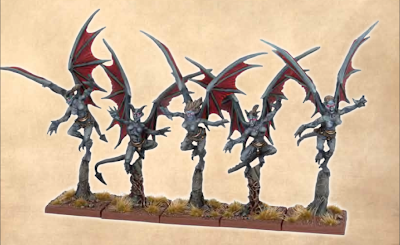 Good
Elf Palace Guard
Mummies
Cat Cavalry
Abyssal Dwarf Infernal Guard
Orc Chariot/Fight Wagon
Werewolves (Unfairly maligned, in my opinion. Probably because of the sample paint job in which the furry areas and fleshy areas are painted in different colours. Painted in one unified colour they look much better) 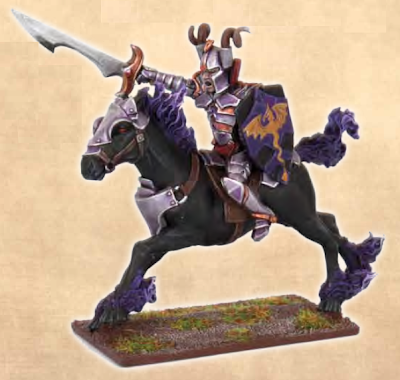 Is that supposed to be a rocking horse?

The Basilean Men-At-Arms are not good, to put it mildly. There's been a lot of criticism of the faces, which look a bit wrong, but to my eye they just look ugly. That's not necessarily a problem, in an army full of shining paladins, warrior nuns and angels, making the rank and file look a bit lumpen seems fair enough.

But there's a lot more wrong, both in sculpting and production. The arms and legs look too long for the bodies. On the face of it this is a sculpting problem, but it could be that they were sculpted for resin plastic, which shrinks a lot more in production than hard plastic. If that's the case, the conversion process for hard plastic hasn't been done very well. Then there's the plastic itself, which looks cheap and shiny and tends to obscure detail, particularly on the chainmail. And then there's hands and weapons are separate components, which means they don't look like they have a proper grip on their weapons. On the positive side, the weapons are very nice pieces that will be useful as spare parts.

Beyond sculpting and production, there seem have been problems at the concept stage. We get five bodies, one running, two advancing, one standing and fighting and one stock still. This makes it impossible to assemble a single box into a regiment that looks coherent. Mantic haven't bothered, their sample units use either the standing and advancing or the fighting and running bodies. Also, other than the weapons, we get no spare parts. There's enough for five models with nothing left over, which, frankly, feels a bit stingy.

The final, and most egregious, problem is that they're just too big. They stand taller than Games Workshop's Empire soldiers, while most of Mantic's models are smaller and less 'heroically' scaled.

Compared to Mantic's early plastics these are very poor. There earliest, the Elves and Skeltons combined good detail, casting and a wealth of extra pieces. They weren't quite at Games Workshop's standards but more than justified the price. Later sets, the Dwarfs and Orcs reduced the number of figures and parts, but were still well cast. The casting quality of the goblins is, to be generous, variable (and to be less generous, crap), but at least the sculpting was good.

Until the goblins, Mantic always used Renedra. I'm not sure why they stopped, if it was an issue of cost, time, Renedra are, apparently, snowed under with work from Warlord, Perry and Gripping Beast among others and responsible for much of the wargaming industries non-Games Workshop plastic, or something else. But Mantic's post-Renedra efforts haven't been promising, and leave me slightly worried about Deadzone and its plastic buildings. I don't blame Mantic for sending a team out to China.

Mantic do seem to have noticed the problems, even if they're are not quite acknowledging them openly. The final overview update to the Kickstarter from Ronnie Renton includes this rather telling paragraph:


We used a new process from the one with which we made Goblin plastic sprue, and I think the Men at arms are a big step up in quality from those. While I think they meet the reasonable price for a good number of army figures, I am still not happy that these are at the level I want to see our hard plastic figures. We are still working on this. Until we can find a method that takes the details back to those we have had in the past we will not stop. Every time we learn more and we get better, but we are not there yet, and I thank you for your patience.

Translated from marketing speak, I think that reads "our Men-at-Arms were crap, we don't want to make that mistake again."

Given that Mantic started off trying to compete with Games Workshop producing hard plastic, fantasy miniatures, it's troubling that this is the area where they appear to be struggling. On the plus side, the resin-plastic models have generally improved over time and their prices still give Games Workshop a run for their money, particularly when you take advantage of the larger horde and army boxes.

Moving rapidly to a tangent, this is the first Kickstarter I have seen through to the end, so what can we learn about Kickstarter (and crowd-funding in general) from it?

I have written before about how the relationship between wargames companies and their customers can be weirdly personal and how this can be both a blessing and a curse for both parties. Kickstarter intensifies this relationship.

Backers or Pledgers (not customers note) have to offer money for a product largely sight unseen, which may never be delivered based, substantially, on the company's prior reputation. In return they get a bundle of freebies, exclusives, the promise of getting things before anyone else and a sense of personal involvement with the company thanks to some direct communication. Mantic, in particular, have been very good at communication, responding to comments and incorporating requests into their plan.

The drawback is the sense of entitlement this breeds. Pledgers feel special and that means they expect special treatment and woe betide the company that does something to upset that. Delays rapidly lead to grumbling and Mantic found themselves the subject of serious hostility with their Dreadball Kickstarter when a few copies of the game found their way into the shops before all pledgers had gotten their copies.

Speaking of delays, the other problem with Kickstarter seems to be an obsession with delivery dates. Much of the complaints surrounding Kickstarter in general relate to delays and slipped delivery dates. It's not surprising, Kickstarter already feels less real and concrete than a proper purchase and it feels like a short step from delayed shipment to no shipment to company skipped town with all your money. The consequence is that many companies are obsessed with not missing their deadlines.

Ronnie Renton referred to CNN's article listing Mantic as a successful Kickstarter as a proud moment. But it's significant that this article is all about delivering on time. Part of Mantic's delivery slipped back to August and they felt the need to add extra models to the earlier shipment by way of compensation.

If you look at my list above, its worth noting that its the Bassileans who are slipping into the Okay and Flawed categories and the worst of the bunch is also Bassilean. I wonder if this was because they were rushed out to meet a deadline and suffered as a consequence. The men-at-arms really aren't good enough and, given more time, might Mantic have gone back to the drawing board? I don't know, but I can't imagine rushing is good for the models or for customer satisfaction.

As crowd funding matures, and feels a bit less ephemeral, maybe the focus will shift. Backers may stop worrying about whether their rewards will show up at all, and more about what  state their in when they arrive.

On the other hand, given how strongly gamers can feel about games companies, and given how a Kickstarter tends to intensify those feelings, if gamers find more to complain about than just delivery dates, we could end up with a very bitter and angry community.
No comments:

At the Battle of Cannae, the Carthaginian general Hannibal (the guy with the Elephants) successfully defeated a numerically superior Roman army, by spreading out his line and attacking both flanks of the Roman army, enveloping it and restricting its ability to bring its number to bear.

It is regarded as one of the greatest tactical feats of antiquity and one of the greatest defeats of Rome. In fact, the defeat was so total that the Romans refused to engage him in open battle again. Forcing Hannibal into siege warfare for which he was ill-equipped.

So, if you wanted to wargame this battle how would you go about it?

The problem is that, at the time, Hannibal's tactics were unexpected. The Roman commander Varro, was impatient and arrogant, engaged too quickly and fell into Hannibal's trap. But a modern wargamer knows exactly what to expect from the Carthaginians, and wouldn't be stupid enough to let history repeat itself.

You could introduce rules requiring the Romans to deploy and engage as they did historically. Or at least to limit the tactical options. But then why re-fight the battle if both sides are forced into repeating the same behaviour.

Alternatively, both sides could be allowed to deploy and engage freely. But this puts the Carthaginian player at a significant disadvantage. One of the reasons Hannibal's triumph is so famous is that it was an against-the-odds victory against a numerically superior foe. Unfortunately, most wargamers are not Hannibal.

The above illustrates the difficulty of reworking historical battles into wargame scenarios. Many a great battle was won because of incompetence of one side, the extreme skill of another or just plain luck. All elements that are hard to rework into an interesting game for both sides (I don't think anyone's in favour of pitching incompetent players against skilled ones just for a laugh).

One interesting approach, might be to let a games master run the scenario, without the players knowing which battle they are re-fighting. Hand both players the resources of the generals and see how it develops. Of course, this doesn't help to resolve imbalances, like the Romans greater numbers at Cannae.

In the end, not all great battles make for great games.
No comments: