Games Workshop's annual price increase has just gone by, an event now so routine that Jake Thornton over a Quirkworthy has dedicated a post to noting that even the complaining has become somewhat repetitive.

It's certainly true that every year there will be a fresh crop of protests, a certain amount of outrage and some people will insist that this is the last straw and they are finally done with the Evil Empire for good, some of whom actually will be. Amongst all this general grumbling, apparently wiser heads will point out that the only way to protest is by taking your business elsewhere. It's a theoretically sound argument, the problem is that it doesn't quite work.

Games Workshop's target market is somewhat different than most other wargaming companies. The focus is on 12-16 year olds, 10-18 at the outside, who are just starting out with wargaming, do not come from a gaming background and have no knowledge of any other gaming companies. Ideally, their parents will be financially well-off and indulgent, but if not a fair bit of mileage can be had from persuading them to part with every last penny of their disposable income in a desperate bid to compete with better resourced teenagers.

These teenagers will be milked for all they are worth for a few years until one of two things happens, either they grow out of wargaming entirely or they discover that Games Workshop is not the only player in the game. When this happens, they may stick with GW to a lesser extent or abandon it entirely. In practice, Games Workshop would prefer it were the latter.

Games Workshop does not see itself in competition with other wargaming companies. This is partly sheer arrogance, but mostly that their target market doesn't know about them, or at least doesn't see them as part of the same industry. Games Workshop sees their competition as Playstations, Pokemon and trainers, not Privateer Press and Mantic. Once their players learn about other games GW is done with them.

It's a slightly odd strategy that is essentially based on exploiting a monopoly position that the company does not in fact possess. They maintain the illusion of being the only game in town when this is not in fact the case. This strategy works well in the UK where Games Workshop maintains a high street presence, while independent Game shops are decreasingly few and far between.

This means that Games Workshop is at best dis-interested and at worst actively hostile to the more adult elements of the hobby. Independent conventions, websites and forums are at best tolerated and at worst shunned. They need to maintain clear blue water between their core market and other gamers. Hence the final end of Warhammer Historical just recently, a venture that opened up Games Workshop players to a wider wargaming world.

This is not to say this is true of all Games Workshop staff, many of whom play a number of different games, but this is essentially the attitude of the company.

If you really want to hurt Games Workshop, the way to do it is not to walk away but to target their core demographic. My little brother is 16 and arguably right at the heart of the Games Workshop market. But he has been exposed to a 32 year old who drags him to conventions. The upshot of this is that he is now building an Empire Army from Perry miniatures War of the Roses figures and a Norse army from Gripping Beast Vikings. If the core GW market found out about the cheaper and, arguably, better alternatives, their sales would drop fast.

So if you want to hurt Games Workshop try persuading a group of 12-14 year-olds to try a new game. Or just talk about one in their presence and let them find out. Alternatively, you could just walk away from Games Workshop. This is perfectly valid reaction, if they won't sell a product you want at a price you are willing to pay. Just don't expect them to shed a tear.
4 comments:

Hello again. It has been a while hasn't it? I'm sorry I haven't dropped in more, I certainly intended to keep up posting during my little sojourn with a certain popular UK reality TV show, but somehow it all slipped away from me. It seems that one blog at a time is just about my limit. Nevertheless, it was a useful exercise as it kept me writing to a weekly schedule.

Anyway, although this blog has been inactive, my wargaming hobby stuff has most certainly not been. I still have big things planned of which more information in due course, but in the meantime I thought it was worth posting a catchup of the things I have been up to. And, once again, I have flitted my way to a new project like an old lady distracted by a ball of brightly coloured wool (I assume).

For the last couple of months I have been hard at work on Games Workshop's Inquisitor. For those who do not know, this is Games Workshop's 54mm scale skirmish game set in the Warhammer 40,000 universe and focused on the shadowy Inquisition, a secretive of organisation of operatives and nutters dedicated to fighting aliens, daemons, witches and just about anyone else they don't like the look off (kind of like the United States armed forces, but more effective).

Inquisitor is one of those games that Games Workshop introduced, promoted like crazy, grew bored of, shoved off into the Fanatic department and then tucked away in a little ghetto within their website and tried to pretend didn't exist when Fanatic was downsized. As a consequence, not all of the models are available anymore and the support for the game is now non-existent. On the plus side, the price of the models has not dramatically increased over the years, models that once cost £12 or £15 in 2002, now cost £18.50 which by Games Workshop standards is hardly an increase at all. And GW haven't bothered to recast them in horrible semi-melty resin stuff with air bubbles and mould lines all over it (also called Finecast, fine in the same sense as Tesco Finest range I suspect).

Inquisitor was one of those games that got away. I had the rules and a few of the models in various states of assembly and painting but hadn't gotten around to much more. But at Salute 2012 I was inspired by this model. 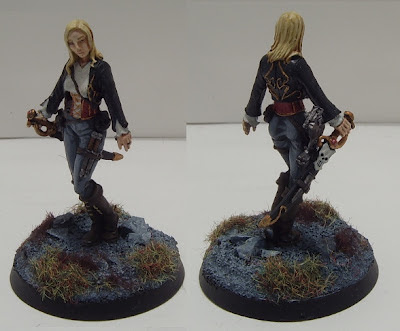 Originally Lady Gregorian sculpted by Steve Buddle and available from Model Display Products. I had to have this model and because of a weird mental tick that requires me to only buy models for theoretical use in games, I turned to Inquisitor where she makes a rather lovely Rogue Trader.

While I was there, I also picked up this model from Magister Militum. He started out as a 28mm scale giant Ape, but with a bit of conversion work became an Inquisitor scale Jokaero (alien apes with a fetish for technology, sort of a cross between Chewbacca and R2D2). 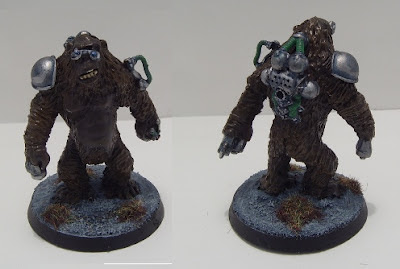 Once I got into it, building Inquisitor warbands turns out to be remarkably addictive. I have two warbands down and am working on a third, with a small band of Chaos Renegades to acts as antagonists planned. It is not unlike building Warbands of Realms of Chaos. Both games favour narrative over competition and are not concerned with rigid fairness or strictly equal forces.


Painting in this scale turned out to be easier than expected. It benefits from more subtle highlighting, but the detail has been easier to pick out and I am generally pretty happy with the results so far. Not had a chance for a game yet, I'm trying to get plenty of scenery painted up, but when I do I will post up some results. 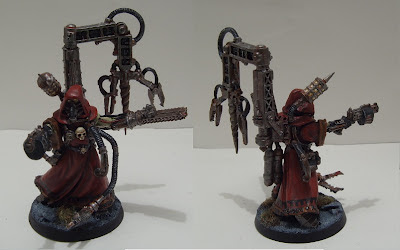 The Rogue Tech Priest Martel Cranch is probably my favourite Inquisitor model. The Servo arm on his back was a big conversion made from parts of an old Ork Mega Gargant from Epic. The model needed a lot of pinning to stay together, in fact the only part of him not pinned in his head. 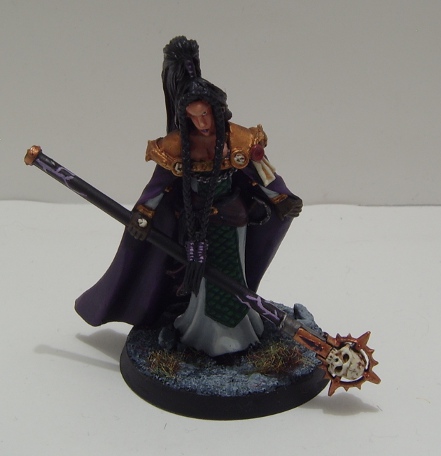 If you're interested in reading more about the rules and background of my Inquisitor characters, I have been posting on the Conclave forums:

I also have a few more pictures in these posts: