A gesture or other action used to display respect

So Salute, probably the UK's biggest wargaming convention not run by Games Workshop, has been and gone a few weeks now, which gives me enough time to reflect on it (or alternatively I've been too lazy and disorganised to write this until now). It's a strange beast of a convention, larger than almost any other and yet oddly specialised and lacking elements of the others.

Let us take a look at the venue since 2006, the Excel centre in the heart of London's regeneration zone, spitting distance from Canary Wharf, where high finance feasted on the corpse of the old working class. It is essentially a huge empty space in which things happen. It has no character of its own, but imports it through the events it hosts. So while other conventions occupy schools, hotels and leisure centres and somehow take on some of the character of the locations into themselves, Salute takes place in a characterless void. Which is not to say it has no character of its own, simply that what it has it has to bring with it, giving us the purest vision of the character of a wargames event, uninfluenced by anything around it. 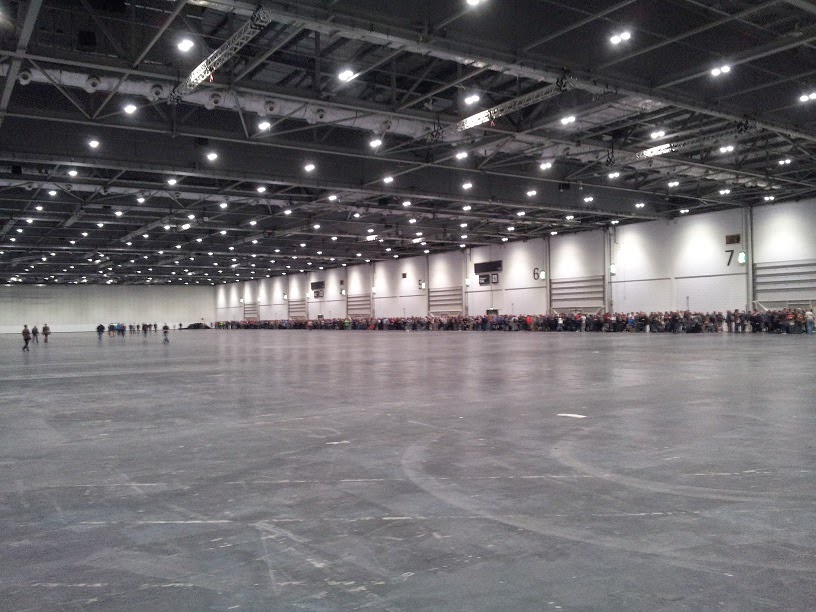 The queue is now big enough that it gets its own convention space, creating a kind of pre-convention, convention. Albeit a rather dull one.

Excel is also staggeringly vast. On the day of Salute it was simultaneously playing host to registration for the London Marathon, an event for property investors,* and some kind of baking convention. Given the overwhelming male bias towards wargaming and the lesser, but still existent, female bias in baking, I like to imagine the possibility of a husband and wife combination attending the same location on the same day for different conventions, meeting up at the end of the day and possibly for lunch. That the largest wargaming show can occupy only a small part of its venue says something about the nature of wargaming as a minority pursuit.

The Excel centre also provides convention attendees with a range of refreshments through booths arranged between conventions which, this year, included a pop-up restaurant. An apt inclusion given that Salute is, in essence, a pop-up wargaming superstore that trades for only one day each year. This is why it amused me to see a Salute guide posted on the Miniature Page that suggested arriving late to avoid the queues and to go to the gaming table while everyone else is buying. As if gaming is the primary purpose of Salute. 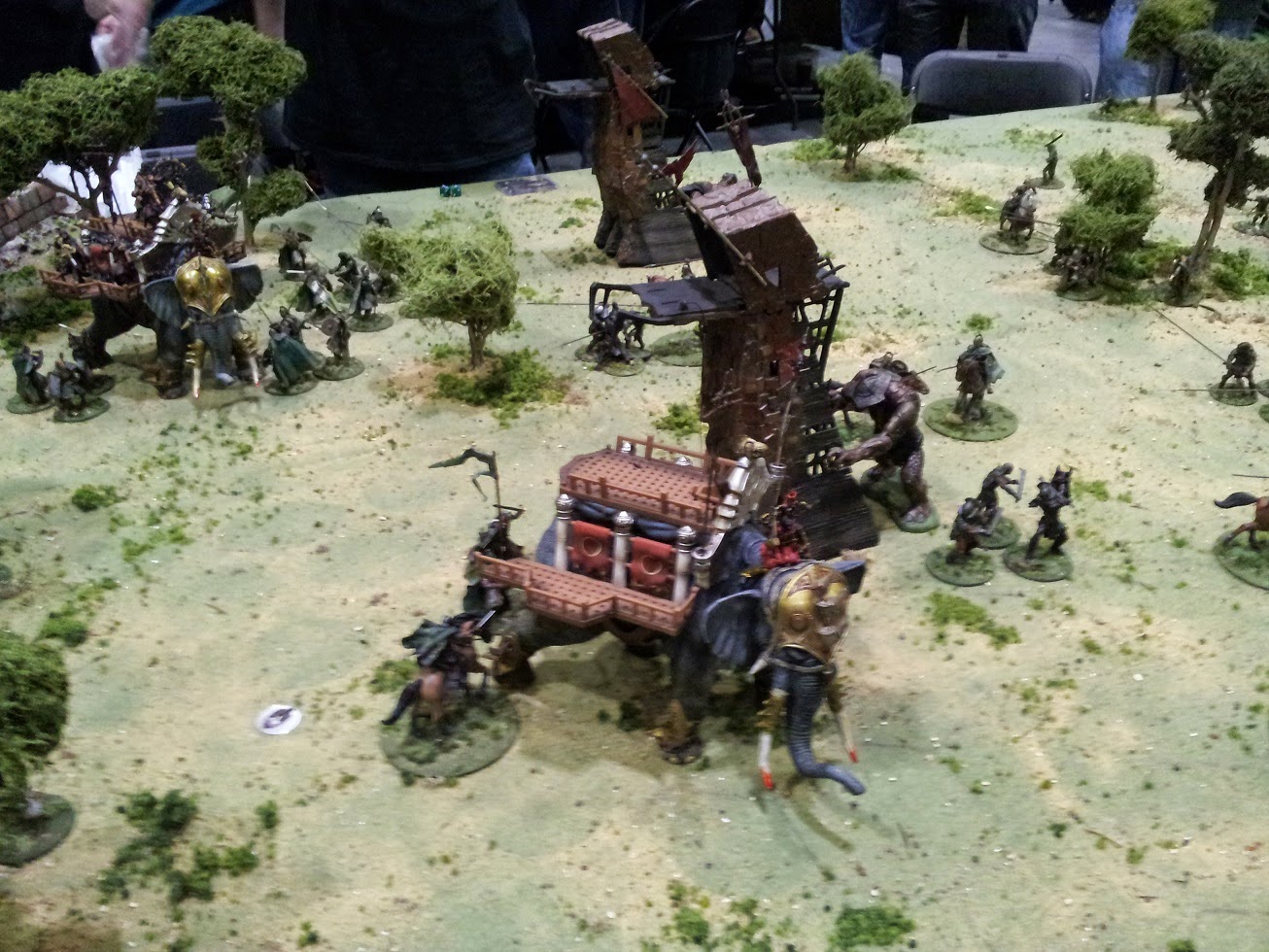 Lord of the Rings played with large scale figures. Achievable for most gamers in a smaller scale

Which isn't to say that the gaming isn't important. It is. But it's role is similar to that of the open tables in Games Workshop stores, to make the hobby manifest. Wargaming is a hobby that offers much more than it initially supplies, relying on its enthusiasts to add much of the value to the component parts supplied. The games show us what the hobby can be. The simpler games show us what we can do, the more complex, something to aspire to. Without them, we are simply buying lumps of metal and plastic (and the odd nicely decorated rulebook). There are no tournaments at Salute, so all games are a form of demonstration, even if its a demonstration you can interact with. 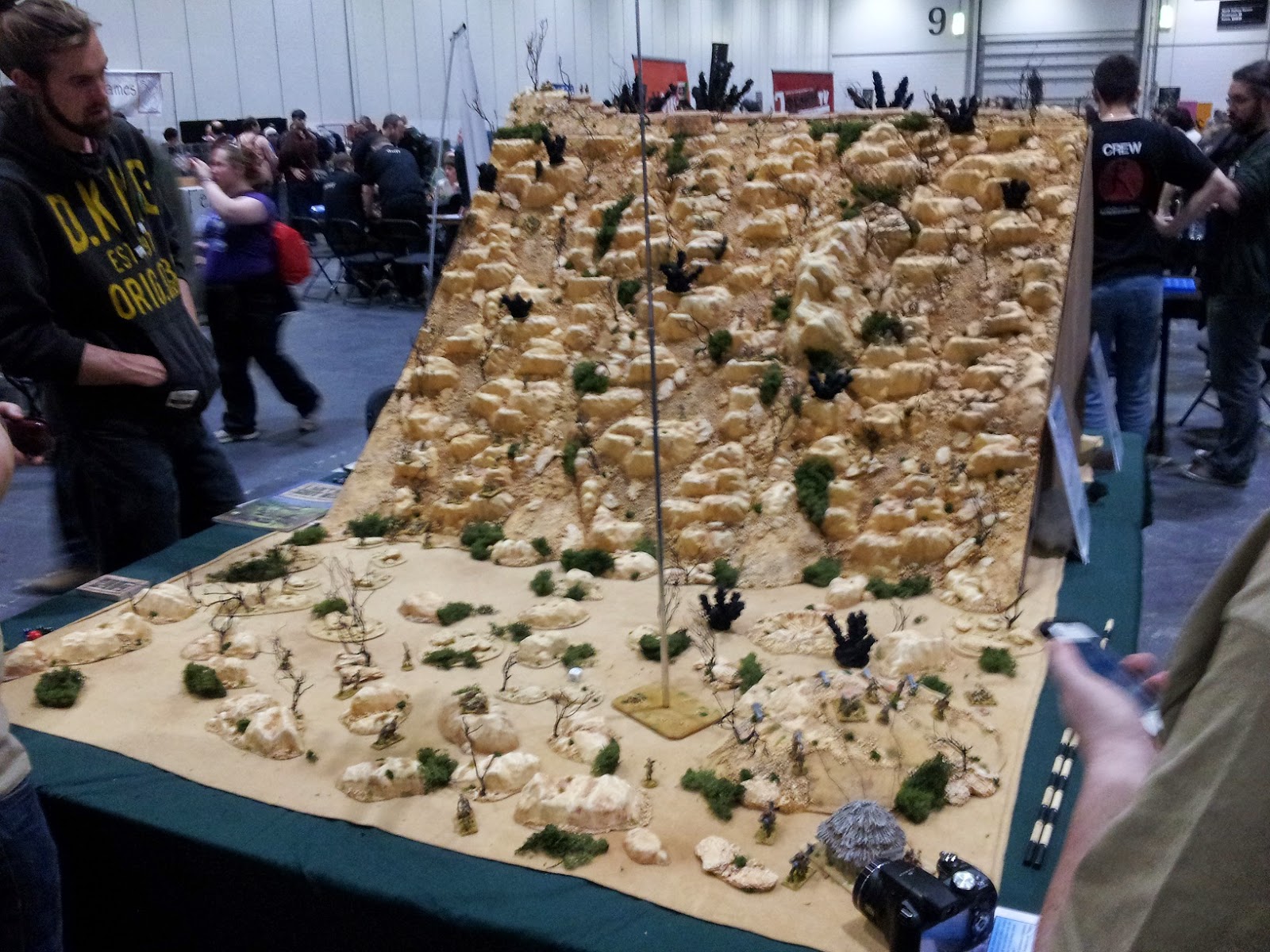 Most gamers probable couldn't or wouldn't do this

So what is the appeal of Salute if it is, essentially, a huge shop with highly restrictive opening hours and a charge to step through the door? In the Internet age there is nothing at Salute that can't be had with a few minutes web-searching and a few days or weeks wait by the letter box. What's lost in postage, is regained in not paying for tickets or train fairs. And yet, even as I cut down on the amount I spend at other shows, I still strain my budget to take us much as I can to Salute and come home with a bag bulging at the seems with new metal and plastic bits. Why is this? 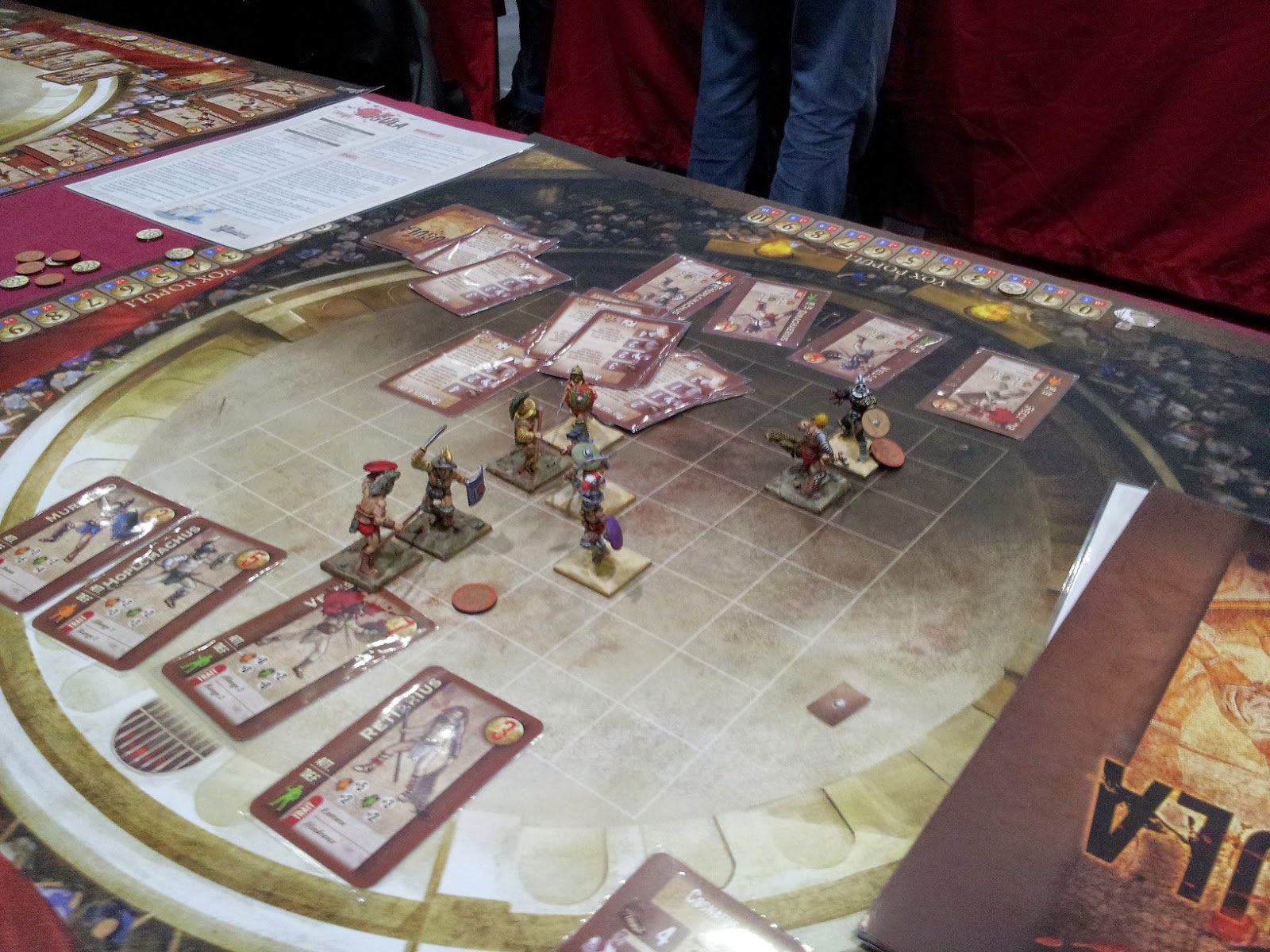 Wargaming is fundamentally tactile. Its minority enthusiasts a hold out who still insist that their gaming experience must be actual and not simply digital. Given the hobby's origins, how could a virtual shopping experience satisfy? Of course we use online stores, the opportunity is too good, but at heart we will always want a physical experience of shopping, one that excites with the physical possibilities of our hobby before we have paid any money. And that is what Salute offers, for one day of the year

*There's a glorious juxtaposition here between an event for people who expend a considerable physical effort for the benefit of others and a sense of personal satisfaction and one for people who intend to make money off the back of a necessity without contributing any real value to it.
2 comments: