Do not forsake me...

It's been way too long since my last update. I managed to miss a whole month. On the positive side, I do have something positive to report. I have one more unit painted, which puts me one step closer (and probably only one step away) from finishing my Siege Campaign.

Without further ado, here are my unit of Chaos Forsaken. 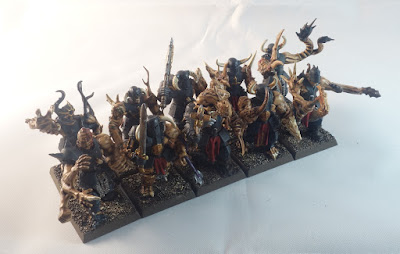 I'd had my eye on the Forsaken for a while and the combination of the Siege Final Assault (which needs a lot of infantry) and Games Workshop putting them out of production, prompted me to grab a box. 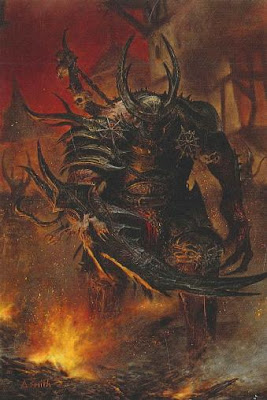 There are basically two ways to illustrate Chaos Warriors well. The first is as frothing mad-men, all violent energy, the other is dark and brooding menace, a slow and unstoppable horde. Adrian Smith definitely favours the latter approach and its very visible here. He's huge and threatening, but its all potential energy as he lumbers towards you. The models tried for that, but don't pull if off. 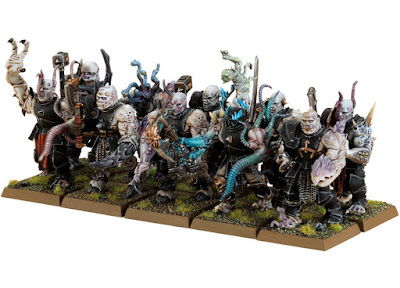 Part of the problem is the choice of heads. Some are just plain bad, all lumpy and odd, without being threatening, while others just seem inappropriate, looking too intelligent. In most cases, they aren't wearing helmets, which is a bad idea. The point of putting a Chaos Warrior in a helmet is to make them mysterious, you don't know what horrors lurk beneath. We know what horrors lurk beneath the Forsaken's helmets, and it's mostly scales and bumps.

The other problem is the posing. Low energy is fine. The Forsaken in the illustration is stalking slowly, his arms are relaxed. The problem with the models is that the arms are mostly half raised. When their holding weapons it looks like there on parade, when their unarmed like their in a boxing match,

When I put my Forsaken together I swapped almost all of the heads for spare helmeted Chaos Warrior heads. I took the best of the arms from the box and added some spare parts from Chaos Spawn and Chaos Knights to try give them a more dynamic look.

I didn't like the way Games Workshop had painted the models. The very pale flesh contrasted too strongly with the black armour and the occasional splashes of colour stood out too much. I tried to give my forsaken a more earthy look, sticking with the colour scheme from my Chaos Warriors and keeping the flesh tones dark, I used a few colour splashes for contrast, but tried to keep them subdued. The colour splashes were mostly painted using glazes and am quite pleased with the results.

My Forsaken are not nearly as professionally painted as the official models, but I think the unit looks better and more coherent as a whole.

Just as a quick bonus, here's my Dwarf Organ Gun that I painted a few weeks back. Not much to tell here, I have it sitting around unassembled for ages and thought it would probably be useful in a siege. I followed my Dwarf armies existing colour scheme pretty exactly. 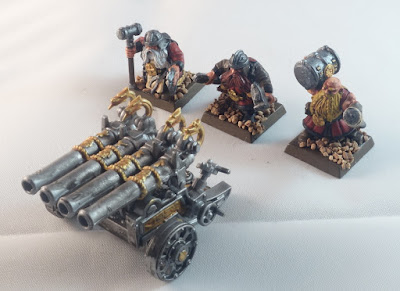 It shouldn't be too long until the Final Assault. Just some siege equipment to paint.
1 comment: