Shadow War - The Good, the Bad and the Atrocious

I've gotten a bit behind with my Shadow War updates. I've been playing the games, but not finding the time to post about them. So here are three quick reports in succession. 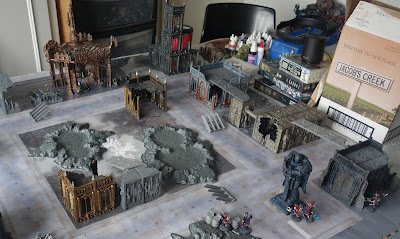 The first game, which was also the last game of the second round saw the Dark Eldar Wyches take on the Blood Axe Orks in a straight forward Kill Team fight over a relatively open field. Nevertheless, the Ork Spanner Boy Snagrip was able to get into position on top of the Promethium Tower and spent most of the game peppering the Dark Eldar with fire. 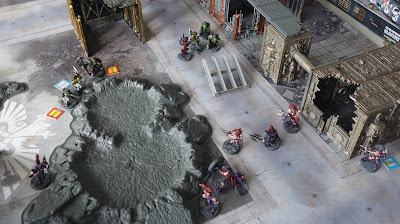 Despite this, the Dark Eldar were able to advance and actually make into combat, only to discover that the Orks were more than capable of holding their own 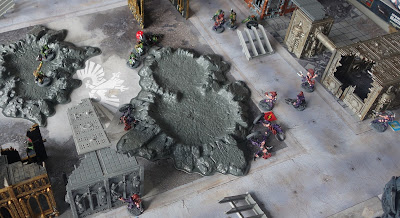 With most of the Dark Eldar, including their leader Cyrix, down or out of action, the battle hinged on a close quarter melee. 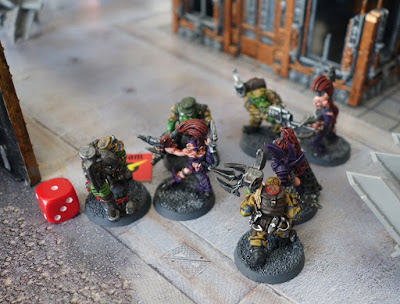 But with the fight having bogged down into a war of attrition, the Orks had the upper hand. The Dark Eldar bottled involuntarily with a roll of 10. Giving the Orks their second victory and 3 data caches, and the Dark Eldar their second loss. 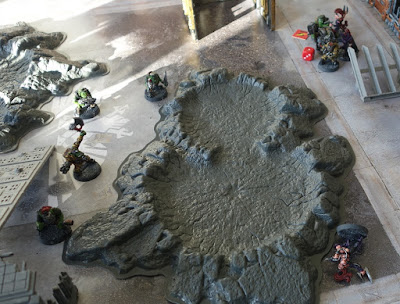 With this game over, round 2 was complete, all six Kill-Teams had fought two games apiece. At the end of the round, the results stood like this:


At the end of round 2 I randomly determined who would be fighting who. It's still early enough in the campaign that I didn't want to see any repeated match ups, so I re-rolled until I got a completely fresh set. 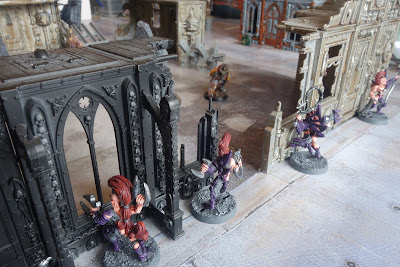 For the first fight of Round 3, perennial losers the Dark Eldar and Chaos Space Marines ending up fighting each other, meaning one would come away with a victory. The Dark Eldar ended up as the Attackers in the Raid mission, requiring them to sneak into enemy territory, destroy the hidden stash and get out again. The mission started well, with the Dark Eldar sneaking up on the sentries undetected.

Unfortunately, once they were spotted, reinforcements arrived quickly and the Dark Eldar found themselves under heavy fire again. 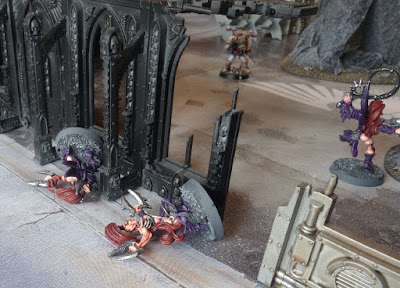 Despite this, they were able to eliminate the sentries and reach and destroy their target. 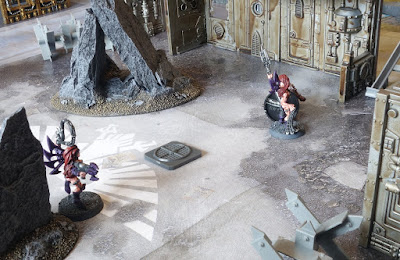 But the Plague Marines fought back hard, surrounding the Dark Eldar and leaving them hopelessly outgunned. 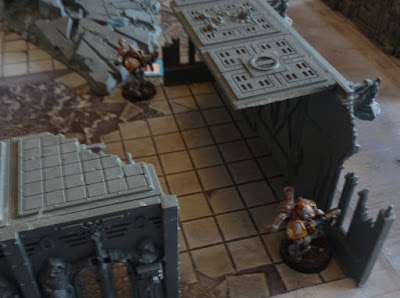 With all his comrades eliminated and no obvious route of escape, the Dark Eldar Styx was forced to bottle. 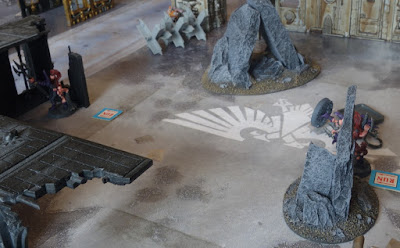 The Dark Eldar had achieved half of their goal, but it was still a loss. The Plague Marines achieved their first victory and 3 data caches, but it didn't go all their way as they suffered the first death of the game when Brother Reapus died from his injuries. The Plague Marines took advantage of a 100 credit bonus, thanks to the "Hidden Cache" random event and recruited a second Specialist Gunner, Brother Rancid, while the Dark Eldar recruited a 10th Wych, Heskar.


Round 3 - Game 2 - Tau Pathfinders vs Sisters of Battle 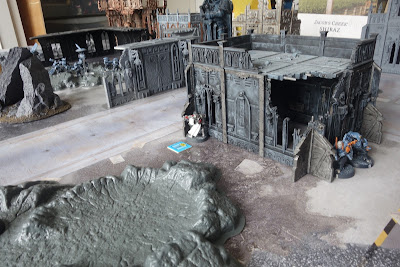 For the second fight of round 3, the Tau fought the Adeptus Sororitas. I was looking forward to this as the two shootiest teams would be taking each other on. I was hoping that the Sisters better armour, ballistic skill and range would match the Tau's higher strength and armour penetration.

I rolled the Ambush Scenario, putting the Tau on the defensive. Turnabout is fare play given what they had done to the Orks. And, as with the Orks, the Tau leader Tas'vou and one of his colleagues were able to ambush the ambushers.

Unfortunately, the dice were badly against the Sisters from the start. They scored a couple of early hits, but spent most of the first two turns missing on 2s. The worst possible outcome, given they could re-roll 1s thanks to the "Light of the Emperor roll." Then on turn 3, when they couldn't used it any more, they started rolling 1s. 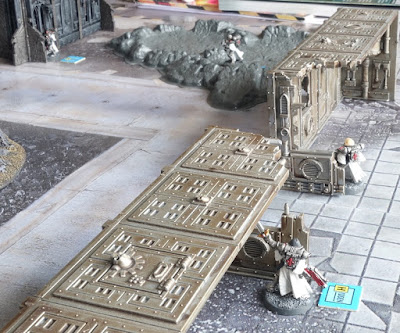 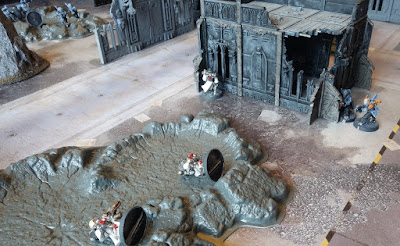 With the pressure relieved on the main body of the team, they were able to bring all their fire power to bare leaving most of the Sisters pinned. In the end, only 2 Sisters were actually down, but all the rest were pinned and Tau marker lights meant they couldn't rely on cover. To avoid a massacre, the Sisters had little choice but to bottle. 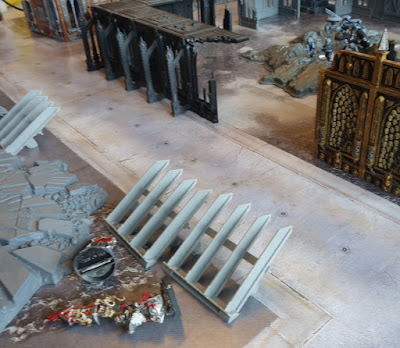 This was a pretty frustrating and disappointing game in which one side simply underperformed thanks to some quite unreasonably bad dice rolling. It had me half wanting to junk the entire result and play again, but it was getting late and I never like taking back results. In the end, both teams came away with 6 data caches and the Sisters didn't suffer too many serious injuries. They recruited another Sister, while the Tau, having reached their maximum number, upgraded their equipment.

I have one more game to play in this round, Blood Angel Scouts vs Blood Axe Orks. Hopefully this one will not be so one-sided.