So the Blood Angels are one half of Warhammer 40,000 Conquest, what about the other half?

When Games Workshop first released it's new Death Guard range I was in two minds. I had collected a Death Guard army before, back in Warhammer 40,000 4th edition (I used some of the models for my Shadow War Kill Team) and I have mixed new and old models in one army before, but I wasn't keen to do it again this time. One reason was that the old and new models are barely in the same scale. The new Death Guard have basically expanded to match the new Primaris marine and the old ones look pretty tiny next to them.

The other problem was the way I had painted the models. They were originally painted for a small campaign/tournament during a brief period in the early 2000s when I was a member of games club. I painted them very quickly using a method of dyrbrushing layers of grey over a brown undercoat. I was quite happy with the results, but there were two basic problems. Firstly, the results looked good from a distance, but look quite scrappy up close. The second was that I used yellow as a secondary colour, which has the odd effect of making the grey look purplish-blue, which was not at all the effect I was going for.

So I didn't want to add the new models to my old army, but I wasn't at all sure I wanted to start a brand new one. My little brother forced the issue a bit by buying me the Plague Brethren box for my birthday along with a box of the easy-to-build Plague Marines. But I set them to one side for a while, thinking I might use them as Plague Marines in another Chaos Marine army, possible Black Legion or Word Bearers.

But when Warhammer 40,000 Conquest came along and, particularly, when they sold off a Myphitic Blight Crawler for £7.99, I couldn't resist and took the plunge. When issue 12 of Conquest came with a Foul Blight Spawn I picked up two copies and used the first to test my new colour scheme. 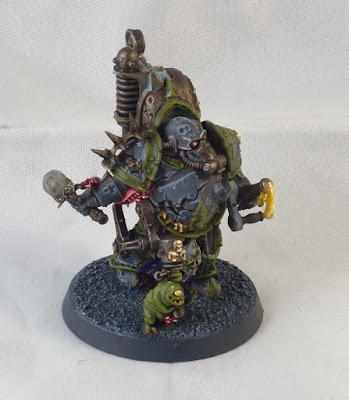 I wanted to stick with my grey-drybrushed-over-brown because I thought it came out well, but I wanted a different contrasting colour and a way to neaten up the overall effect.

I gave the Blightspawn and undercoat of Army Painter Leather Brown and then drybrushed Vallejo Dark Grey and Neutral Grey over it. I then did a lot of edge highlighting in light grey which, I think, helps to pick out the detail. The armour edges were painted in Death Guard green, given a wash with Athonian Camoshade and a highlight of Deathguard Green mixed with Vallejo Olive Green. The metal areas were painted in Vallejo Natural Steel with a two heavy washes of GW Agrax Earthshade to give it a tarnished, rusted look. Some other areas were painted with Vallejo Bronze, given a wash or Seraphim Sepia and then a touch of Vallejo Verdigris Glaze (which I think I applied too heavily on the Blightspawn).

I had 9 Plague Marines by this point: The Plague Brethren and two sets of Easy to Build Plague Marines. I thought about converting one of the easy to build, so I could build a squad of 7 all of whom were unique, but then I realised the multi-part Plague Marine box came with close combat weapons and I couldn't resist grabbing a box. I then mixed and matched models to get two squads of unique individuals.

This first squad is for medium range fire support and includes two Blight Launcher Marines, Four Bolters (one with an Icon) and a Champion with a Plasma Gun and Powerfist. They were painted substantially in the same way as the Blight Spawn, though the fleshy areas were painted with Vallejo Rosie Flesh, washed with Reikland Flesh shade and highlighted with a mix of Rosie Flesh and Elf Flesh.

The picture below is a step by step of the Champion. 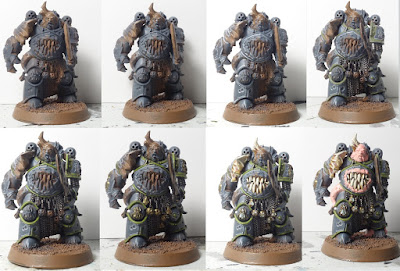 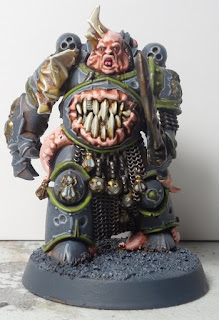 I found my drybrush, then edge highlight technique worked quite well on bone, which was handy as I always struggled to paint bone well. I used Privateer Press Menoth White Base and Menoth White Highlight, which I've had sitting around for years, along with a wash of Seraphim Sepia. 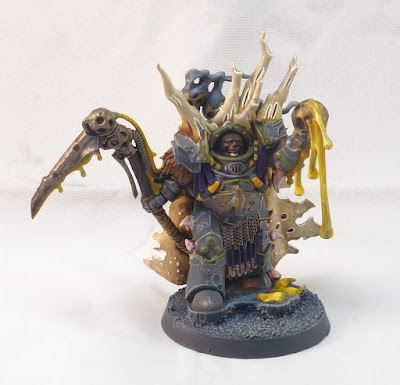 The Lord of Corruption came with Conquest Issue 19 and was my first official Character. I made the slime yellow on all my marines because I was already using green on the armour. I'm not sure if its snot or pus. 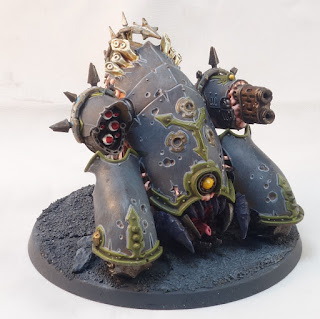 The Myphetic Blight Hauler uses the same techniques as the Marines, though the fleshy area at the back looks particularly bloated and gross in rosie flesh. 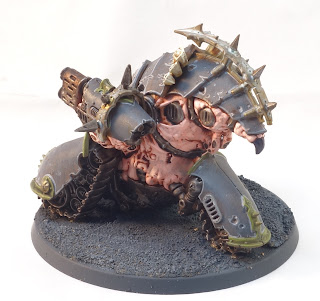 I painted my second squad of Plague Marines and my Biologus Putrifier at the same time. Using the same techniques as above though, by now, I think I was doing a better and more subtle job.

I'm particularly pleased with this squad. Five of them are from the multi-part Plague Marine box set, while the one with the Meltagun is one of the Plague Brethren and the one with the Bubotic Axe and Plague Knife is a conversion mixing parts from an easy to build marine with spare parts from the boxed set. This lot are a close combat squad, advancing as quickly as possible using assault weapons to provide support.

I badly wanted a Daemon Prince for my army. I had painted the official Nurgle Daemon Prince model for my old Death Guard army, but I wasn't keen to repaint him, include him in the new army in the old colour scheme or get a new version of the same model. Then I discovered that the Daemon Prince could be upgraded to have wings and hit on an idea.

I have seen a lot of Nurgle Daemon Princes that combine parts from a a Plague Drone with a Plastic Daemon Prince, but never one that went so far as to replace the legs to create a centauroid-fly hybrid. So I went on Ebay and got myself a drone. My original plan had been to get the Daemon Prince boxed set and use the upper body with just the bulbous lower torso and wings of the fly. But, having looked at the fly, I liked the idea of retaining its armoured carapace. So, I went back to Ebay and found someone selling the chest and arms of the Daemon Prince (along with some other random Daemon bits). 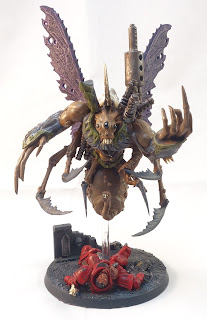 The finished Daemon Prince has the torso and arms of the Daemon Prince model attached to the front of the fly, which still has its wings. I also used one of the fly heads. The Cables come from a Defiler's Power Scourge. The organic chimney piece is part of a Tyranid bio-weapon while the trio of power coils are spare parts from old 40K buildings, while the large chimney on the back is actually from the very first plastic battlewagon model. I wanted the model to have a slightly steam punk feel, but the cables and other bits also help to fill the gaps. I have never been confident with green stuff. 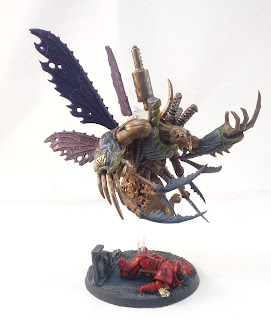 The dead Space Marine is the spare easy-to-build Marine from Issue One of Warhammer 40,000 Conquest spliced with Zombie parts. 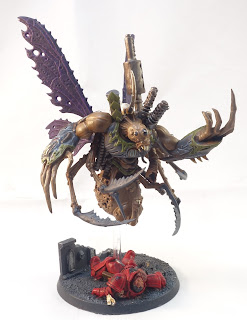 I stuck to the same colour scheme as the rest of the Marines, but left the unarmoured areas in Army Painter Leather Brown. I gave the whole thing a wash in Agrax Earthshade and then highlighted by mixing Vallejo Heavy Skintone with the Leather Brown.

That's it for now. I still have a fair bit more to paint, but I am taking a break to go back to my Blood Angels for the time being.
No comments:

I really should have learned by now that there is absolutely no point in trying to plan my projects ahead of time. I've gotten pretty good at seeing projects through to completion, but when it comes time to choose a new project it's going to be whatever feels most exciting at the time, no matter what I may have thought before hand.

After I got finished with my English Civil War companies, my Shadow War campaign was still underway*, but keeping the kill-teams up to date really didn't take much time, so I was at a loose end. At about that time Warhammer 40,000 Conquest came out.

For anyone not paying attention, Warhammer 40,000 Conquest is a weekly part work magazine published by Hachette Publishing under licence from Games Workshop. Over the course of the magazines run, you can collect two armies for 40K, Plague Marines and Space Marines, plus scenery, paints and brushes. The collection leans heavily on Games Workshops "easy-to-build" range as well the contents of the Dark Imperium boxed set.

I snapped up the first issue, because it was priced at a ridiculous £1.99 as introductory offer and came with three Primaris Space Marines, three pots of paint and a starter brush. I snapped up two copies, but didn't have any plans to do anything with them.

Having decided I didn't want to subscribe, I grabbed issue 2, because it was £4.99, but then ignored things until issue 6 when the £7.99 magazine came with a Primaris Librarian, a model for which Games Workshop charge £22.50.

I had enjoyed painting my Shadow War Scouts as Blood Angels and that prompted me to pick up the Blood Angels Primaris upgrade sprue. Between the sprue and some chopping and repositioning I was able to put together a five man Blood Angel Primaris Squad, who I quickly set about painting.

I haven't had much success paitning Space Marines over the years, so I was pleased with how these came out. I kept things simple, giving them an all over base coat of Mephiston Red, followed by a Carroburg Crimson ink wash and then a lot of edge highlighting. After that I just picked out some details using Abaddon Black (which came with Conquest issue 1) and highlighting that with Vallejo Black Grey and painting the metal areas in Vallejo Natural Steel with a Nuln Ink wash. 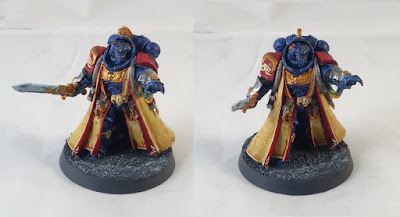 I gave my Librarian a little more time and attention. He also gave me a good opportunity to use my Macragge Blue and Retributor Amour (Gold) which also came with Conquest Issue 1. That £3.98 has already gone a long way.

By the time I had my Librarian finished, Issue 11, with its easy-to-build Agressors was out. I already had the appropriate Blood Angel Agressor shoulder pads (though I had to cut away the easy to build ones to make them fit), so I could hardly resist.

Three units down, four if I use my Shadow War Kill-Team. Of course Space Marines are not the only army available through Warhammer 40,000 Conquest, but more about that another time.

* It still is underway, but I don't really have anything left to paint for it. I'm planning a big finale game, but it will take a fair bit of time and space so I'm holding out for when I have a long weekend or something.
No comments: