Not much of an update today. Work is proceeding on my last two Ghar units, but I haven't gotten far enough to share any pictures.

Instead, I thought I'd share something from another blog that I have enjoyed. The Realms of Chaos 80's blog recently featured a blog post in which the author pledged to share more of other people's work and I thought I would take a leaf from the same book. Generally, I haven't bothered to share other blogs, because I haven't thought this blog was visited enough for it to have any effect. But, I'm happy for every view I get, and if I can pass on even one reader it's worth it.

Anyway, these two posts are game reports for the Pikeman's Lament rules. These are a Pike and Shot variant of the Medieval and Fantasy, Lion Rampant and Dragon Rampant rules. I have the rule book but haven't played them yet.

These two posts cover a half sized test game and a full sized game and featured Scot's Covenanters, Highlanders and Royalists during the English Civil War.

Tim, the author, clearly shares my taste for blow by blow accounts, with a bit of narrative and plenty of pictures. He also has a very nicely painted collection of models.

If you're at all interested in English Civil War gaming or the Pikeman's Lament rules, they are well worth a read.

For my latest Beyond the Gates of Antares battle I was going up to 1,000 points which meant I would be able to use my Concord Combat Drone for the first time since the introductory scenario. For this battle, I used the newly published PDF army lists available from Warlord's website. This didn't introduce many changes, but it did reduce the points cost of my Nu Hu Mandarin, allowing me to add my Combat Drone to my existing army list without making any other changes. I also gave it the self repair rule and a batter drone (which throws up a field making it harder to hit) as I imagined it would attract more than its fair share of attention.

Getting the Ghar up to a 1,000 points was a bit more tricky. I actually have plenty of models (though not all of them are painted) but because most Ghar squads cost so many points, its difficult to get to exactly the number you need. I added my newly painted Bomber Squad a fourth battle suit to one of my units. I also upgraded everything that could have them with Plasma Amplifiers. These had proved pretty useful last game and I was hoping they would be again here.

The only major change to the Ghar in the new army lists was that the Techtorists now count as probes, with a movement of 15". I'm not sure how I feel about this. It simplifies things, but means that they behave in a slightly unintuitive way, floating over obstacles. The big change is that they no longer count as infantry. If this rule had been in place last game, the Ghar would have lost.

I decided to play the "Return to Base Camp" scenario. This put a hill in the Centre of the table, surrounded by low obstacles (rocks in this case) to act as the base camp. Half the defending force (determined by order dice so the Command Crawler and Combat Drone count as 2) deploy on the hill with the rest making a command test to arrive from turn 2 onwards. The attacker gets to deploy their whole force at the start of the game. The winner would be whoever held the hill at the end of the game, assuming one side didn't break (lose more than half its order dice) first.

I decided to make the Ghar defenders this game as they had been the attackers in the last one. I deployed the Assault, Battle and Outcast squads first. I seriously considered deploying the Command Crawler, but with its 2 order dice it would have counted as 2 units on its own. Also, given the reserves would have to pass a Command Check with a negative modifier to arrive, the Command Crawler had the best chance of passing. If I kept the Outcasts in reserve, they might never show up.

The Concord got most of the early activations and moved into firing positions. The Combat Drone opened proceedings by firing on the Ghar Battle squad. It's Compression cannon made no impact, but it got in three hits with its plasma light support and the Ghar promptly failed two resilience tests on a 10. This was pretty disastrous so early in the game. 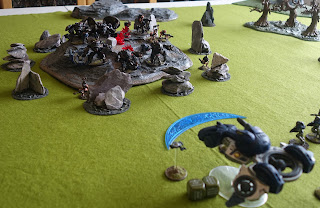 The rest of the turn's shooting was pretty unimpressive. With the Ghar battle suits behind obstacles, the Concord troopers plasma carbines couldn't even pin them, so they turned their attention to the Outcasts, and even the Tectorists who suffered some early casualties.

The Command Crawler and some of the Flitters arrived on turn 2. The Bomber squad failed its Command Check. The Combat Drone moved to intercept, which also put it too close to the Assault Squad for them to use their Gouger guns. The Command Crawler put a lot of pressure on the Concord, but didn't do much damage. Ghar shooting in general was frustrated by the Batter drone. 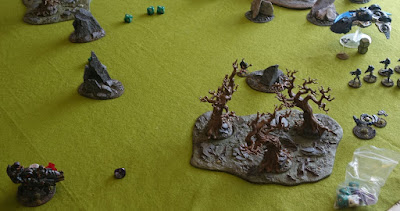 Turn 3 saw the Bomber Squad and the rest of the Flitters arrive and a lucky hit by the Command Crawler took out the Batter Drone. However, the Ghar suffered more bad luck when the Assault Squad leader was killed by a plasma lance, despite getting a re-roll. 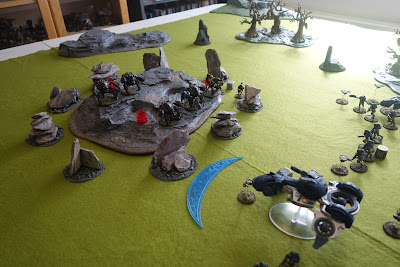 Over the following two turns, the Concord piled more pressure on the Ghar. The last two Battle suits were destroyed by the Combat and Medium Drones and the Outcasts succumbed to fire from the strike squads as did the last Tectorists. Finally, a concerted effort by all the Concord put enough pins on the Assault Squad to break it. 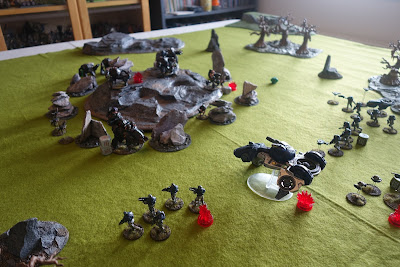 The Command Crawler fails to lead a counter-attack

By this point, the Bomber squad had made it to the hill and the Command Crawler had moved to the edge, though failing an agility test had slowed it down. The Concord had two options, to assault the hill in force or to try and break the Ghar army. The latter seemed easiest, 4 squads had been destroyed, if one more went, that would be enough. The best chance was the flitters. As the Concord had so many more order dice in the bag, it was hardly surprising that they were able to destroy four flitters before the Ghar could even activate. The last two fled, but they weren't able to get far enough away to escape the Medium and Combat drones.

The Ghar could still, theoretically win if they were able to break the Concord and still controlled the hill. This could have happened if the Command Crawler had managed to destroy the Combat Drone and another unit and the Bomber squad took out another. Sadly for the Ghar, this was not to be. The Bomber hit bang on target, but only rolled 1 hit and then did no damage, while the Command Crawler got nowhere. Victory went comfortably to the Concord. 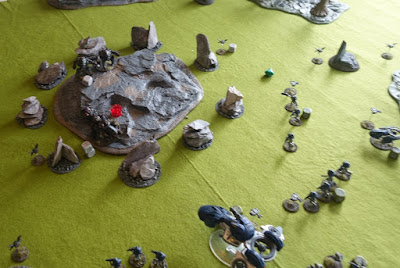 1. I have been playing the more unusual scenarios to try and stop the games becoming and unfocused brawl, but I'm not convinced this one works. It's significant that the section of the rulebook on setting up terrain says to avoid placing hills in the centre as the battle will turn into a fight for the hill. This scenario is explicitly a fight for the hill. The Ghar had no room to manoeuvre and the Concord essentially got into decent firing positions and had no reason to move.

2. I didn't play the Ghar very well. They had spectacular bad luck, losing 2 Battle suits on the first turn, but they would have benefited from being more focused. I ended up throwing away firepower on the Combat Drone, because I saw it as the biggest threat, but the Ghar had little chance of damaging it. It only occurred to me late in the game, that the Ghar could actually have tried to break the Concord force, instead of just trying to survive. If they had focused their attention on softer targets, picking off the Strike squads one at a time and moving on to the lighter drones, they would have has a much better chance.

3. Introducing the Combat Drone put the boot on the other foot for the Ghar. They are used to being heavily armoured, but are not good at busting through it. Their highest strike value, from the Scourer Cannons set on concentrated, was 4, enough to put pins on the drone but still only able to damage it on a 10.

4. The Flitters were literally useless this game, not once did their targetting rule work. I definitely prefer Tectorists,

5. Normally, I have Concord troopers fire on Ghar battle suits in standard mode, as this gives them a strike value of 2 and means they can pin Ghar without damaging them. In this game, thanks to the resilience boost of being behind an obstacle, that wouldn't work. This lead to me having one squad use rapid fire which gave them 2 shots each at strike value 0. The Ghar would still be damaged only on a 10, but with more shots and more hits this was much more likely to happen. The Concord got a bit lucky, hitting with 6 out of 8 shots, but doubling the number of shots still doubles the chance of rolling a 10. Something to remember for future games.

6. I have ridiculously bad luck with Plasma Amplifiers. I have used 6 over the course of 2 games and not one of them has lasted past the first turn of use, despite there being a 50/50 chance of this.

For the next game I'm going up to 1250 points, which is as high as I can go right now. I am thinking I might try a basic battle scenario playing for victory points.
No comments: