As you may have gathered from previous entries, I have a fair bit of time for Mantic games. I'm not as enamoured as some but I think, in general, they produce decent quality miniatures and affordable prices and are providing Games Workshop with some much needed competition. In fact, I'm confident enough in them to have shelled out some money to their recent Kickstarter project and a substantial quantity of Undead should be on its way soon.

Mantic have just published the Beta rules for version 2 of Warpath. The plan for Warpath appears to be essentially the same as the plan for Kings of War; release version 1 for free online or bundled with every decent sized box of models, take on board feedback and release a revised version 2 and then, about a year later release the final version 3 in hardback while keeping the basic rules free to download. So far so good. Warpath version 2 features a significant number of changes which has also prompted a re-jig of the army lists. This was good news to me for one reason in particular.

This is the contents of the Forge Father Drakkarim boxed set. 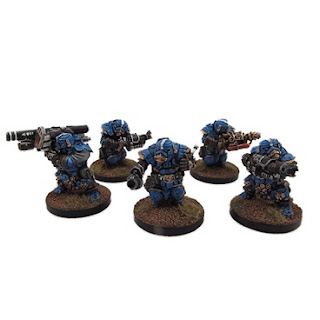 The Drakkarim are supposed to be close assault specialists. In version 1 of the Forge Father army list they have shorter range guns with a little more punch than the standard storm guard. The boxed set features a leader, two troopers with Drakkarim rifles, which look slightly different than the Stormguard rifles, one dragon breath flamethrower and one mjolnir rocket launcher.

This is the Drakkarim entry in version 1 of the Forge Father army list.

With Warpath version 2 out I assumed that this error would be corrected in some way.

This is the army list entry for a five member Drakkarim squad in Warpath version 2. 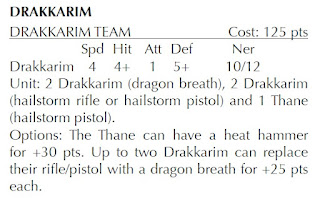 Note the continued absence of the Mjolnir Rocket launcher. Also note the requirement to include two Dragon Breaths. Note also that the boxed set includes only one Dragon Breath. Also note that the army list requires a ratio of two Dragon Breaths for every five Drakkarim and that the Dragon Breath model cannot be bought seperately (you can order a pack of five of the weapon, but as they only fit the metal bodies you may as well buy the box). Oh deary, deary me.

It isn't a disaster, the Steel Warriors can also include a Dragon Breath and, now that the Drakkarim rifles are considered to be the same as the Steel Warriors rifles, I intend to mix them in with my Steel Warriors to provide some much needed special weapon support. But, we still have a boxed set sold as a particular unit that it cannot possibly represent.

This is sloppy. It's the kind of stupid marketing I would have expected to see from Games Workshop in the early to mid 1990s (when they sold Eldar Aspect Warriors in packs of four despite the army list demanding they be used in squads of five). Mantic should be better than this and this sort of stupidity just looks unprofessional. Mantic looks like a company that needs to be closer attention to the little details.
No comments: