Kazad Kor was a small Dwarf hold to the east of the Karak Kadrin, of no great significance apart from its link to the dwarven underway. Lord Durak of the Irongrim clan claimed that it was an honour to guard the eastern edge of Karak Kadrin, but many of his retainers would have preferred the honour of guarding the city itself.

Thane Zoe "the Princess" Lord Durak's daughter was leading a routine patrol of the borders when she was suddenly approached by Borri, a young dwarf with good eyes. "Invaders, from the east, Chaos worshippers I think," he said. Thane Zoe considered for a moment, then sent a messenger pigeon back to the hold.

"Send the Thunderers ahead to hold the old fort at the pass. We'll join them as soon as we can. If we can hold the fort for us long as possible it will give father time to prepare."

The dwarfs said nothing, but picked up their gear and began to march.

The dwarfs had to hold one significant piece of scenery at the centre of the table (in this case a ruined fort) for four turns. If an unbroken dwarf unit was within 6" of the fort after four turns, the dwarfs would win. Anything else was a chaos victory. Because the dwarf objective was to hold out for four turns, I decided to count the turns down from 4 to 1 to increase the tension. 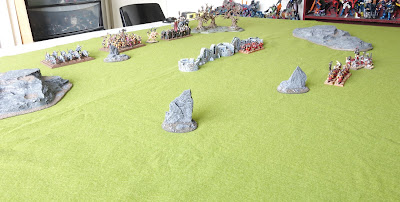 Facing the Chaos battle line. The Thunderers take position behind the wall, while everyone else must deploy at least 12" from it. The Chaos line from left to right: Warhounds, Marauders, Spawn, Chaos Warriors, Marauder Horsemen. 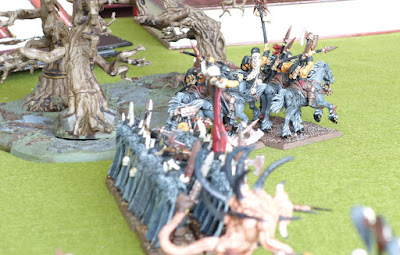 The Marauder Horsemen use their Vanguard move to manoeuvre around the forest, rather than risk a dangerous terrain test. 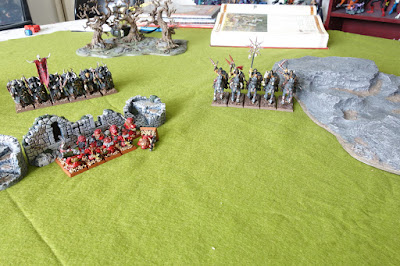 The Besiegers (i.e. Chaos) automatically get the first turn in this scenario. The Chaos Warriors decide not to risk charging the Thunderers, given that if they rolled low could end up not in combat and still be victims of a stand and shoot. The Marauder Horsemen throw their javelins, killing one dwarf. 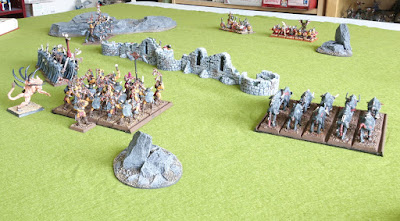 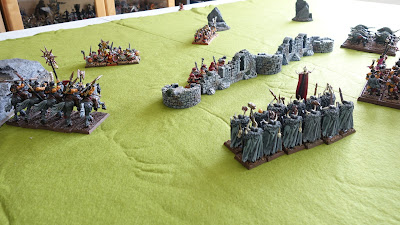 The Thunderers open fire on the Chaos Warriors but, thanks to some ghastly dice rolling, cause no casualties. The rest of the dwarfs advance as fast as their stumpy legs will carry them. 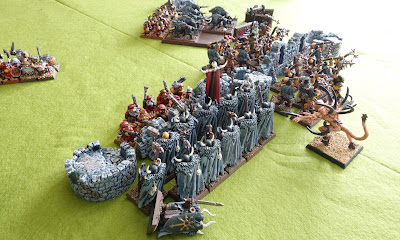 Meanwhile, on the Chaos right flank, the Chaos Hounds charge the Quarrellers only to lose three of their number to shooting and two more in the subsequent melee in exchange for only one dwarf. The Hounds flee, but the dwarfs hold position. 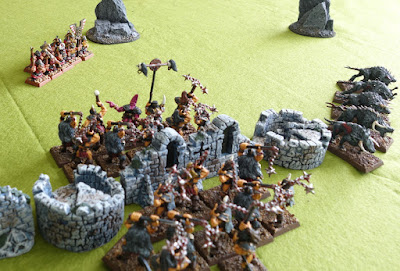 The Quarrellers decide against charging the Marauders in favour of the lower risk strategy of shooting. Two Marauders are killed.

The Chaos Warrior Champion issues a challenge to the Thane Zoe, but neither is able to get through their opponent's armour. In fact, there are no casualties at all. The Warriors win on points but the Longbeards easily pass their break test. 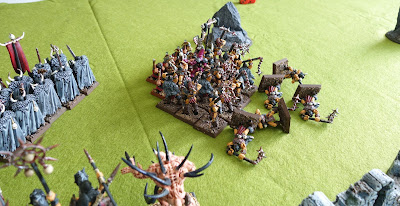 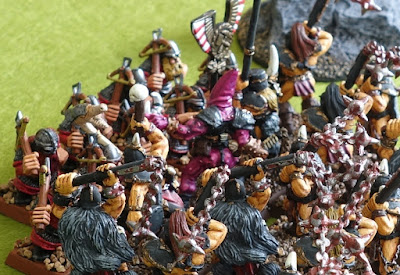 Chakram Manflay challenges the Dwarf Veteran. He accepts, but is cut down by the Exalted Champion, who is then rewarded by Slaanesh and gain iron skin. The Marauders win the combat and chase down the fleeing dwarfs, though this takes them a long way from the rest of the battle. 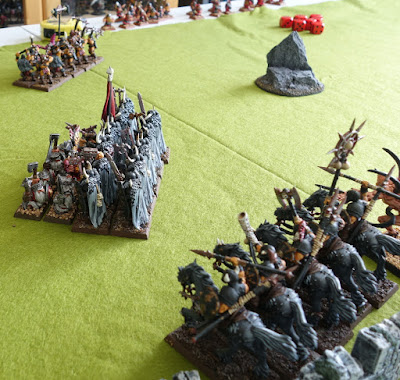 On the left flank, the Chaos Champion and the Dwarf Thane fight another pointless battle. Once again the dwarfs lose on points but pass their break test. 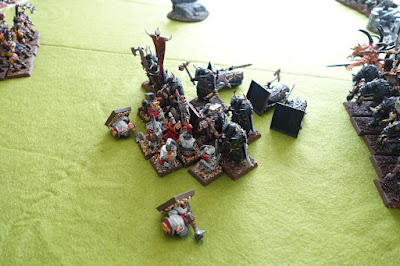 With only the Longbeards left, things look bleak for the Dwarfs. But they rise to the challenge. Thane Zoe finally kills the Chaos Champion and the Longbeards fell three more Warriors in exchange for only two of their own. The Warrior break and flee and the dwarfs pursue... 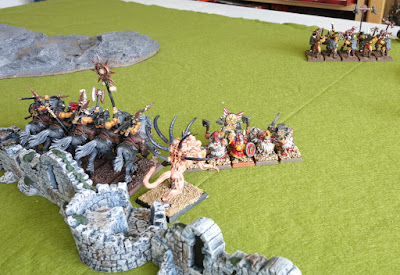 With Chakram Manflay and the Marauders half way across the battlefield and in no position to help, everything that can charge the Longbeards does. But the Longberads hold the line, killing all the Warhounds and three of their Marauder Horsemen including the Horsemaster. The remaining Horsemen break and flee, only for one of their number to fail a difficult terrain test crossing the wall. 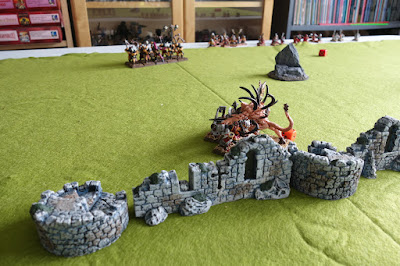 The Longbeards only have to hold out for this last turn. They Spawn kills 1 dwarf, but takes two wounds in exchange. The Spawn is unbreakable, but that doesn't matter. The Longbeards are unbroken and within 6" of wall and so claim victory in the first turn of the campaign.

That outcome was really unexpected. I thought the Dwarfs had had it when the Quarrelers were killed, but the Longbeards rose to the occasion as is only appropriate. On the other hand, the Dwarfs shooting, particularly the Thunderers, was pretty lousy all game, so all their luck came in the second half.

It's hard to see what else Chaos could have done. Perhaps, the Marauder should not have pursued the Quarrellers, but if they hadn't, they would almost certainly have rallied and been in a position to offer the Longbeards support in the final turn.

With the Dwarfs victorious, Chaos will lose D6 x 15 points in the final scenario.

After the battle, I decided that Chakram (and any other Chaos characters I use) could keep his reward from the Eye of the Gods. However, any chaos characters losing wounds would have to roll a 4+ for each wound to recover it. A character reduced to 0 wounds who didn't recover any would be dead and out of the campaign.

I feel like I should give Thane Zoe some kind of bonus for killing the Chaos Champion, but I'll have to think about what it should be.

Because the first scenario was Forlorn Hope, the besieged get the first siege turn and the dwarfs get to choose the next scenario.