I haven't had time to play Siege Turn 1 of my campaign yet. But I do have a quick update.

At the end of my last post I said that I thought Thane Zoe deserved some kind of reward for having defeated the Chaos Warrior Champion. I found the solution in the back of the Warhammer 5th edition battle book.* 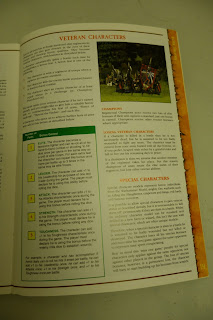 I've decided to chuck out the "equal rank" rule because it doesn't apply to Chaos Champions and is a little over restrictive. I want my characters to have a shot at actually getting a Veteran bonus.

I'm divided over the capturing standards rule. The concept of capturing enemy battle standards was chucked out in Warhammer 8th edition,  though, weirdly, you can still get victory points for the standards that your opponent lost. I'm inclined to resurrect the rule as I rather like it, especially as it gives you the opportunity to recapture fallen standards, which isn't possible under the official 8th edition rules.

That said, I'm not sure I want characters to win Veteran bonuses for capturing standards. To make it fair, I would have to extend the rule to Chaos characters and let them roll on the Eye of the God table. I think this would probably lead to a few too many bonuses to both sides. Realistically, no character is likely to win more than one or two challenges per game, but if you include captured standards that could double and that could lead to a lot of bonuses.

With that in mind, I think I am going to use the Veteran character rules, but only allow a character to have one for winning a challenge. And, having won a challenge, Thane Zoe can now re-roll all of her hand to hand or shooting to hit rolls once per game

*The battle book was included in 5th edition along with the rule book and included lots of background material, scenarios, campaign rules and a bestiary for the various monsters that, at the time, were usable by all armies but were not included in individual army books.