Rise of the Kage

After many months of basically not thinking about it, my copy of GCT's ninja-themed board game Rise of the Kage arrived on Friday. I had put money into the Kickstarter months back and then done my best to forget about it. 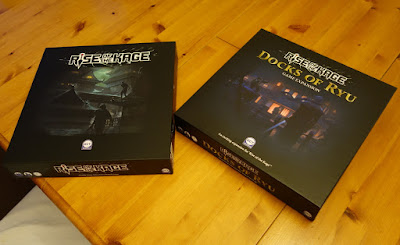 The nice thing about Kickstarters is that you can suddenly find yourself in receipt of a huge crop of new games or models that you paid for months earlier. The downside is that in can derail your existing plans (this should have been a post about painting the Warhammer fortress).

ROTK is an "asymmetric" game in which 1 - 3 players control ninja, sneaking into some location to accomplish a mission, the details of which are not fully revealed until part way through the game, while the other player controls the guards and and a "boss" character who leads them. In some ways the game is reminiscent of dungeon crawl games, like HeroQuest or Dungeon Saga, in that several players each controlling one model can team up to take on a "GM" like player who controls a larger number of weaker opponents. But the emphasis on stealth adds an interesting new dynamic.

One of the original selling points of the game was that there would be two of each model in different colours to represent different states. So you have orange models for unalert guards and red for alert, grey for undetected ninjas and green for detected. Somewhere along the line, GCT seem to have realised that this wasn't financially smart and dropped it from the commercial release of the game, where states will be represented by counters. So only we Kickstarter backers get the two colour models.

Unfortunately, something went a bit wrong and GCT sent out the wrong ratios so most of us do not have exactly fifty percent in one colour and fifty in another. This is not exactly a disaster as we still have the counters, can easily re-paint a few models and GCT insist that we have far more than we are likely to need for the game in any case. 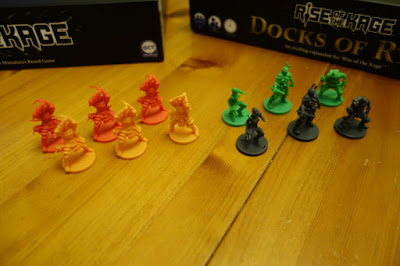 That said, GCT's first announcement of this screw-up was actively confusing and pissed off a lot of people who felt they were being fobbed off. GCT's later response struck a more apologetic tone. Given that anyone buying the game outside of the Kickstarter will only be getting models in one colour, I am not overly bothered.

Seguing from what we didn't get to what we did, we red alert level backers received two fairly substantial boxes, one for the base game and one for the docks of Ryu expansion.The contents of both is substantially similar, each contain three ninjas, a selection of guards, cards and a double-sided board.

GCT made the decision to package everything as if we had bought the game in the shops, which meant that each box came with a collection of models packaged inside, with the extra, alternate colour models, packaged separately in a small white box. Having pledged a little extra, I also got a third boss model and some cards to use the models in Bushido.

After a few early reports, I had been concerned that the models would be a made from very soft plastic with poor detail. This turned out not to be the case. The plastic is not quite as hard as Games Workshop's or Renedra's hard plastic models, but harder than Mantic's restic. There are some mould lines and most of the guards ended up with bent spears, but this should be fixable with a bit of hot water. The casting detail is excellent. This is particularly noticeable on Minato, the boss from the expansion, whose individual scars can be picked out. The only draw back is that the models seem a little small compared to those from Bushido, which is disappointing given I plan to use them for that game. 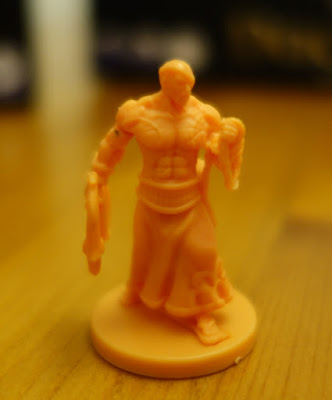 Minato, scars and all

I have read through the rules but not tried them yet. As with Bushido, the rules are better laid out for reference than for learning. The manual runs through all the cards and components first, explaining what everything means, but often using terms that aren't defined until later in the rules. It only starts to make sense once you get to the end of the rule book, and you may have missed crucial information on the way. For example, it took me some time to find out the number of starting guards (its on the boss sheet).

Unusually, the expansion contains no additional rules, just extra cards and a single sheet defining the set up areas on the new boards. Everything else in included on the new cards, which suggests the game will play very differently depending on your choices of ninja, board and boss, all of which impacts the available cards.

I'm looking forward to giving the game a go, though it will probably be some time before I try painting any of the models.