The first book to bear the title "Warhammer Siege" was released during Warhammer 3rd edition and Warhammer 40,000 1st edition and, unusually, was designed to support both games. It included rules not just for assaulting castles and fortresses, but also the various accoutrements of sieges, supplies, starving out, undermining etc. Sadly, I never a read a copy, so I can't write about it with authority. 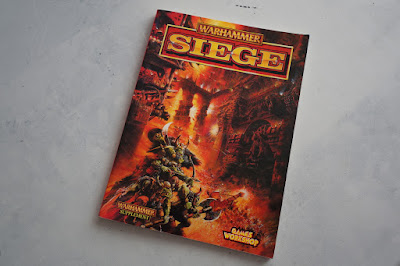 The second Warhammer siege was released roughly half way through the life span of Warhammer 5th edition and only covered Warhammer. It arrived at a point when Games Workshop had released army books for all of the established Warhammer armies and had no immediate plans to release any more. The idea that army books should be refreshed periodically had not been established. Instead, Games Workshop was experimenting with new ideas to maintain interest in Warhammer, including the campaign packs, collections of linked scenarios bundled with cardboard scenery, and this.

Flush with cash from a summer holiday job, I bought Warhammer siege almost as soon as it was released, along with a few packs of the siege equipment that accompanied it and the massive, plastic Warhammer fortress. The fortress may be the only example of Games Workshop dropping the price of something after its release. According to the price tag on the box, I paid £75, it was later dropped to £50 and, shortly before it was recently discontinued, could be had from the Games Workshop website for £61.50.

I never painted any of my siege gear, which was standard behaviour for me at the time, but I did play and enjoy a few siege games. It's fair to say that I didn't really get my money's worth.

The book is essentially divided into four sections. The first covers the nitty gritty of playing a game with a castle on the table. It deals with assaulting walls, towers and gates, siege equipment like battering rams, ladders and siege towers, and defensive gear like rocks and boiling oil.

Section two covers building a castle. This feels quite odd to modern eyes. It's easy to forget that there was a time when Games Workshop encouraged players to build their own scenery. On balance, it's probably a good thing that you can buy scenery instead of having to improvise with bits of cardboard, lego and stuff from model railway shops. But its a bit sad that players are no longer encouraged to use their imagination to create unique scenery pieces. 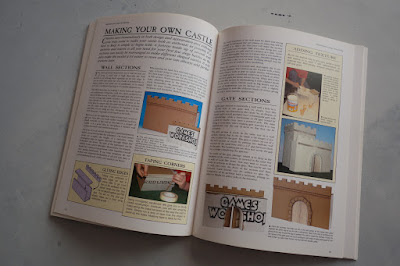 The third section presents a series of siege-related scenarios. I write related because only two of them use the full siege rules and only one more requires you to put a castle on the table. Most of the rest of them are small scale affairs simulating the kinds of activities related to sieges, such as undermining, sending for help, sallying out inflitrating and so-on.

The reason for this becomes apparent in section four, which covers the siege campaign rules. These allow you to play out a siege in full as a mini campaign, culminating in a full scale assault on the castle or fortress. The mechanics are quite clever. After an opening scenario, players carry out alternating siege turns in which they choose an action to take. These can be full-blown scenarios, or more abstract affairs, such as bombarding the walls, which is managed with dice rolls. The besiegers and the besieged have a different range of options and you can play either a fixed or variable number of turns. The effects of the siege turns are carried into the final assault scenario.

With Warhammer eighth edition's retirement, this is really the end of the Warhammer game that I know. For better or worse, Age of Sigmar is really a different experience. The effect of this has been to encourage me to try some different ideas and to dig out things I haven't looked at it in a while. Having looked over the siege rules, there doesn't seem to be anything that can't be pretty easily converted to eight edition. The points cost of the siege equipment might be a bit dodgy, but I can't see it wrecking the game. Plus, I already have more than two painted armies for Warhammer, which means I only have to get the fortress and the siege equipment painted, and I won't even need them for the first scenario.

With that in mind, I have made a pretty quick start, with the first of my walls already finished. 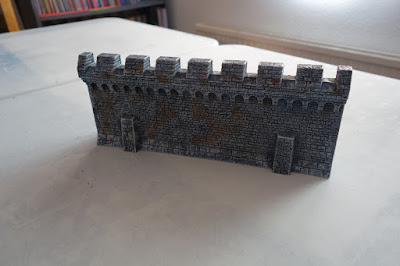 It was done pretty quickly. I sprayed it with Army Painter Wolf grey, gave it a wash of Vallejo blank ink, then drybrushed it with Vallejo stonewall grey and wolf grey (which is a lot lighter than army painter wolf grey, presumably they use different wolves). I added the stains using Vallejo umber ink. The process was pretty rough and ready, but should look pretty good on the table.