I promised pictures of my recently painted Chaos Dwarfs some time back, time to deliver on the promise.

The army as it stands was the result of a concerted effort, since Christmas, to fully complete a painting project before moving on to the next. It has paid off pretty well for these guys who have been my fastest painted Warhammer army, which is bizarre given the age of most of the models.

The army started out in 1996 at the very end of what was known as the 'great lead sale' when Games Workshop switched to lead-free white metal. The process of switching over was quite drawn out, but for the last weekend prior to the removal of all lead from the shelves, there was a sale the like of which we haven't seen before or since as all lead models were half price.

Guildford Games Workshop tried to clear some more stock by bundling up related packs into 'army deals'. After much arm twisting my Dad forked out the £65 necessary to get me the beginning of my army. It was a bit of an odd selection, with both a Great Taurus and Llamasu, as well as plenty of war machines, but only a handful of Chaos Dwarf infantry supported, unreliably, by hobgoblins, but it was a good base on which to build.

Over the next couple of years I bulked up the army with more warriors and bull centaurs. After Warhammer 6th edition came in, the Chaos Dwarfs were neglected and eventually taken off the main page of the Games Workshop web store. For a while, a number of them were still available if you entered "chaos+dwarf" into the search engine. Seeing the writing on the wall I scooped up the blunderbusses I needed, thinking more that it would probably be my last chance to do so rather than with any specific plan in mind.

The army lay essentially retired until the very end of 2011, when the release of the Tamurkhan book prompted me to dig them out. I had no intention of building a whole army from scratch at Forge World prices, but was more than happy to add some new elements and, at Salute 2012, I acquired an Iron Daemon and three K'Daai Fire born.

Despite having had many of them for 16 years or more, I had never painted a single one of them. When I first started wargaming I hardly painted anything, not being at all happy with the results. As I got older my painting rate increased, but less than the rate at which I accumulated models. Thanks to their years of retirement, the Chaos Dwarfs never made it to the top of the pile until now.

First up I needed to decide on a colour scheme. I like my armies to have a uniform look, using the same basic palette of colours. I also planned to use Army Painter quick shade dip to speed things a long. I wanted to steer well clear of the bright red look of the official Games Workshop army from the mid 1990s, but I did want to stick with sombre reds as well as metal colours and black hair and beards.

Fortunately, I had a box of old plastic Chaos Dwarfs that I didn't plan to include in the army. They are too big to rank up properly and are somewhat lacking in detail. But they were ideal for trying out colour schemes.

In the end I didn't exactly follow any of these, but used a mix of the most promising elements.

I started with the Chaos Dwarf Warriors, who count as Infernal Guard under the Tamurkhan rules. The first fifteen, including the command group, came from my original army bundle, but they were quickly bulked up to 21 (they were sold in blisters of three). Careful hunting at different games shows got them up to 28, which meant a unit of 30 with the Castellan and Daemon-smith. I added one of the old plastic Chaos Dwarfs, because I wanted to be able to field a unit of 30 without the Daemon-smith. He ranks up okay on his own and doesn't stand out too much from the crowd. 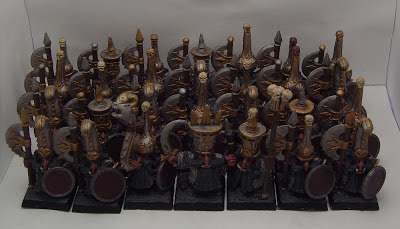 They Infernal Guard are very much the exemplars of my army colour scheme. They were given a spray undercoat of Army Painter Plate Male Metal spray. I used Vallejo copper for the metal details, their leather brown for the boots and axe handles and black grey for the hair and beards. Privateer Press Sanguine base was used for the shields, gloves and other dark red areas, with their Menoth base handling bone and teeth. Games Workshop new range was represented on the skin, which was painted in Bugman's glow. 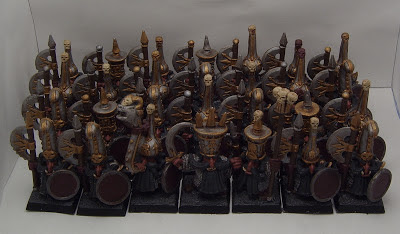 I painted them in flat colours with no shading and highlighting. I used army painter quick shade dip, though I didn't literally dip, instead using a cheap brush I got from Model Zone. I had tried dipping before and hadn't been entirely happy with the results. Finally I gave them a coat of anti-shine varnish.

The Daemon-smith and Castellan were given a bit more attention. I added a couple of layers of highlighting, as well as painting in some detail around the eyes. The models both came with back banners, but I haven't decided whether to use them or not yet, so for the moment they stay detached. I also have to decide what to do about the standard bearers empty banner pole. 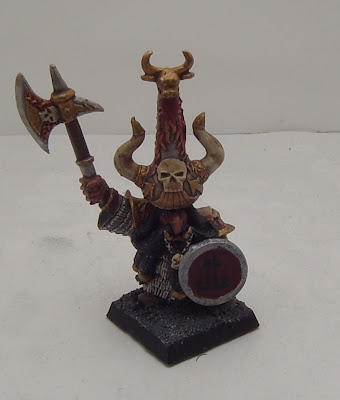 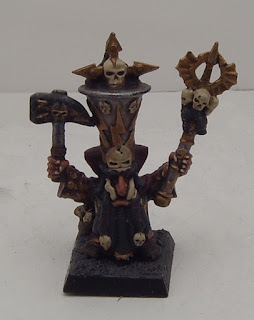 The Blunderbusses were painted in much the same way as the Warriors. In both cases, I painted them in batches of six at a time. This sort of 'industrial' approach helps to keep things moving, but stops me getting too bored painting the same colours over and over. 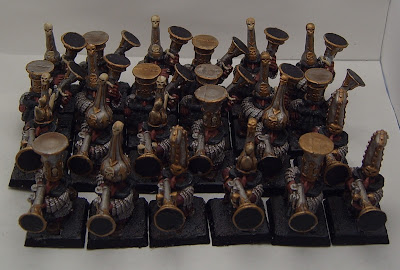 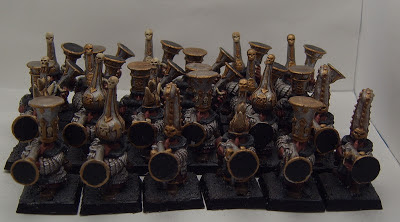