Since Mantic's open day news has got out that their first line of licensed miniatures is going to be Mars Attacks. Certainly an unexpected development. My initial reaction was to wonder 'why?' It doesn't strike you as the most obvious license to pursue. Apologies to devoted fans, but it isn't exactly the biggest name franchise around. But it does have a very distinctive look and it's retro sci-fi looks seems reasonably popular at the moment.

Thinking about it some more, it occurred to me that the most obvious licenses don't necessarily make the best wargames. Take Lord of the Rings for example, thanks to Tolkein's obsessive attention to detail we know about pretty much all the major battles in Middle Earth's history as well as the personal history of most of its heroes. We also know that a lot of major characters we're only involved in very specific conflicts. The Army of the Dead and the Mumakils were only seen at one battle. The Fellowship was only together a group for a brief period and fought as a group on only one or two occasions. This limits the value of your shiny new 'Fellowship of the Ring' boxed set if you think about it.

Lord of the Rings players are essentially stuck either replaying the same scenarios, trying to find plausible encounters that fit into Tolkein sanctioned history, playing 'what if' or alternate universe scenarios (what if Gandalf had been evil instead of Saruman, what if Boromir had survived the Orc ambush, what if Sauron had attacked Helms Deep etc) or just ignoring the background entirely and just playing it as a game. I know plenty of people are happy with the last option, but I always felt that if you were going to ignore the background, why bother playing a Lord of the Rings game at all?

So the popularity of a particular license doesn't mean that it makes a suitable game. Which brings me to a license that has been on my 'most wanted' list of games for a while: Avatar - The Last Airbender. To clarify, I am not talking about James Cameron's smurfs in space mega-epic or the dismal M Night Shyamalan travesty of a film. I am talking about the original Nickolodeon, strongly anime influenced cartoon series. 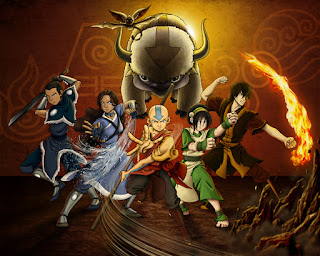 Picture by Allagea on Deviantart.com


For the unfamiliar, Avatar (as I insist on calling it, it got here before James Cameron) is set in a world somewhat influenced by medieval China in which  individuals are able to manipulate or 'bend' the four elements, Water, Earth, Fire and Air, by performing sequences of martial arts inspired manoeuvres. The titular Avatar is the one individual capable of bending all four elements and who is reincarnated throughout history. When the series begins the Fire nation has been engaged in a 100 year war against the other nations (Earth Kingdom, Water Tribes and Air Nomads) Avatar is a 12 year old Air-bender, the last of his people whom the Fire Nation wiped out in a failed bid to get rid of him. The story focuses on the Avatar and his friends attempts to end the war.

So we have four distinctive factions each with their own signature powers and looks. The world is on the cusp of an industrial revolution, so the series introduces us to steam-powered ships, tanks and airships, as well as stone vehicles controlled by earth-benders. The series also has a nice line in animals that are a combination of two real world animals, but usually a different size. So we have a cross between a komodo dragon and a stag beetle that is the size of an elephant and ridden into battle by soldiers who can throw fire balls. The Avatar gets about on a six legged flying buffalo.

The series is open ended enough that there's plenty of scope for 'further adventures' involving the main characters or, alternatively, there's one hundred years of war to play with. As well as opportunities for some very distinctive and colourful armies, I can also envisage some interesting game mechanics based on the way element-bending works.

Then there's the spin-off series Legend of Korra that ups the technology level bringing in planes and robot suits.

Of course the fact that its owned by a Children's TV channel means a wargame is very unlikely to happen Games companies would likely ignore it as being too far removed from the major demographic and Nickelodeon would probably not be interested in a game based on full-scale warfare. That said, there was a CCG a while back and if the Kickstarter ever happens, I'll be first in the door with a pledge.

But it does make you question whether the licenses that end up as games are necessarily the ones that should.