This issue marks a definite break from the previous ones. A transition point on a journey, albeit a fuzzily defined one. The cover image was also used at the front cover of the first Orc and Goblin army book, which says something about the direction of travel. 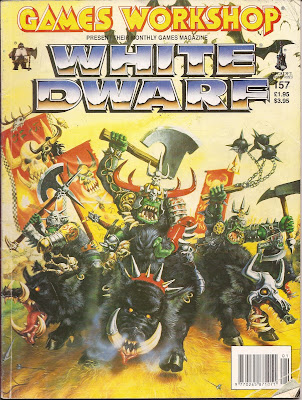 I should emphasise that I have no knowledge of what was actually going in Games Workshop studio at the time these issues were produced, but my sense is that when I first started out collecting, miniatures were being produced and rules written without a clear sense of how they would be distributed. A number of experimental rules articles found their way into White Dwarf without much of a sense of where they ultimately belonged. At its most extreme, this lead to a compilation of White Dwarf articles being the official source for most Warhammer 40,000 army lists. Even when books were planned, for example Realms of Chaos or the Warhammer 40,000 Ork books, they often read more like a collection of articles than a single, coherent work.

By White Dwarf 157, this had started to change. Games Workshop started producing complete, coherent rules supplements with all the rules needed for a particular army. This often meant producing rules for models not yet released. This transition was a staggered process that actually began with second edition Epic released at the same time as White Dwarf 141. These supplements were boxes rather than books and covered two armies each, but they were the first attempt at a coherent set of army list supplements, where every supplement was in the same format. Warhammer 4th edition followed in White Dwarf 153 and Warhammer 40,000 2nd edition in White Dwarf 166. To me, this transition marks the beginning of modern Games Workshop, though there were still a great number to come.

I have written about the subject of rules distribution before and regard this increased coherence as generally a good thing, but there were definite drawbacks. One was the change in White Dwarf. New rules articles had been its bread and butter. As the army book started to appear, White Dwarf shifted from printing new and experimental rules to reprinting pages from just released or soon to be released army books.

The transition is very marked in White Dwarf 157, which, remarkably, has only four substantial articles, though this is probably because two of them take up over twenty pages each. The first of these big articles is the new Space Wolf army list for Warhammer 40,000 first edition. In many respects, this feels very much like a WD article of old. Lots of experimental new material, with no sense of where it would ultimately end up. It is also notable that the army card concept we saw in White Dwarf 145 had already been abandoned. Despite the article's retro feel, it was probably released because the Space Wolves were being developed for 2nd edition WD only nine months away. 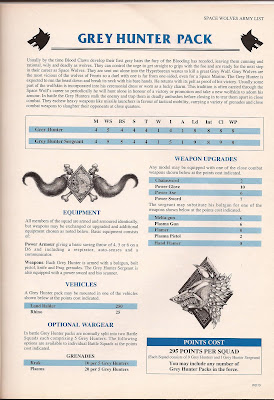 The article itself is interesting read, but mostly because most of the key elements of the current Space Wolf army are already present - Blood Claws, Grey Hunters, Long Fangs and Wolf Guard are all familiar to modern players. It shows how strong a concept the Space Wolf army was.

The second article stands in stark contrast. The Grand Theogonist rules were reprinted straight from the Empire army book, enlivened only by illustrations of the new model. While it might have inspired a few new players, the article is of little real value as anyone likely to use it would need or already own the army book.

Following this is an 'Eavy Metal article on painting the Grand Theogonist and other models shown this issue. 'Eavy Metal was also changing. In previous issues it had shown models from the team's personal collections, whatever they were working on, or the works of other talented painters. But now it had become a showcase for newly released models.

The final article is yet another break with tradition. My first encounter, in this series, with a battle report. They had appeared sporadically before, the first (I believe) was in White Dwarf 107, but from 153 they became a regular feature. This sort of article made ideal White Dwarf content. Highly visual, it provides a good introduction to new players, a good showcase of armies and tactics for more experienced players and potentially ideas for players own game. Also, although Games Workshop printed a few compilation books and put some in army books, they really work better as magazine content. With rules becoming less important this article was a good way to fill twenty pages. 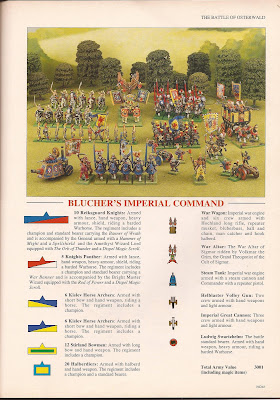 This report saw the Empire vs the Greenskins and highlights some new models. It also showed that the new spirit of organised professionalism hadn't quite reached army production as the Greenskins had only one unit of Orcs, despite featuring an Orc Warlord, and is made up mostly of Goblins, some in some not very viable units - there are only 5 netters and clubbers for instance. Meanwhile, the Empire fields two units of Knights, the new War Altar and a War Wagon.

This Battle Report is notable for another reason: the apparently accidental creation of a special character. Games Workshop had just released an Orc Shaman on a War Wyvern, but this was not a very valuable model tactically as Orc Shamans had to stay close to Orc units to benefit from their special rules. As a way round this problem, the model is recast as an Orc Warlord and equipped with the Crown of Sorcery, then a generic magic item making its user a level 3 Wizard. The idea stuck and Azhag has been a special character ever since. This in spite of a not very impressive performance in this battle. He got himself killed in turn 2 charging into the smaller of the two Imperial Knight units unsupported. 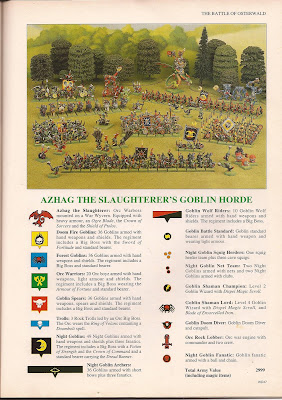 The rest of the battle manages to be reasonably interesting, as the Goblins put up a surprisingly good fight, putting a good part of the Empire army to flight. But in the end they get bogged down in unwinnable combats. The Empire general, then White Dwarf editor Robin Dews, concedes in his notes that he won mostly by look, though the limited choices available to Jervis Johnson, as the Orc General must have played a part.

So, very much an issue that marks a change from what went before. The magazine is glossier, with far more colour pages and more professional produced. But also seems to have less useful content than before.