I managed to get my hands on a copy of Forge World's Tamurkhan book, on Wednesday. I only popped into the local Games Workshop during my lunch break for a pot of Gryphon Sepia, so this was something of an unexpected purchase. 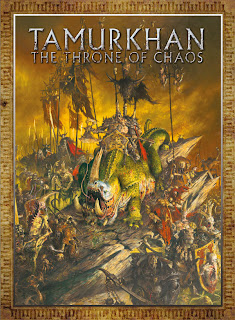 To be fair, it wasn't entirely on a whim, I had been meaning to get the book sooner or later, I just hadn't anticipated seeing it in my local Games Workshop. As a Chaos Warrior player, the books interest is obvious, but my principle reason for forking out £45 was to get my hands on the new Chaos Dwarf rules. Back in the days of Warhammer 5th edition I had a pretty substantial army and was quite keen to dig it out again. Especially as the Forge World models so far released are not too far removed from their old aesthetic.

The book is presented as being written by Alan Bligh, with an original story by Bligh and Rick Priestly. This is as much of a credit as Priestly gets in the book and its hard to determine how much of his original idea made it into the finished draft before his sudden departure from GW. The rumours talked about Tamurkhan being the first in a series of "alternate future" Warhammer books, chronicling a time when Chaos finally destroys the world. Apparently, Tamurkhan was to be the first of four books each dealing with a different Chaos Champion, one for each God, in a different part of the world.

There was some resistance to this idea, notably from non-Chaos Players, because it put so much focus on Chaos. I am not sure I agree. Quite apart from the fact the Chaos is now considered to be three seperate armies, thus justifying three books, this concept hearkens back to the old idea that Chaos permeates every aspect of the Warhammer world; it's great unifying theme if you like. Given that Tamurkhan manages to cover Chaos, Chaos Dwarfs and the Empire, it's easy to see how the subsequent books could have given space for an ally and an enemy army in addition to Chaos. Imagine a book about a Slaanesh Champion making common course with the Elves to assault Ulthuan, a Khorne champion recruiting greenskins before rampaging across the Dwarf strongholds or a Tzeentchian champion allying with Skaven in an underground assault on Bretonnia.

As it is, Tamurkhan presents a pretty conventional narrative, in which a Chaos Champion rampages out of the north, recruits an army of suitably unpleasant allies, destroys a few opponents to prove his bad-assness and attacks the Empire where he is defeated. We've seen it before in a few different army books, Tamurkhan just takes longer to tell the story and its hard not to see it as a missed opportunity.

That said, Tamurkhan does a good job of translating its central narrative into a Campaign system and a series of scenarios. The campaign system is nicely open-ended, allowing for multiple players and a wide range of armies. Despite its official status as the story of Tamurkhan it's easy to see it being used to tell the story of any Chaos Warlord. The scenarios are a suitably quirky bunch and, for the most part, don't demand too much of players miniature collection. Whether or not I manage to mount a whole campaign, I can see myself getting some value out of them.

Also on offer are rules for building a huge Chaos Horde containing units from the Warriors, Daemons and Beastmen army lists. Although it's fairly easy to do this without the official rules, there are, nevertheless, a few interesting ideas here. Including Antagonistic units, who may prove unreliable, and the dangerous possibility of attracting the Scorn of Chaos and having to roll on a chart to determine a negative effect. The general is declared the Paragaon with a number of different types available depending on the Champions Mark of Chaos (or not) and there own special rules.

The core of the book, and its obvious reason for existing in the first place, are the new rules for the various Forge World models. These are divided into three sections, Chaos, Empire and Chaos Dwarfs. The first two sections are simply new units and characters for the existing armies. Chaos gets eight new options:
Tamurkhan;
Sayl the Faithless (a Sorcerer accompanied by a Chaos Spawn);
Kayzk the Befouled (a champion on a rot beast who allows Chaos Knights to ride Rot Beasts);
Chaos Siege Giant;
Plague Toads;
Pox Riders (Plague Bearers riding the Plague Toads);
Bile Trolls;
and the Chaos War Mammoth, getting its own proper rules after being part of the Forge World range for years.
The Plague Ogres that Forgeworld also released don't get full rules of their own and so, presumably, should be used as regular Chaos Ogres with the mark of Nurgle.

The Empire selection is made up mostly of Special characters, including a Lord on a Demi Gryph (like a Griffin without wings), an Amethyst Wizard on a Dragon, a Mercenary captain and two hero choices that allow you to upgrade your infantry. The last option is the Marienburg land ship, a huge war machine and a nice alternative to the Steam Tank.

But the most important part of the whole book for me is the final section which presents the Chaos Dwarf army list. I was quite pleased with this overall. For a start, just about everything from my old Chaos Dwarf army has an analogue in the new, so using the list presents no problem. About the only thing left out is the old Hobgoblin bolt thrower. The new Dread Quake mortar and Shrieker rockets are just the old Earthshaker cannon and Death Rocket by new names, my Chaos Dwarf warriors can be used as Infernal Guard, which have options for Great Weapons and Blunderbusses, and the Bull Centaurs and Hobgoblins are included.

The list includes:
Sorcerer Prophets (Lord and Sorcerer Lord combined into one, they can ride a Great Taurus, a Bale Taurus or a Lammasu);
Heroes (Chaos Dwarf, Bull Centaur and Hobgoblin);
Daemonsmith (Level 1/2 Wizard);
Infernal Guard (Expensive infantry with Great Weapons, Blunderbusses or Fireglaives - a fire throwing halberd);
Hobgoblins (they can have daggers so can be represented by the old sneaky gitz models);
Bull Centaurs;
Shrieker Rockets;
Magma Cannon (a new short range cannon thing);
Iron Daemon (Steam powered, cannon covered land train that can tow the other war machines);
Dread Quake Mortar;
K'Dai (Daemonic constructs, no models as yet);
Hobgoblin Wolf Riders;
Siege Giant;
Hell Cannon (the same one from the Warriors of Chaos list).

I'm not sure I would want to build a whole army from scratch at Forge World prices, but I may pick up one or two of the newer items. I certainly think it would be possible to mix Mantic's Abyssal Dwarfs with the Forge World models comfortably. Also included is a small selection of Magic items and the Law of Hashut, which gives the Chaos Dwarf Sorcerers a distinctive quality of their own.

I'm not sure how balanced the army list will be, the Infernal Guard seem very expensive in points and some of the warmachines are more than a little extreme. Also, annoyingly, the Lammasu is allowed as a mount for a Chaos Dwarf Sorcerer Prophet, but if you want the rules you have to buy the Storm of Magic book. This feels pretty cheap given that you have to fork out £45 for the Tamurkhan book. At least the Great Taurus rules are included.

The book is extremely lushly presented, with a red leather effect cover, full colour throughout and illustrated in a suitably grim and moody style. However, the book is marred by a number of simple errors. For example, the Infernal Guard Champion is called a Deathmask, but in the army list it states that "the Overseer may be equipped with a pistol..." A relic of the earlie experimental rules where the champion was called an Overseer.

The special character Drazhoath the Ashen rides Cinderbreath. In the bestiary it states that Cinderbreath is a Bale Taurus, but in the army lists notes that he has a stronger breath attack and an enhanced profile. But is you compare Cinderbreath's profile to a regular Bale Taurus there is no difference.

Six people are credited as proof readers at the end of the book, so there is really no excuse for this kind of sloppiness, especially given the price you have to pay for the book.

In summary a very lushly produced book that is let down by silly mistakes and a lack of ambition. What we have is a fairly standard Warhammer saga with the rules for a few nice models and some extra bits and bobs. Would I recommend it? I'm not sure it matters. If you want to play Chaos Dwarfs or use any of the associated Forge World models than these are the only rules you are going to get. I will probably get some value out of it and probably more than I would have from a standard army book. But, for the price I paid, I can't help feeling this was a wasted opportunity.