Dreadfleet - One ship down

I actually managed to get some painting done this weekend. With the Heldenhammer complete, I got started out the monstrously fiddly Bloody Reaver. With these two painted I will have enough painted ships to try out the first scenario from Dreadfleet. 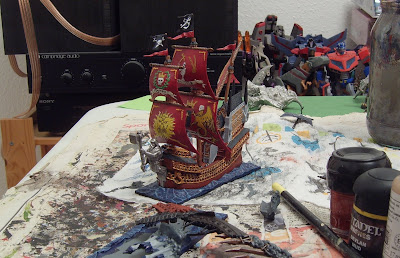 The Heldenhammer stands proud on the painting table
over the partially painted pieces of the Bloody Reaver
I've not painted a model ship before and am really quite pleased with the results. Lots of flat surfaces which are tough to highlight and the sail detail was a nightmare. It is so finally cast that you can end up burying it in plaint if you're not careful, a lesson I have learned for the Reaver. It's certainly not up to professional standards, but it is one of the best models I have personally painted.

The overally Dreadfleet aesthetic has been quite controversial, but I rather like the diverse little collection of ships. The Bloody Reaver is probably the weakest. The concept is good, a floating castle with a hull made up of the wrecked remains of its opponents, a properly undead ship. But the model seems to give up half way; quite literally as the rear of the ship is right, but the front end has a strange rocky outcrop sticking out to no good purpose. It isn't clear whether the boney lizard thing is a sculpture or a actual bones and the way the rock curves up is just odd.

But some of the other sculpts are wonderful. The Shadewraith is a marvel of sculpting and casting technology, Grimnir's Thunder is absolutely everything a dwarf ship should be and I love the use of the Elementals on the Flaming Scimitar. To my mind this is what fantasy sculpting should be. If I'm gaming in a fantasy world I want some evidence of that fact. This is why I never got into Uncharted Seas. The ships are perfectly well sculpted, but they seem too mundane and the ships of one fleet often look the same as each other but on a different scale. Not all the ships in Dreadfleet work, but there is imagination behind all of them.

I was reading this blog post the other day on old John Blanche art, and the author notes that the Warhammer world of old was often depicted as a truly unnatural place, where the laws of nature and physics don't work quite as they do in ours. For all of its tiresome obsession with putting skulls on everything, modern Games Workshop seems to be tapping into that idea in Dreadfleet. Everything from the ships, to the Islands, to the Sea Scape itself has been designed to be strange and uncanny.

"Although similar to Europe in general outline, the Old World is larger..."

"The largest mountains in the Old World are the Worlds Edge Mountains which delineate its eastern edge - the tallest of these peaks climb almost five thousand feet above the plains below."

"The grandiose scale of the mountain ranges is matched by that of the largest rivers... Of these the Reik, Sannez, Grismerie, Brienne and Morceauz are so vast that they are navigable by sea-going ships for much of their length."

In a world built on this scale, a Battleship carrying a cathedral or a floating castle seems feasible. There are fantasy worlds that, although interesting in the own right, are essentially like alien worlds. They follow the same essential rules as our own, but are simply populated with alien races and cultures. Whatever you might say against the Warhammer world, it certainly was a truly fantastic place and Dreadfleet follows that tradition.