I've mentioned Bushido, from GCT studios before. It's one of the most recent of the 'Boutique games', a rather nice term I picked up from RobH at the Miniature Page, for the recent trend for small scale skirmish games with comparatively expensive but characterful models. Bushido is based in a fantasy version of Medieval Japan and its four factions take their inspiration from Japanese History and Mythology, but with a somewhat Manga/Anime inspired aesthetic.

I always planned to write a review of the game once I had a chance to paint some models and play a game. Yesterday my little brother and I tried out the game with my Temple of Rokan taking on his Cult of Yurei. 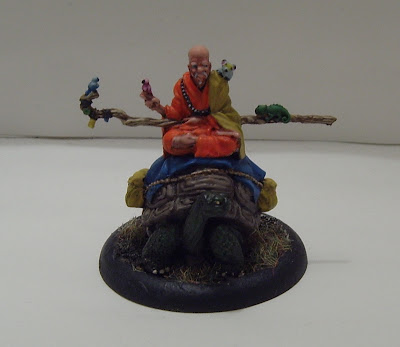 Master Ekusa
I have already written with approval at the GCT approach of producing starter sets complete with rules and dice. Each miniature also has a card summarising their stats and special abilities.

The rules don't really present any truly original elements, but combine a number of features I have seen in previous games. The basic activation sequence is reminiscent of Malifaux. Players alternate activating models and each one has two action points to spend. Actions can be simple or complex using one or two action points respectively. A slightly unusual rule is that models only carry out one action at a time, potentially acting twice in each turn. 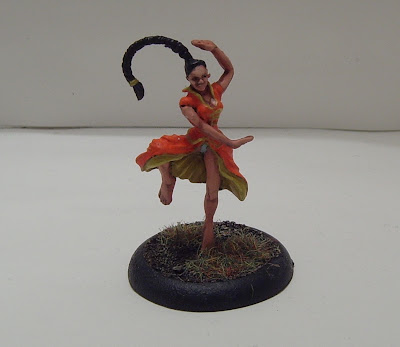 In addition to the standard actions, which include the usual attacks, movement, charging and few special ones such as aim, is the Ki mechanism. This is somewhat similar to Anima Tactic's action point system. Characters recover a number of Ki points each turn and they can be held from turn to turn, though each character has a maximum reserve. Ki points can be spent on special Ki feats, which can be anything from special attacks, buffs or debuffs or healing effects. Ki feats can be simple, complex or free. The simple and complex feats require the spending of actions, but free feats can be used at any time, even when the model isn't active.

The combat system is based on a series of opposed dice rolls. Players roll a number of dice equal to a stat such as Ki, Combat or Ranged combat and compare their highest roll. In the event of a draw additional dice are taken into account. In combat an element familiar to players of Confrontation 2nd or 3rd edition comes into play. Players can assign dice to attack or defence. All dice are rolled together, but opposing attack and defence dice are compared. This adds a small tactical element to the combat phase. 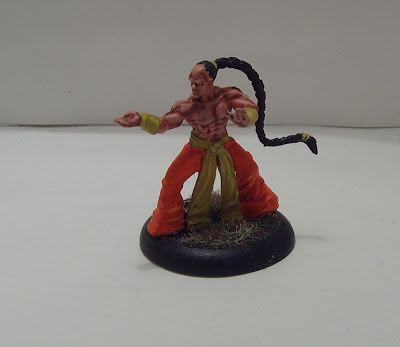 Kenko
In addition to stats and feats, each character has a number of key words corresponding to general special rules. These can be quite numerous and keeping track can be quite difficult, though Bushido is by no means the worst offender here (*cough*Malifaux*cough*) and, fortunately, most rules are only a sentence or two long.

For our first game, MLB and myself used only the contents of the starter sets, my temple of Rokan and MLB's Cult of Yurei. Rokan are martial artist monks, supported by peasants and lead by Master Ekusa riding on a turtle. In contrast the Cult is made up of Zombies and spirits and lead by the Necromancer/Puppet Master Kato. The match up ended up not being very fair. The Cult seems to be quite a fiddly faction to play, relying on fear rules and Kato's ability to raise new zombies and keep the others from dying. The Temple proved to be quite straight forward with two very strong combatants in the Martial artists Kenko and Yumi. The peasants are weak fighters, but use their bodyguard rule to protect the other monks, while Master Ekusa is a hugely effective disruptor able to prevent all hostile actions within a particular radius and having a nasty Ki-based attack that can prevent an enemy from acting.

One odd element is that are no stats for strength or toughness. Weapons can provide strength bonuses and number of wounds provides a kind of resilience, but these are, in practice, not as important as the number of combat dice rolled. The key determinant of damage is success level, the difference between the attackers die and the defenders. What this means, is that a character with a high combat stat will be generally good at fighting across the board and it is not easy to differentiate between a skilled but weak fighter and a clumsy but strong one. 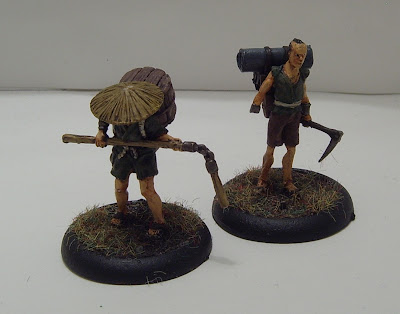 Ichiro and Atsuko, Peasants of Rokan
There are a lot of distinct processes and rules to keep track of, particularly the keywords and MLB forgot about fear several times. However, most of the processes are quite straightforward and there are some clever mechanisms, such as turning the character cards to keep track of whether a character has activated. We will play again, but I suspect the Cult will prove more effective as MLB gets a better handle on their special rules.

One thing that is definite is that the miniatures are well sculpted and distinctive and the game world suitably different from other Boutique games. Definitely worth further investment of time and energy.