Before we start, apologies for the poor quality of the pictures. I forgot to take my regular camera so these were taken with my IPhone.

Colours, hosted by Newbury and Reading Wargames Society, has been always a show that I thought was too far away and too small to be worth the effort. This only goes to show my poor geography skills as I discovered earlier this year that it was only two short train journeys away and so, with My Little Brother in tow, I set out to see what it had to offer.

Colours certainly takes place at a slightly unusual venue. Rather than the more common school hall, convention centre of leisure complex it takes place at Newbury race course. Or rather one of the substantial hospitality buildings set up to watch the races. It certainly provides ample space, but in a building designed for height and view rather. The end effect is three long and thin floors. In fact it was rather like taking a conventional hall, slicing it in three and stacking the three bits on top of one another with quite a lot of stairs in between. This still left plenty of room for games and stands, but did leave a few rather squeezed. Simple Miniature games had inadvisedly brought an extra stand up display rack which meant getting to their stall was like squeezing down a narrow alley. Atmospheric, but not very convenient. 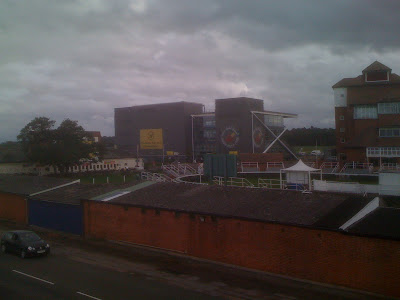 The Venue - in its rain-soaked glory
I had thought of Colours as medium-sized show, but that probably comes from comparison with Salute which is insanely massive. In fact it was quite big, with over 70 traders in attendance including plenty of familiar local faces but also a few bigger names like Warlord and West Wind. I was surprised not to see Mantic, as they had sent a stand to the much smaller Valhalla earlier in the year. But there was no shortage of their products on offer. In fact the bigger companies may have suffered on the day as they generally stick to official prices while stands all around undercut them. Why pay full price for Warlord miniatures when you can save a couple of pounds by walking to the stand next door?

The show format put the traders at bottom, working up to a level of half traders, half games and then to games, tournaments and the bring and buy, with a few exceptions for contrary traders putting on demo games, like West Wind showing off Mercs and GCT demoing Bushido (of which more below). I thought the layout worked quite well, allowing you to get your shopping out of the way before ascending a few (well quite a lot) stairs to play some games.

I went along with no fixed purchasing plans and allowed myself to get lost in the ranges on offer. GCT games and Bushido caught my eye. I had been vaguely aware of them from news items on TMP and TGN, but never paid very much attention. They were another fantasy skirmish game and I had plenty. Sadly a good display demonstrated that you can never have too many games and their fantasy take on Medieval Japan was an immediate draw. Both MLB and myself left satisfied with a starter pack each to try.

Gaming wise there was a good mix of Historical, Fantasy and Sci-Fi games and also of participation and demo games, though there seemed to be fewer quick 'pick up' games then I have seen at other shows. Many of the participation games seemed quite long runners requiring you to dedicate an hour or two of your time. Though perhaps this was more about timing and I simply missed the shorter games.

A few games caught my eye. Crooked Dice's 7TV demo looked impressive and quirky as always. 7TV uses the same basic engine as their previous Doctor Who miniature game, but with a theme based around cult TV shows and films from the 60s to the 80s, like the Avengers and James Bond at its camp height. The rules make reference to episodes and cast, rather than games and armies. It also has the advantage of needing no licence and so they can actually sell it, unlike the Doctor Who game which remains determinedly unofficial.

This set up saw a team of heroes face a villainous alliance in their lair in a dormant volcano (where else). Obviously a great deal of work had gone into the board, with the obligatory giant missile and the little yellow helicopter a particular highlight. 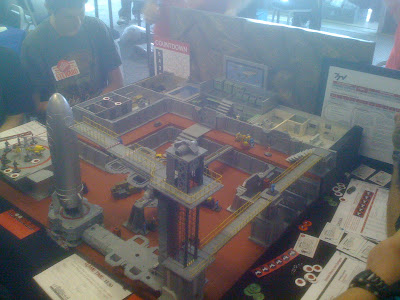 MLB and myself spent enjoyable hour with the RAF Wargames Association playing a Stargate themed games searching for missing scientists in an ancient Egyptian temple. The scenery for this came from a Playmobil set purchased on Ebay which shows that you don't need to spend ages on bespoke terrain to produce a good looking game. 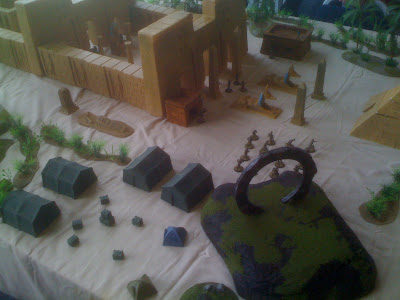 A couple of other demo games stood out from the crowd. A stone age people hunting mammoths scenario by Lincombe Barn Wargames Society featured some striking mammoth models and well made fire templates. And I finally saw a game based around the opening scene of Gangs of New York by Maidenhead and District Gamers, something I have been wanting to see since I first saw the film. 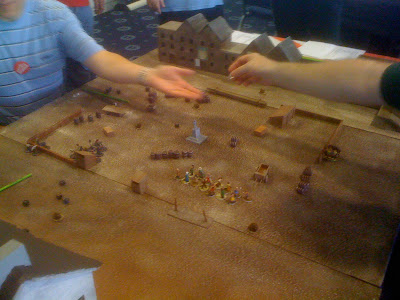 On a side note, the food on offer was also slightly better than normal for a show of this size. Taking advantage of the Race course catering facilities there was a range of pasties and paninis, albeit with a long queue, and a licensed bar. Definitely a perk for some gamers, though as a non-drinker not so important for me.

Overall an enjoyable show with a good range of traders and games. My only regret being that I missed it in previous years.