My second look back on old White Dwarfs takes us to January of 1991 and WD 133. The front cover this time depicts the Blood Angels, lead by a ridiculously shiny gold armoured Captain, who would go on to be the inspiration for the special characters Commander Dante and Captain Tycho. Though not as popular as 121's cover, this image did do double duty as the front cover of the Warhammer 40,000 compilation (see here). 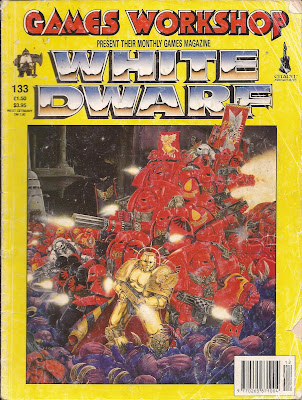 The overall feel of the magazine had not changed greatly in 12 months. We still have mostly two colour articles, largely focused on new rules with little over arching theme and little coverage of Warhammer Fantasy Battle. Though the exclusively rule-based articles of WD 121 have been supplemented here by a rather useful 'Modelling Workshop' article on Fences and hedge rows. Modelling workshop had been running for some months, but had been focused on larger or more elaborate projects like barns, cottages, ruined temples, etc. So an article on something more straightforward was very welcome. The end result is well illustrated and easy to follow. Definitely of use even to modern players. 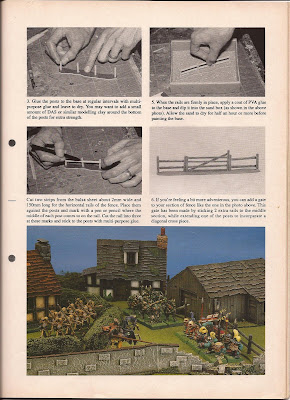 A surprisingly large proportion of the rest of the issue is devoted to the rules for Mek-boys for the Space Ork army. Since the preview in WD 121 the Orks had received a considerable amount of new material, much of which would ultimately end up in their two supplement books "'Ere we Go" and "Freebooterz". Having printed an army list, vehicle rules and rules for most basic troop types, WD had turned its attention to more and more obscure rules. Given their current role within the Ork army, basic characters with access to slightly specialised equipment, the first edition rules for the Mek boys are remarkable, both in quantity and quality.

The article provides a set of malfunction cards that the opposing player can play on the Ork army to represents the unreliability of their equipment. Each Mekboy in the Ork army provides a mekboy card that can cancel out he malfunction. On the face of it this is a fun little 'game within a game' but when you consider that several different ork troop types had similar amounts of special rules you can imagine how complex playing an Ork army could be. The second part of the rules is devoted to the Shokk Attack gun, a weapon still around today that propels snotlings through Warp Space at the enemy. The rules include two large tables used to determine what happens when Snotlings appear inside vehicles or battle suits (such as Terminators) and the amount of detail given to each entry gives a good indication of how much fun the designers must have had designing these rules. For example: 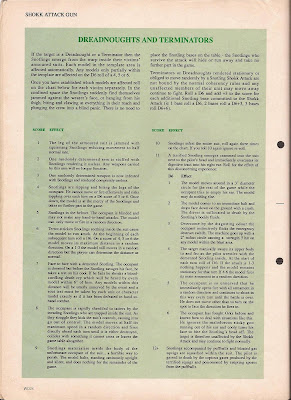 It feels like the designers were a little out of control, creating rules that were great fun to write and read, but cumbersome to play. When you consider that Mek Boys are one small part of one army, and that other Ork units were given rules every bit as elaborate I imagine the fun would wear off quickly during an actual game. At the age of 11 I spent ages reading through the Ork rules, but rarely put them into practice in anything but the most basic way.

The next most substantial article is devoted to new metal parts for Epic Titans and serves as a good reminder of how Epic's status has declined from once being the third core game. The article had obviously been produced to coincide with the release of the new pieces, and shows that even in the early 1990s WD content could be dictated by the release of the month. That said, as marketing strategies go this is fairly half-arsed. The rules were never published anywhere else, leaving players without this issue scuppered (at least until the release of Epic 2nd edition only 8 months later). 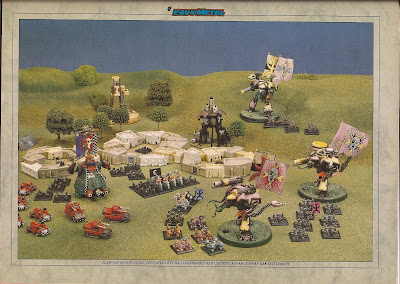 A few quick Space Hulk missions fill up some space and provide a little more usable content, but the most unusual element, to modern eyes, are the four pages devoted to special offer armies.

Two of them are for Warhammer Fantasy armies from Marauder miniatures. Three armies are on offer, Dark Elves, Orcs and Dwarves. At the other end of the magazine, there are two pages of special offers for 1,000 point Ork armies, six in total, one for each clan. These armies vary in price from £80 at most to as little as £30. What is striking is not only the dramatic price difference between then and now, but how much larger armies seem to have gotten. The Warhammer armies are all perfectly playable at 2,000 points each, but the Orc one, for example has only four infantry units of only 20 models each (2 of which are Goblins) and four war machines. Its hard to imagine White Dwarf presenting an army that size now, let alone selling it. The Dwarf and Dark Elf armies contain units of 10 models, barely viable now, while the Ork army uses mobs of 5 Orks. Part of the increasing cost of the Games Workshop hobby is not just more expensive models but the insistence on fielding more of them, an attitude reinforced in White Dwarf which now seems to operate a minimum army size of 3,000 points. 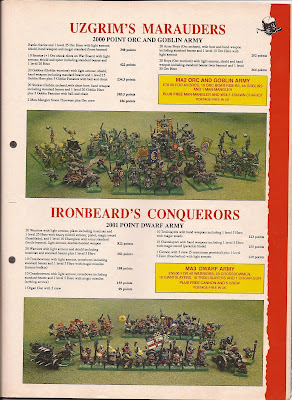 So, after White Dwarf 121, 133 is more of the same. Lots of rules, no coherent theme and some shockingly cheap armies. But, little did I know at the time, a price rise was on the horizon, the first of many, it will be interesting to see were we go in a years time.