Battle of the Sarcophagus

Drawn by a source of magical power, Saargash's warband made their way through the forest until they came to a clearing. In the centre was a ruined and crumbling mausoleum decorated with Slaanesh runes and icons. Their path had been guided by Slaanesh himself. But Saargash's elation turned, exquisitely, to anger as he saw that another warband had arrived first.

Saargash beheld the strange site of a Dark Elf warrior bearing the rune of Nurgle.

“Back away,” the Champion called out. “We have no quarrel, but this find is ours.”

“Slaanesh protects and rewards his own,” Saargash called back.

“So be it,” was the Dark Elf's response. 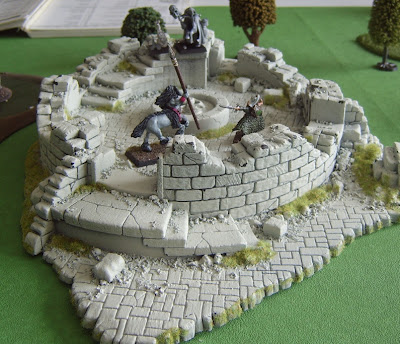 Seeing his brother outnumbered and with himself and his beastmen still some distance away, Saargash used his power to call down a mystic mist, obscuring the temple. The rest of the warband rushed to the ruins, but, by the time they reached it, the Champion and Sorcerer had fled.

Saargash commanded his beastmen to open the sarcophagus and they were engulfed in a cloud of dust. Stepping out from the ruins, still clad in the tattered remains of his robes, was an undead Sorcerer of Slaanesh. It shrieked out an inhuman cry and struck at one of the beastmen, who staggered back. But they stood firm. Saargash leaped forward and struck the creature twice with his blades. It collapsed in a pile of dust and bones. As the champion collapsed, Saargash snatched up his sword, which glowed with Chaos Power. 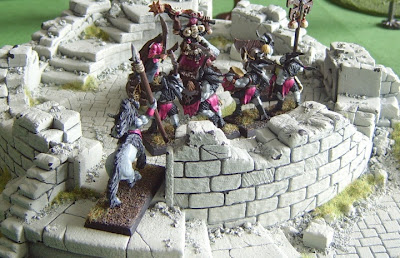 Holding the sword aloft in triumph, Saargash smiled as Slaanesh bestowed a new reward. A musky perfume emanated from his body, binding to his will all who dared approach. Skurn and Rahm, who had not been badly hurt, were also rewarded with spears scavenged from the wreckage and new emotions: a fierce hatred of men and dwarfs. 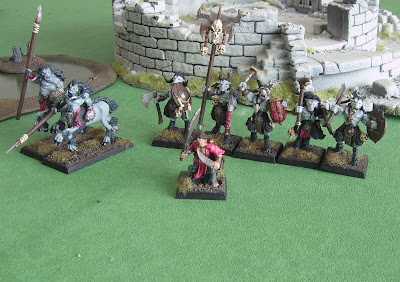 This was the first test of the Realms of Chaos rules and my randomly generated warband and saw Saargash Champion of Slaanesh take on my little brother's decidedly eccentric Nurgle warband, lead by a Dark Elf Champion and consisting of a unit of Ghouls and a Chaos Sorcerer with the head of a Goat. I won't write about it in too much detail in case he decides to write about it on his own blog, but if he does I will add a link.

We had decided to play a scenario from the Lost and the Damned book which saw our two warbands contesting control of an ancient sarcophagus. MLB won the dice roll which put him in control of it at the start of the game. He sent his Ghouls out ahead, trying to use nearby swamps as cover. Unfortunately for him, he underestimated the reach of my Centaurs who charged and quickly sent the Ghouls scattering (they break automatically if defeated in combat).

At this point we hit some difficulty with the rules. In third edition Warhammer, fleeing units are not wiped out of caught, they just keep running with the enemy getting a free strike against them. However, it was less than clear whether both units kept running each turn or only in their own. Rather than pursue one remaining ghoul all the way across the table, I elected to take a leadership test and hold my centaurs back. However, this left them dangerously exposed in the middle of the ruined tower that housed the sarcophagus. MLB's Wizard immediately blasted one with a fireball taking him out of the game.

Although I was in the stronger position, I was concerned about losing both centaurs and was pretty sure that the Dark Elf Champion could do some serious damage to me even if I was confident of beating him. So I dropped a mystic mist on to the tower, blocking all line of sight for three turns. At this point MLB decided discretion was the better part of valour and we agreed his warband could slip away.

With the battlefield mine I could open the sarcophagus and roll on the random table to see what it contained. Unfortunately, I was immediately attacked by an Undead Chaos Champion. We randomly generated the champion, who turned out to be another Slaaneshi Sorcerer, and gave him one reward and one attribute, which ironically turned out to be skull face. Fortunately years of undeath had taken its toll and Saargash was able to take him out. This landed me a free magic weapon with two chaos properties - magic thief which absorbs the power of other weapons and swiftness which boosts initiative.

Saargash also got enough victory points to roll for his first Chaos Reward. I initially got Chaos Armour, but decided this was a bit mundane, so I refused it in favour of rolling on the Gifts of Slaanesh table .His first reward: Musk, which forces enemies to pass a Will Power test before they can attack him. Though its biggest bonus was that I wouldn't have to convert Saargash to use it. My centaurs also generated a new chaos attribute and irrational hatred, though the one hit by the fireball suffered a chest wound and lost a point of toughness. I will have to model a burn in someway. Sadly, I didn't get any new followers this time.

One aspect of this style of campaign gaming is how much more you worry about losing models. I have been playing one off games for so long that the thought of preserving my troops for future battles didn't occur. In retrospect, I was foolish to leave my centaurs so exposed. On the other hand, MLB was seriously lucky in that none of his Ghouls suffered any permanent injuries.