A Brief look at Realms of Chaos

Back in early 1990s, Games Workshop's production of supplements for its core games was not nearly as straightforward as it is today. Now each army has its own army book released along with most of the miniatures for that army. Back then things were a touch more haphazard. Warhammer Fantasy Battles 3rd edition was not too complex, the majority of the games army lists were included in the single source book Warhammer Armies. Warhammer 40,000 players, however, had a more difficult time. Each army list was published first in White Dwarf, the majority of which were collected into two best of collections the Warhammer 40,000 compendium and the Warhammer 40,000 compilation. The Orks were lucky or unlucky depending on your point of view and got two huge source books 'Ere We Go and Freebooters. In addition to this, 40K received two supplement books revising the rules for vehicles and weapons. 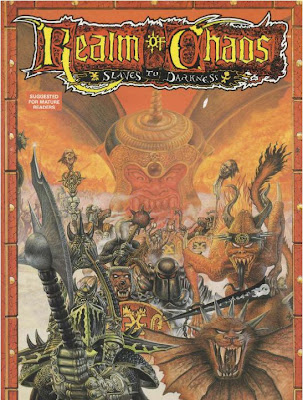 Front cover of Slaves to Darkness
It was in this context that the Realms of Chaos books appeared. If it isn't now, back then Chaos was certainly regarded as the defining idea of the Warhammer and Warhammer 40K games, as well as being the concept that linked them together. Realms of Chaos was Games Workshops attempt to provide the definitive sourcebook to describe Chaos in all its forms and across its games. It was released in two huge hardback volumes, subtitled Slaves to Darkness and the Lost and the Damned, costing a hefty (for then) £18 each. They covered Warhammer, Warhammer 40K and Warhammer Fantasy Roleplay. Interestingly, rather than split the books by game system, Games Workshop chose to divide them by Chaos Power. Slaves to Darkness focused on Khorne and Slaanesh, the Lost and the Damned on Nurgle and Tzeentch.

As well as rules for Daemons, Chaos Magic, Chaos Weapons and army lists for both games, the books provided extensive rules for randomly generating Chaos Champions and their Warbands. These could be added to your armies, or used as the basis for a Campaign pitting champion against champion in a quest for Daemonhood. This was an early example of a campaign system that saw players lead small groups of miniatures that gained experience over time and foreshadowed the systems used by Blood Bowl, Necromunda, Gorkamorka and Mordheim.

The rules were certainly complex and not always well explained. Champions were randomly generated, received randomly generated followers, fought battles and gained further followers and Chaos rewards. Slave to Darkness outlined the system, but didn't do a great job of it. A two page diagram intended to explain it visually ended up making it more confusing. 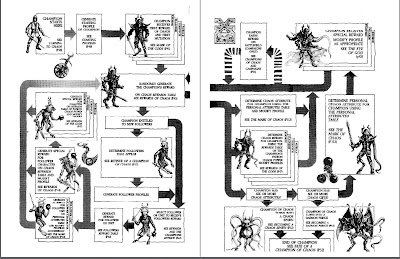 See, simple!
It was left to the Lost and the Damned to really run with the idea, simplifying and clarifying the basic rules as well as updating the followers table. It also included new rules for Beastmen, Minotaur, Centaur and even Dragon Ogre champions and a series of random scenarios, concepts and locations for games. The rules strongly encourage using a Games Master to moderate proceedings, which was probably sensible as the rules were decidedly rough and ready and little attempt was made to explain how such small 'armies' worked in the context of a game designed to accommodate large forces. 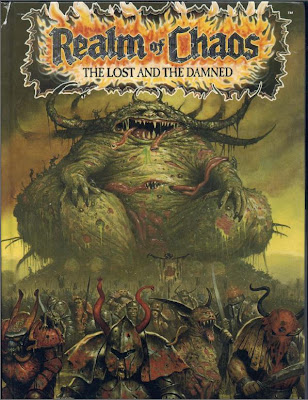 Front Cover of the Lost and the Damned
The rules read very much like a tool box that players can dip into and use, picking and choosing what elements they like and ignoring what they don't. In that way they mirror Warlord games Black Powder and Hail Caesar, though Rick Priestly was only credited as contributor on the first volume and co-writer of the second.

One of most enjoyable aspects of the rules for me is how glorious random it all is. Games Workshop of old loved d100 tables and there are plenty of them: a table for randomly generating starting champions (mostly humans, but allowing Dark Elves, Chaos Dwarves and a range of strange possibilities including Gnomes, Vampires, Halflings and Werewolves); tables for randomly generating followers, with separate tables for Minotaurs and Beastmen; tables for magic items; tables for Chaos rewards (plus one for each God); Chaos weapon tables; a table to determine the features of a randomly generated daemon prince; and best of all a d1000 table for Chaos attributes, a range of mutations from tentacles arms, cloven hooves and beaks, to invisible, walking head and growing a futuristic weapon out of your arm. Following the tables exactly would have meant hacking your models to pieces every few games to produce new conversions. 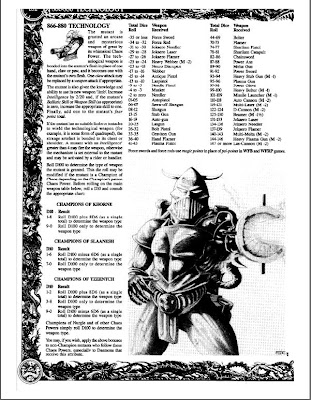 It's also completely unbalanced and unfair. Although the tables skew towards weaker followers and champions it is entirely possible to see a starting warband lead by a Level 25 Minotaur Champion (Warhammer 3rd edition ranked champions in levels from 5 to 25) with two dragons facing an ordinary human with a single goblin armed with a stick. This is another reason why a Games Master is all but mandatory. But to some extent this fits the concept. Chaos is inherently random and random isn't fair.

Another interesting thing is that the rigid distinction between armies present in modern Warhammer does not exist here. It is perfectly possible to see Goblins, Orcs, Dark Elves and Skaven join a warband. Even halflings and Vampires can get in on the act. This reinforces the idea that Chaos prevails throughout Warhammer world touching all races and that anyone can pledge themselves to a Chaos god. Chaos armies and warbands united by religion, not race and Chaos is a concept that touches the whole Warhammer world.

When I first started collecting Games Workshop models, Slaves to Darkness had been released but the Lost and the Damned was still on its way. At that time, the first port of call for any Games Workshop news was always White Dwarf and extracts from the new book were printed regularly. Long before I even knew what Warhammer was, I knew what Realms of Chaos was and the concept of randomly generating and building warbands fascinated me.

With modern Games Workshop miniatures having gotten so expensive now seems like the perfect time to return to a way of playing Warhammer that requires only a small number of models and that can be built in increments.

With that in mind, my little brother and I have dug out the rules and have been rolling up random warbands in earnest in preparation for a new campaign. We have made some slight tweaks to the rules to, hopefully, make a more interesting campaign. Each starting Champion gets two rolls on the followers table instead of one, this is because one character and one unit each does not make for a very interesting game. We also agreed to re-roll ridiculously extreme results, a rule we had to follow very quickly when MLB's first champion managed to generate a sword with a Daemon Prince trapped inside it.

In many ways, the Chaos Warband system is ideally suited for modern Games Workshop models. Plastic miniatures are more easily converted than metal, come in multiple pieces and, mostly, provide plenty of spare bits for conversions. I've accumulated a pretty substantial 'bitz box' over the years, which makes it easy to put together a few warbands. With the price of miniatures constantly rising, a small, skirmish game seems far more appealing than mass-battle Warhammer. Expect to see more posts on our progress soon.