Rolf Hurtziger was a member of mercenary band plying its wares in the Northern Empire and Kislev. He was a physically large and powerful fighter, the Regimental Champion and first into the fray in every battle. Celebrated by his colleagues he was secure in his position. This was to change.

Following an encounter with a group of Northern Bandits, Rolf woke one morning to find his arms covered in marks. At first he took them for sores and feared he was coming down with a nasty disease, but on closer inspection he realised he was covered in tiny suckers. Fearful of his comrades reactions he covered his arms and tried to carry on as before. But the changes were to continue, the bones in his arms softened, the joints disappeared allowing him to flex them in all directions. When his fingers shrank away into his hands he could no longer keep his mutation concealed.

His comrades caught him sneaking away from a battle and at first assumed he was deserting. Pursued, Rolf panicked and, finding he could still grip his sword in his tentacle arms, killed three of his former friends before he knew what he was doing. Chased by his own band, Witch Hunters and Imperial troops, Rolf fled into the Drakwald forest..

Abandoned and starving, Rolf cursed fate, his former comrades and the Gods that had abandoned him. He defiantly vowed he would serve any God who restored him to his former place. His call was answered by the Chaos God Nurgle, his pain dulled and his skin took on a sickly pallor.

Still lost and alone, Rolf blundered through the Forest until he came across a small band of Beastmen. Rolf drew his sword expecting to fight, but the Beastmen recognised a Champion marked by a Chaos God and pledged their allegiance to him, becoming the first of his followers.

Leading his new followers into the depths of the forest, Rolf encountered a small group of Orc scavengers camping out after raiding a merchant caravan. Rolf had faced Orcs before and knew how best to handle them. Approaching their leader he bellowed out a challenge. An angry armoured Orc with two massive cleavers faced him. Armed with an axe given by his Beastmen followers, Rolf slew the Champion, his tentacle arms giving him a longer reach and range of motion.

Standing over the body, Rolf expected the Orcs to flee, but they seemed uncertain. Recognising Rolf as an aspiring champion of Chaos and seeing his Beastmen followers, they threw down the weapons and pledged to join his warband. Rolf gave a silent prayer to his new God for guiding him to these new followers.

The Warband of Rolf Hurtziger – Champion of Nurgle 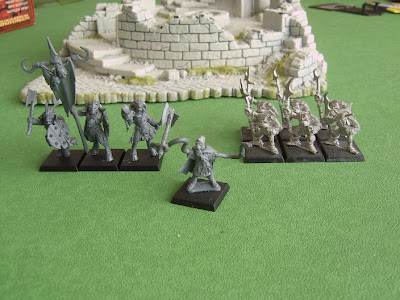 Rolf's body, cloak and upper arms, are a spare Gripping Beast plastic Saxon. One major advantage of the Gripping Beast box sets is I ended up with a few spare parts. His tentacle arms are bit box pieces, probably from the plastic Chaos Spawn box. His head was a spare Bretonnian Man-at-Arms, who I thought had a suitably grim look. Finally, I got the axe and pendant from the Marauder Horsemen box, the latter covering up a rather inappropriate Crucifix on the original miniature.

Rolf's warband needed little converting. The Beastmen are from the current GW Beastman Gor box, which seems a lot more reasonably priced when you only need a handful. I swapped out their banner, which seemed a little large for such a small warband, for a spare from the Chaos Marauder box. The Orcs are veterans of Warhammer 3rd edition; they originally came from the Ruglud's armoured Orcs boxed set, which still exists today in a somewhat different form. These were the first Orcs for my original 3rd edition Orc army and have fought with me through 4th and 5th edition, though I never got around to painting them. The 3rd edition aesthetic and battered armour seemed to suit a Nurgle warband. 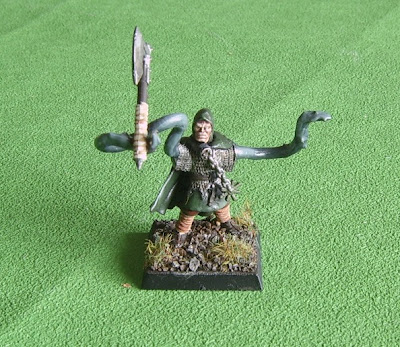 A painted Rolf, ready for battle