In a tiny backwater on the edge of the Empire, a poor farmer's wife gave birth to a baby boy with a single eye in the centre of his forehead. Terrified of the taint of Chaos and the consequences to herself and her family she begged her husband to take the child and dispose of it. Her husband agreed, taking the baby into the forest, but when the moment came he found he couldn't bring himself to murder his son. Instead he abandoned it, reasoning that nature would take its course and offering a silent prayer to any watching God. The prayer was answered..

A Chaos centaur, hunting in the forest stumbled across the infant. A helpless human child would normally be no more than an easy meal for a centaur, but this one saw the child's single eye and recognised him as a gift from the Chaos Gods. He took the child back to his tribe where he was raised among the Centaurs as one of their own, naming him Saargash (meaning gift of fate or fortune).

As the child grew he displayed signs of magical power and the Centaur's counted themselves blessed. Taking Slaanesh as his patron he assisted the Centaurs in the raiding. However, spoiled by his Centaur 'parents' he became increasingly arrogant and vain, demanding the other Centaurs treat him as a superior and provide him with tributes and gifts. Many of his tribe resented this, but more troublesome was his frequent attacks on human settlements, born from a desire for vengeance against his true parents. With Saargash drawing unwanted attention, many started to speak out against him.

Open conflict was only avoided when Saargash announced his intention to leave the tribe and seek his fortune as a Champion of Slaanesh. Secretly, he had long tired of the Centaurs limited ambitions. Two of his centaur 'brothers' joined him in his quest and formed the first members of his warband.

Saargash's first destination was a clearing inhabited by a small band of beastmen. The Centaur's had had dealings with them before, trading plunder for alcohol and weapons that the centaurs were too clumsy to construct themselves. Saargash intended to trade for supplies, but when he approached the camp a more sinister idea came to mind.

With his centaur brothers in front, acting as bodyguards, Saargash strode into the clearing chanting arcane words and raising his hands in strange and obscure gestures. The confused beastmen rose to their feet ready for attack, but then something strange happened. The beastmen started to dance around the clearing in a stupor. They dropped their weapons and ignore Saargash and his warband. As the dance reached a crescendo, Saargash's brother stepped forwards and thrust his spear into their leader's heart. The dance ended immediately. The Beastmen, confused and leaderless, saw that Saargash was a mighty champion and falling to their knees submitted to him. Saargash simply smiled.

After I had written up the details of my last warband, it occurred to me that I hadn't written anything about the process that created it. I had forgotten that just because I had a copy of Realms of Chaos to hand, it doesn't mean everyone did. So for this warband I will explain how it was created.

I started with my champion and rolled on the Starting profiles table. This got me a human, hardly surprising as this is the most common result though Chaos Dwarves and Dark Elves are also a strong possibility. Having generated a human, I rolled again to find out what type and got lucky rolling up a Level 15 Wizard. The level 15 refers to the number of bonus points added to the standard human profile, so my wizard has a total of 15 bonuses.

Next I chose my patron God. As a wizard, Khorne was right out and I already had a champion of Nurgle. Tzeentch would have been an obvious choice for a Wizard, but my little brother had generated a Tzeentch warband so I decided on Slaanesh. My choice of patron determined my champion's Mark of Chaos, for Slaanesh this got me a +1 bonus to my champions willpower and a random chaos attribute. For the latter, I had to roll on the gargantuan d1000 Chaos attribute table and got 1 eye. This doesn't do much except reduce his ballistic skill, but at least he didn't lose a leg or an arm.

My next step was to generate starting equipment, as a level 15 wizard my champion got d6+2 points to spend, but I only got 3. As a Wizard, my champion couldn't use armour or a shield without reducing his ability to cast spells, so I simply bought him two hand weapons so he could benefit from an extra attack. Finally, I generated my Champions magic points and spells. A level 15 wizard can cast up to level 2 spells, and has three at each level. I had to take the level 1 and 2 Slaanesh spells and then picked a selection from the Battle Magic list that seemed interesting.

With my champion generated, I had to roll for his followers. My first roll got me d4 centaurs. I rolled a 2. This left me with an unusual warband, a human wizard leading a pair of centaurs and it took me some time to think up a background story that made sense. I was inspired by a passage in the Realms of Chaos section on beastmen that described how mutant children are sometimes abandoned by their parents and raised by beastmen. If beastmen could do it, why not centaurs and so Saargash Warpscarred was born.

A little while after this my brother and I decided we would give our champions two rolls on the followers table as this would make for more interesting battles. My second roll got me 5 beastmen who automatically got a standard and a musician. 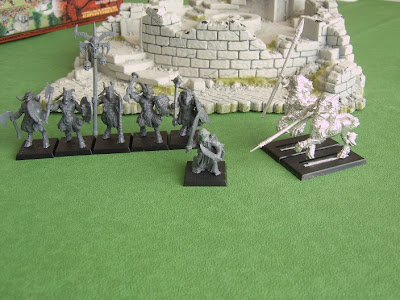 For the body of Saargash Warpscarred I used an Empire Flagellant, my brother and I had acquired a box as he had ended up with 4 Chaos Cultists as his starting followers. The torn and bedraggled robes seemed to suit a champion who had grown up in a forest and probably had to scavenge and make his own clothes. I replaced the weapons with two swords from my Beastmen box. As a Champion of Slaanesh, I wanted Saargash to start out reasonably good-looking so I used a spare head from the Bretonnian Knight boxed set, using greenstuff to cover up his eyes and add a new one to his forehead.

The warband was fairly simple to put together. I already had a beastman boxed set and used spare parts from the Chaos Marauder warband to give them a standard and a musician. For the Centaurs I decided to use Centigors, grabbing two from Games Workshop mail order before they convert them to finecast.