So, I finished my first Ghar Assault squad for Beyond the Gates of Antares.

As with the Concord, I wasn't too keen on the official colour scheme. In the case of the Ghar, it looked good enough but didn't fit my idea of Ghar technology. The Ghar are a highly aggressive race of genetically modified humans, created to fight a war long since over. Compared to the other BTGOA factions, their technology is primitive and dangerous both to the Ghar and the environment. The relatively clean light grey of the official paint jobs didn't look right to me, I wanted something darker and grungier. 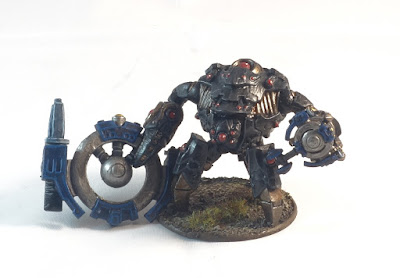 Assault Ghar teaches the Concord drones not to get too close

I've seen Ghar painted well in red or in plain metallic colours, but I ended up using the same colour scheme as I used for my Chaos Warriors; the bulk of the armour in black, with exposed metallic areas with ink washes to make it look dirty and corroded. I added some red to give a splash of colour.

The black areas are Vallejo black grey, highlighted with dark grey. The metal areas are Citadel boltgun metal with washes of Nuln oil, Agrax earthshade and Fuegan orange to dirty them up. The red areas are citadel Mechrite red with a bit of Evil Sunz scarlet highlighting and a small patch of Privateer Press Menoth white highlight, to suggest light. 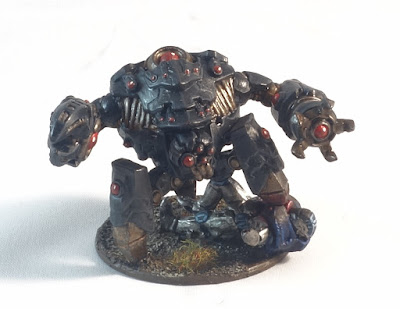 Assault Ghar 2 puts his foot in it


I also wanted my Ghar to fairly dynamic, not just marching forward. So, with that in mind, I grabbed myself another box of plastic Concord troopers to use as modelling fodder. This was another reason to leave the Ghar until I had finished the Concord. I wanted to make sure I had the Concord colour scheme right before painting the ones the Ghar were variously smashing, stomping or eviscerating. 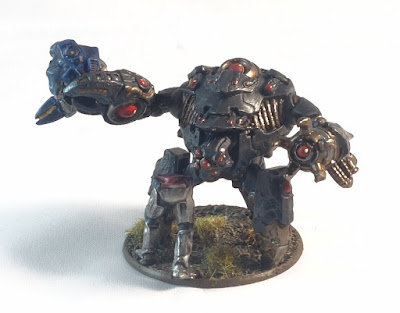 Assault Ghar 3 takes a little off the top

Sometimes I can't get a good picture of a how model will look until its finished, and this was definitely the case here. But I am very pleased with the results and its gotten me excited to finish off the project. I had meant to stop once I hit 500 points a side and could play a small game, but I think I'm going to have to go on and finish the Ghar command crawler.

Labels: Beyond the Gates of Antares, Ghar, Painting, Warlord Games