Progress Report - Beyond the Gates of Antares

Since I finished my Siege Campaign I haven't been entirely idle. I have been working on the models from the Beyond the Gates of Antares starter set that I got back in November of last year. It's been less than a year since I got them which, for me, is a pretty quick turn around.

My plan is to get two 500 point forces done, which is the minimum size for a game, so I can give the rules a decent go. Depending on how well that goes, I may paint some more.

The starter set comes with two small forces, the Pan Human Concord and the Ghar Empire. It was the Ghar that drew me to the game. They're weird, little, angry, mutant creatures that go around in big battle suits. In contrast, the Concord are relatively normal humans in sci-fi armour. 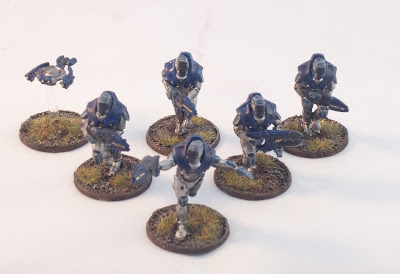 You actually get 750 points plus of Concord in the starter box, which is really quite silly good value. So I didn't need to paint the lot to get a game worthy force. But it felt dissatisfying to paint 3/4 of the models and so I pushed on and painted all four squads.

You get four identical sprues of Concord troopers, each of which has four troopers, 1 medium-sized drone and two small spotter drones (both of which hover on flying bases). Rather than try to turn each sprue into one squad, I tried mixing and matching the pieces so that the poses came together more naturally. This left me with two squads running, one advancing and one standing and shooting. I also ended up with 1 squad of 3 support drones and one general purpose drone with a Subverter Matrix (a kind of scrambler).

I was not a fan of the white and green colour scheme of the official Concord models, and ended up taking inspiration from the rulebook cover art, which makes them look more blue. I gave them all a spray of Army Painter plate mail metal, which I washed with Games Workshop Nuln Oil ink. The blue areas were Vallejo dark Prussian blue and field blue, with Games Workshop Asurmen blue wash and then highlighted in Vallejo Prussian blue and a mix of field blue and sky blue. The black areas were actually Vallejo dark grey with Nuln oil washes. Overall, I'm pretty happy with the results.

Despite me dismissing the Concord earlier as generic humans, their background is a bit more interesting. Concord society is made up of planets covered in a cloud of microscopic nano-machines that interface with the humans. This forms an artificial intelligence network made up of the collective needs and desires of all citizens. But this network also manipulates and controls humans at a subconscious level so they don't truly think for themselves. The result is either a truly democratic or completely tyrannical society, depending on how you look at it. 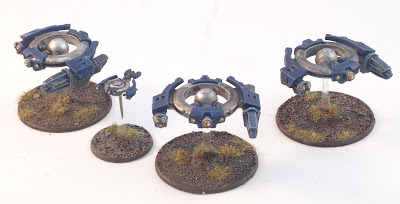 In fact, the only element of the society with any kind of free-will is the army, which operates outside of the nano-cloud, forcing its soldiers to think for themselves to a limited extent. Generally when the Concord encounters another society, it spreads its nano-cloud to it and takes over, integrating them into itself. This only fails with life forms that are incompatible with the machines or which actively resist. So my collection really represents the fringe of Concord society, only used when the usual approach has broken down. 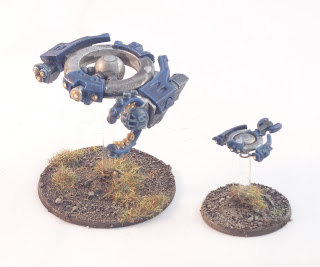 
Overall, the Beyond the Gates of Antares is less overtly dystopian than Warhammer 40,000, as well as being harder sci-fi, but maintains a level of moral ambiguity. The concord reminds me, faintly, of Iain M Banks Culture novels, in that its a huge, semi-utopian society, that conquers mostly through stealth and manipulation, including of its own population, but it is not a straightforward tyrannical empire like the 40K Imperium. I think I'm going to have fun dabbling in this universe.

Labels: Beyond the Gates of Antares, Painting, Warlord Games