So I have finally taken the plunge and grabbed a copy of Fate of the Forgestar. Or, more accurately, split the cost and contents with MLB with him taking the Marauders and myself the Forge Fathers. I wrote a little while back that the contents of Warpath's starter box failed to inspire me, but a 40% reduction to £30 from Dark Sphere overcame that objection rather comfortably. Whether the reduction indicates the inevitable failure of the game, Mantic as a company and possibly the entire wargaming industry or whether Dark Sphere simply picked up a few too many starter boxes remains to be seen. But for £15, I felt it was worth a punt. 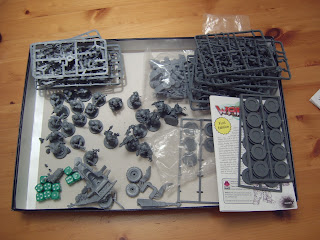 In terms of sheer numbers, MLB has done rather better than I have. He got 40 Marauders and a Raptor, for my 20 Forge Fathers and a Heavy Hailstorm cannon. That said, five of my twenty are veterans made from plastic-resin and in points terms we are pretty close to even. I have also benefitted from a bonus five forge fathers thrown in. Actually there are six, but as you can only use squads of five and there are only enough bases for five I give Mantic props for not advertising six.

The plastic troops are rather better than I expected. Much has been made of Mantic reusing their fantasy sculpts, but it works better than might be expected. In the case of the Forge Fathers its barely noticable, with only the backs and legs and optional heads coming straight from Kings of War. The legs integrate nicely with the stylised armour and the addition of some goggles take off the fantasy edge of the bonus heads. That said, that half the squad have cloaks is a little odd. They have also inherited a problem from the Fantasy dwarves, the pieces don't quite fit together properly meaning you either have to file down the backs or put up with a small gap between pieces.

The Marauders have proven a lot better than expected. It helps to see both types of sprue, the one with two bodies and the one with three. They are clearly intended to work in combination as the two body sprue comes with a number of spare heads, weapons and accessories that help customise the rest. With a little imagination and effort you can easily put together a good variety of decent looking poses.

As for the rest, the resin plastic is solid, free of flash and mold lines and sticks comfortably with super glue. On the down side, not all pieces fit together as well as I would like; the raptor is going to need some filing work and the veterans heat cannon cables do not in any sense join up with their back packs.

We haven't had a chance to try the rules yet (we only got them last Saturday) but they seem refreshingly straight forward. There is something rather appealing about the idea of a game we can get through in an hour or so without masses or page flipping and cross referencing. I am very much in favour of Mantic's commitment to getting everything into as few pages as possible. The presence of vehicles and multiple weapon types within a squad add a little complication over Kings of War, but nothing particularly confusing.

Also in Mantic's favour is the inclusion of a double sided scenario sheet designed to use the models in the box and with summary rules for all of them. Something that Games Workshop pointedly failed to include in Isle of Blood. The sheet does call the set Fate of the StarForge on a couple of ocassions and, less forgivably, fails to include the rules for the Anti-Tank gun on the Marauder Raptor, but, overall, it is a highly welcome inclusion and ensure that the set can function as complete game. That said, any truly new players are going to need to invest in some dice pretty soon, the box comes with ten but the Heavy Hail storm cannon alone rolls 16 for each shot. This is a definitely a "buckets of dice" game.

I am certainly looking forward to getting everything assembled and painted and giving it go. Is it worth fifty quid? Based on what I've seen so far, probably. Is it worth thirty? Most certainly.