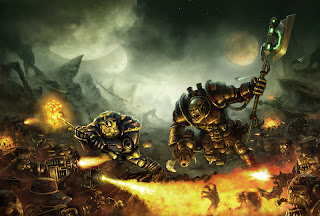 Last night, after some frantic last minute sticking earlier in the day, MLB and I played our first game of Warpath. We used the miniatures from the box and the sample scenario with a few bits and bobs of scenery dug out of my cupboard.

The focus of Warpath and Kings of War has been on simple rules that allow big battles with a minimum of fuss. But there is another side to that, playing small and medium sized battles extremely quickly. We got through the game in less than an hour and that included checking the rules a few times. The rules are basic, but flow very nicely and logically. We didn't come against any situation were the rules were less than clear or obvious or where different rules clashed.

The potential drawback is that it could become quite stale and repetitive with limited tactical options. I'm not sure yet. With the forces in the starter box, the Forge Fathers are heavily outnumbered, but have far superior long-ranged weaponry, while the Marauders have to use their numbers to weather the heavy fire and get into close combat where they will pretty much slaughter any of the Forge Father units. That could get repetitive very quickly, but I'm not sure how much some additional units will affect the game play.

MLB took the first game, losing two units of Marauder Grunts and his Raptor before ultimately slaughtering my Forge Fathers with his remaining two units. I think my mistake was in concentrating my fire on his damaged raptor and one grunt unit on turn two and leaving two more units unscathed.

This is the essential tactical dilemma of the game. Individual miniatures are not removed, instead each unit accumulates damage. At the end of the shooting and close combat phases units that have been damaged this turn must test their nerve, with a failed test suppressing or destroying the unit, depending on how badly it is failed. What this means is that no matter how effective your shooting you can't be sure of eliminating a unit until the end of the phase and you can always pile on more damage. I was concentrating fire to make certain that a unit would be removed, when I would probably have been better off spreading out fire and getting chance at removing several units. As it was, the two Grunt units that survived the game were completely unscathed.

If spreading you fire across multiple units is effective then it makes tactically advantageous to have lots of small units rather than a few big ones. Although smaller units can take less damage individually, you can spread their fire across multiple targets more effectively. Something to think about for the next game.

Warpath has been criticised for its simplicity, but I found a welcome lack of complication for the sake of it. There are games that are justifiably complicated, because they intend to simulate small actions in great detail, Infinity is a case in point. Warpath seeks to do the opposite, simulating larger actions in no more detail than is necessary. Whether it has the balance right is difficult to determine from one starter game, but so far, it feels refreshing not to get bogged down in detail.

It will take a few more games with a larger number of models to determine whether Warpath has the balance between detail and quick play right. But if you want a quick game with a minimum of fuss and bother it seems like a good system.