Randomness is stranger than Fiction

For reasons I intend to go into at a later date, I have been looking over the Warhammer 3rd edition army lists in Realms of Chaos. If you thought that the warband rules were random, capricious and unfair you haven't seen a thing. Parts are familiar, there's a selection of units that work much like units in regular armies, with the exception that most of them have to be used in multiples of their chosen Chaos God's sacred number (which must have been great fun for Tzeentch players, whose number is nine, in an era when minatures came in packs of four).

Things start to get weird when you look at characters. There are no standard characters, only Chaos Champions all of which must be randomly generated. For 100 points you get a random base profile, d6 chaos rewards and d6 chaos attributes. Or you can roll on a random table of pre-generated champions. If you want a wizard, you'd better generate one. You can upgrade them, but this means more rolling. For 25 points you can roll on the steed table, for 25 more you can roll for a weapon. You might get a daemon weapon, but then you might get a club.

But this is in no way the maddest part. You can chose to make some or all of your army from randomly generated chaos warbands. These are generated in exactly the same way as a standard warband. Generate a champion, give him rewards and each reward gives you a chance of some followers. Slaves to Darkness makes some concession to reasonableness by requiring you to pay points for each roll, but the Lost and the Damned turfs this right out of the window in favour of having you choose an aspiring, mighty or exalted champion at 200, 400 or 800 points, giving you d4, d4+4 or d4+8 rewards. This, at least, means a mighty champion will definitely get more rolls than an aspiring one, but it still means you can pay 800 points for a human and 6 goblins or 200 for a dragon-ogre and has friends.

There is absolutely no interest here in using points to create balanced and competitive armies. The only reason to use the points is to place something approaching a boundary on the army. For 3,000 points you get 1 exalted champion, 3 mighty champions and 5 aspiring. Get rid of the points and you'd be rolling forever.

It's easy to think of this obsession with d100 tables as specific to Realms of Chaos and, certainly, it's particularly prevalent here, but it does appear elsewhere. In the early days of Warhammer 40,000 Rogue Trader there were no army lists, forces were largely randomly generated and a Games Master was expected to devise scenarios. Conventional battles with army lists came quite a bit later. Though even these retained some of the random elements. The first Warhammer 40,000 Ork armies mostly used random equipment tables, you didn't pay points for a weapon you paid points for a roll on the weapon table. 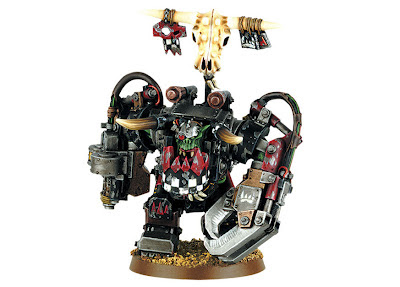 But this is how he looked in first edition. 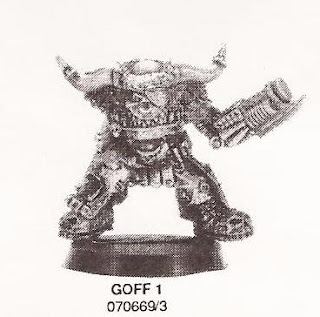 Ghazghkull is currently the Ork's foremost special character. Raised to the exalted rank of Warlord by virtue of a head injury that gave him an adamantium skull and a direct line to the Ork Gods of War. But Ghazghkull began life in White Dwarf 134 as the general of the studio's sample Ork army. Andy Chambers selected a warboss and randomly generated his equipment, including a roll on the painboy bionik bitz table. That meant rolling on a sub-table to determine which bit Ghazghkull had had replaced and then a second roll to see what special effect he picked up. This gave Ghazghkull a steel skull and a fearsome headbutt attack. But, because of the rules for head injuries, it also gave him a chance of re-awakening a dormant psychic power. Ghazghkull got lucky and picked up the Hammerhand power which gave him a close combat boost when successfully used.

Modern wargaming is often presented as a straight-forwardly competitive exercise. It's easy to forget the debt that Fantasy and Sci-Fi wargaming owes to Roleplaying games, which themselves grew out of historical wargaming. The first editions of Warhammer and Warhammer 40,000 started out more as combat heavy roleplaying experiences than battles between armies, for a start, both included Games Masters. Wargaming can be as much about story-telling as competition.

Truth may not be stranger than fiction, but sometimes random generation can lead to the creation of something you would never have invented from scratch. Some well placed random tables can do wonders to spark the imagination. More than that, a random army/warband requires you to work with what you're given, developing ideas and concepts around the resources provided rather than having a complete run of every troop type available.

There are a fair few wargames built around story-telling, particularly the GW specialist games, Mordheim, Blood Bowl and Necromunda, as well as Mongoose's Judge Dredd game. All of these have campaign gaming built in, the idea being to take a gang/squad/warband/team over a series of games. However, most of these give players total control. The only exception I can think of is Two Hour Wargames' Warrior Heroes - Armies and Adventures, a game which has more than a few things in common with Realms of Chaos. As well as being based on a randomly generated character and his followers, it's also not as tightly written as it could be and requires a fair bit of work by the player to get maximum value out of it.

WH:AA seems to be quite popular at the moment, with several blogs out there dedicated to the exploits of the random heroes, all of which focus on story-telling more than rules. Which tells me that there is an appetite out there for more story-focused gaming and, perhaps, it's time for a bit more randomness in wargaming.