It has been quite a productive year for me in wargames terms. I got a few games played, a lot of miniatures painted and a a lot more blog posts written and even read. I haven't quite hit my once a week target for new blog posts, but I've been not far off and a lot more prolific than last year.

This time last year, I put forward some predictions about where wargaming was going in 2011. With the year at an end, it's time to investigate and see how many, if any, I got right:

First the Games Workshop specific predictions
So 0 out of 4 and no points for nearlies.


On to the more general hobby predictions.
So 2 out of 4, maybe 2 and a half if you're feeling generous. It seems I am slightly better at predicting general trends than the actions of Games Workshop, but mostly that I suck at predictions.

Given that, I have decided to only make predictions that are incredibly unlikely to come true so that, in the unlikely event that I turn out to be right, I will look like some kind of prophet and can found my own religion.

With that in mind here are my predictions for 2012:
2012 has actually been quite an eventful year for wargaming. Games Workshop finally abandoned metal in favour of Resin, sorry Fine Cast, which divided the community, mostly because the roll out was a complete cock up. However, they weren't the first to see the high cost of metal as potentially fatal, Mantic and Black Scorpion have both made the switch to Resin.

The trend towards skirmish games continued and the subject matters diversified, giving us the renaissance era Carnevale and the Japanese inspired Bushido. With the size of this market, I start to wonder how many of these games will make it to 2013. At the same time, Gripping Beast and Tomahawk studios launched the highly characterful Saga Dark Age skirmish rules, suggesting that even the Historical community may be moving towards small scale games.

Games Workshop's pushed bigger and bigger monsters for Warhammer, culminating in Storm of Magic, a supplement that pushed big plastic beasties for everyone and which boasted a colour pallette inspired by a primary school art class. Their less than successful foray into naval wargaming has been mentioned above. 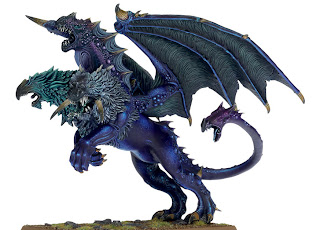 Mantic finally launched Warpath, a futuristic sci-fantasy wargame in no way similar to Warhammer 40,000. They expected a lot from fans, offering pre-orders before any models were even seen. The Forge Fathers, when they arrived looked okay, but the Marauders used the Fantasy Orcs sprues as a base and suffered criticism for looking unlike the concept sketches and featuring too few poses. That said, the early images of the Corporation models look stunning. At the same time, Dwarf Kings Hold proved to be a massive hit, showing that their is still a market for quick play self contained games.

Overall, a year of diversity and contradictions. The rise in metal prices pushed up the prices of models and forced the switch to new production models. All highly favourable for skirmish games. At the same time, the rise and rise of plastic continued unabated, and Mantic and Games Workshop continued to go their own way pushing for bigger and bigger games. If anything gamers are now spoiled for choice with more games and models than ever before, more easily available through the Internet then ever before, even if some companies really need to sort out the websites.

2012 promises to be a busy year for me. I still have a number of projects left over from 2011. This time last year I was only working three days a week, which at least gave me plenty of time to paint. Now I have more money and less time. That said, I have my hobby room the way I want it and have actually been getting on with things. All going well I should have a few new things to show off soon, more pictures, hopefully more battle reports and, once I get my act together, more posts on old White Dwarfs. So watch this space and Happy New Year.