From my painting table

I have had two major painting projects on the go since just before Christmas, both of which will be revealed in due course. But for today I wanted to talk about Infinity.

Infinity's Anime/Manga aesthetic and hi-tech Sci-Fi look have appealed for some time. I have actually have two decent-sized forces, one for the Nomads and one for Yu Jing, but I haven't really know how to go about painting them and they have been sitting around neglected. In December of 2011, I finally figured out how to proceed and here are the results: 5/6 of the Japanese Sectorial Army starter box. 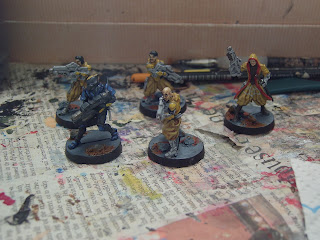 The aesthetics of Infinity is quite different from that of most other games I have played. Just about everything is armoured, but not in the huge bulky style of GW Space Marines. They are very intricate designs with a lot overlapping areas and narrow gaps between armour plates. My general painting style has been to paint each large area in a different colour, but that doesn't really work when there are no large areas.

I am used to painting areas of cloth, which need multiple levels of highlighting to pick out the changes in colour over raised and recessed areas. But here we have a lot of essentially flat, smooth areas sitting next to one another. Limited opportunity for highlighting, but I needed a way to pick out the differences in areas.

Still, painting a new style of model encouraged me to try some new techniques. I ended up limiting my highlights, and using a lot of ink washes. I have used them before, but sparingly, usually on faces or rusty armour. I have never been able to get them to work well, often making models look dirty or disappearing entirely after a few highlights.

Here, though, they worked perfectly, picking out the details on the armour and differentiating the different areas nicely.

My second painting experiment was to try Games Workshop foundation paints. I had decided on a yellow colour scheme for my Kempetai and Keisotsu Butai. I was inspired by a video game, see if you can guess which. I have always struggled to paint yellow before. It doesn't paint over black undercoats at all and, when used over white, often seems to come out very glossy and unreal. But the GW foundation worked perfectly over my black undercoat and I am very pleased with the results.