With so many more of my Infinity models painted I have been turning my attention the actual game. Despite having had the miniatures for over a year I have only managed one game so far, with My Little Brother, and we got a lot of the rules wrong. I have in mind to try a practice game against myself in order to get my head fully around the rules and so I have been re-reading the rule book.

Infinity: the Game has attracted considerable praise from some quarters and it certainly has a number of distinctive features that particularly suit it's small scale approach to future warfare. That said, it also has a significant flaw. It's not that the rules are poor, but they are extremely hard to follow.

This sort of criticism inevitably attaches to games that have been translated from their native language. The wargames industry being far enough from the mainstream that they have to communicate by email, it can't always afford the highest quality localisation. That said, in my experience, a translated rule book, though often featuring a few linguistic quirks, can, on occasion, be even better explained than rule books in their native language if only because of the need to be precise. Confrontation 3rd edition and Anima Tactics have both struck me as rule books that do an excellent job of presenting the rules in a clear fashion.

Despite their success with Confrontation, Rackham also managed to produce one of the worst written rule books I have ever seen, for their skirmish board game Hybrid. To give an example of how poor this book was each miniature in the game had a single 'Natural value' that was used to determine most of their actions. Although it was possible to make an educated guess, it took an errata in the games expansion to spell out where to find this number on the miniatures stat cards. For anyone with a copy who actually wants to play Hybrid I would recommend exploring Board Game Geek to find example of the rules re-written by fans into something passing for coherent.

However, Hybrid's faults are not a problem of translation but of presentation. The book simply fails to clearly spell out how they work, relying on players to fill in gaps the writers have neglected to explain. This is a problem for all rule books, not simply translated ones.

Turning our attention to rules written in English, not simply translated into it, I have written before about the tendency of modern Games Workshop to gloss over crucial rules questions that need answering in an attempt to shorten the text. In contrast, the DBA/DBM/HOTT school of thought relies on hyper-precise sentences that, while covering absolutely every possible circumstance, practically require a degree in Logic to unpick. For example:

An element in front combat with an enemy flank or rear edge, or aiding an attack on a stronghold, disregards the outcome listed below, but recoils if a friendly element in contact with the enemy's front recoils, flees or is destroyed or enscorcelled.

Infinity's problem is somewhat unusual. It is all about layout. A very strange problem as throughout the extensive background sections the various sections and sub sections are clearly labelled and divided. But when it comes to the rules, tiny text is seperated by less than explicit headings. One section blurs into the next and figuring out where to find the actual rule you are looking for is extremely difficult. When reading the rules through from start to finish this is not so much of a problem, though small text can cause eye strain and some sentences require a couple of read throughs to sink in. But when trying to find what you're looking for in the middle of a game you are lost, stuck in a rules Antarctica with no compass, no map and no frame of reference.

Warhammer 8th edition gives whole, clearly differentiated, chapters with massive page headings to the different phases of a turn. In contrast, the only think separating shooting from close combat in the Infinity rule book is a one line header in capitals, not even in bold. And this is one of the better labelled sections. Trying to find the rules for a specific key word listed by a model's profile is all but impossible (though when you find the right section it is at least ordered alphabetically) and made worse by the fact that certain common words, the difference between Impetuous and Non-Impetuous models, is somewhere else entirely. A somewhere else that doesn't appear to be in a section, orphaned and free floating by itself. 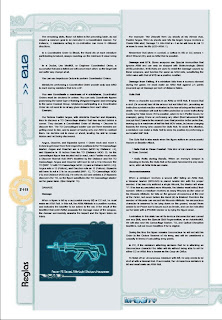 The above page spread is taken from the free PDF version available online, the colours are different and the book says "Rules" and not "Reglas", but the layout is the same. We have Damage as a heading and a sub-heading, though the heading is hardly clearly labelled. Bold is used for first emphasis and these lines often stand out better than the titles. Then we have the apparently random use of bullet points in the second column and the paragraph first line indentations that serve no useful purpose at all.

What this says to me is that a good, even great, rules set can be seriously harmed by being conveyed poorly. This can be because of bad writing, bad translation or simply poor presentation. Reading the Infinity rules end to end is not so bad, but as reference work to be used in the game it is hopeless. When trying to play you want to minimise time spent rummaging through rules and the worst possible outcome is not being able to find a rule at all.

In the case of Infinity is could have been fixed so easily. Use bigger and bolder headings, make better use of bold and bullet points, make text larger and clearer and include an index, if only for the rules section. The contents page is, at least, better laid out and does help, but only if what your looking for has its own heading.

I will persevere with Infinity, the rules, setting and models are too strong a draw, but Corvus Belli have done themselves no favours with the way they have presented them.