As it has been two months since my HeroQuest retrospective I think it's time for another, although this one is less a look at an old favourite and more a look at a game I never quite got around to playing.

Fairy Meat was produced by Kenzer & Co, a US company better known for their roleplaying products and probably best known for the long running RPG themed comic Knights of the Dinner Table. Fairy Meat represented a rare foray for them into wargaming. Written by Scott Leaton, it had one unique selling point: Fairy Meat was billed as a 1:1 scale wargame, that is to say the 'miniatures' were life size.
Themed around battling groups of fairies who would not only kill but eat one another to restore health, Fairy Meat had its tongue well and truly in its cheek from the front cover, depicting a classical fairy chewing on the arm of a rival (this particular fairy would suffer a number of grizzly fates on the covers of the subsequent supplement books). The tone continued with a byline that credited two fictional characters (from the KODT comic) and went on to list suggestions as to where to play the game ("A local forest preserve", "that filthy mess you call a bedroom") and where not to ("The middle of the road", "Prison(unless you're already there)"). Fairy Meat was not a game that could be taken very seriously. 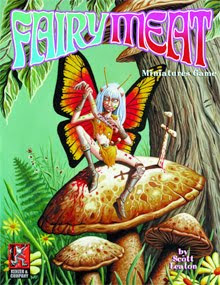 The 32 page rulebook was printed in two tone colour with fairly cheap stapled binding, but it did come with a series of card inserts, including counters and record cards. It also included a set of cut out fairy stand ups and cardboard wings to stick to your existing miniatures, suggesting that Kenzer and Co did not initially intend to produce a range of miniatures of their own. The rules themselves contained a number of innovative ideas. Included using a deck of playing cards instead of dice and the idea that kill and life points (essentially attack and defence) doubled as wounds, with fairies converting each into 'meat' when injured, meaning that the fairy's fighting ability diminished as it was injured. It's most enjoyably quirky feature was the ability to regenerate life by eating other fairies. On death a fairy was replaced by their meat counters which could be collected and fought over by other fairies (friends or enemies).
The book was quickly followed by range of miniatures. The first batch of fairies were well enough sculpted and demonstrated a good range of the fairy weapons, but suffered from someone bland facial expressions and a lack of character. The second range of five were a substantial improvement with a quirky, cartoony appearance a range of gleeful facial expressions. 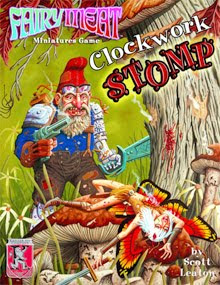 A much fun as the first book was, the real fun came with the first supplement, Clockwork Stomp. This introduced the Gnomes: Physically slow and lacking kill points (leaving them unable to fight hand to hand) Gnomes were rendered effective by their range of lethal hardware including the Torcheon (Flamethrower), Hand Cannon, Riddlegun and the legendary Chain Killer Auto Cannon. They could also be kitted out with bionic parts and be accompanied by cyborg clock fairies. And they were huge, more than twice the height of a fairy and considerably more bulky.
In common with a number of Kenzer and Co products (and to be fair those of many small publishers) there was a sense that you were paying a lot for relatively low production values. The rulebooks 32 pages cost me £16.99, back in 2000, more than the Malifaux rulebook today. The miniatures also seemed expensive in their day, fairies were £3 each and the Gnomes a hefty £16.99. Having said that, the latter weigh a ton being almost solid metal and it is inconceivable that they would cost so little today. They did, however, suffer badly from flash and some truly horrible mould lines and I had to do considerable work with greenstuff to fill some conspicuous gaps.
Kenzer and Co introduced the game with a promo comic strip in KODT that saw several of the regular characters playing the game. Having been a fanatical KODT fan for some time I snapped it up from my Friendly Local Game Shop along with the first batch of miniatures in spite of the expense. However, a lack of further support from the FLGS limited by options and the game languished for a while. was to pick it up again (from a different shop) after Kenzer released the excellent (and far better value) starter set which contained starter rules, two supplements (including Clockwork Stomp), the second batch of fairies and a bunch of extra counters. 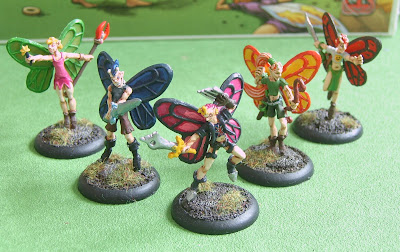 My first Gnome was another quick buy from the FLGS, but my second and third came, oddly, from a holiday in Washington DC, where I scooped them out of the Bargain bin of a game shop in Georgetown for $10 a piece, reasoning, correctly that I would never get another opportunity.
Unfortunately, models have languished unpainted ever since on my "plan to do something with eventually" list. Well I finally got round to it, painting up seven fairies and two Gnomes (almost). It's long overdue, but hopefully I will soon get a chance to put a sadly overlooked and refreshingly quirky game to the test. 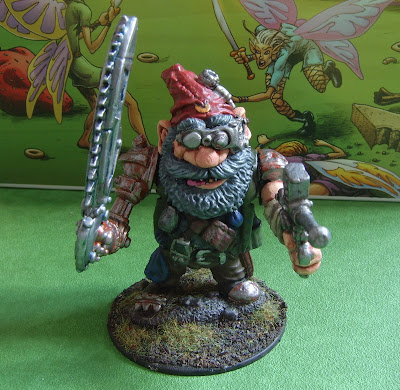